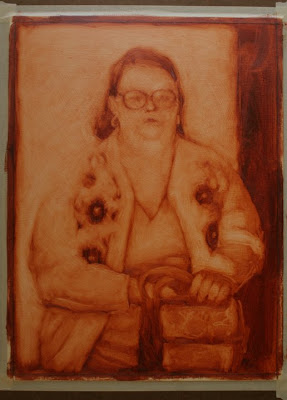 I got right down to business today in the studio. By 9am (!) I was at my easel working on the above underpainting. It was a tough one actually and took me much longer than I expected it would. Once it was done I spent some time on the computer, had some lunch, considered going for a walk, but decided to go back to the studio instead where I promptly wasted another hour or so on the computer (should have taken the walk, but at least now I know everything about Gene Vincent and I also learned that Tara Reid is heading to rehab-important stuff).

However I did finally get back to work and did another small-ish (12x16) underpainting (below). This one marks the first one in this series that I have done on my favorite surface-a birch panel, rather than the gessoed paper that I've been using for these. There were two reasons for the switch. First, I have been pretty happy with these so far and subsequently found myself stressing about how to possibly display them, frames, etc. They may never get to that point, but it was something that was bugging me every time I pulled out another sheet of prepared paper and using the birch panels just whisks all those worries away. The other reason, the real decider actually, was that I didn't feel like taping up another piece of paper onto a board. 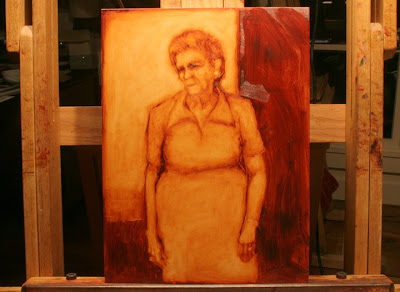 Oh, I love, love, love the older woman on the birch panel. That painting tells such stories of a life lived. Beautiful Tracy!

you are very far from lazy... great under paintings!

I think I like the look of them better on the birch - but haven't got a clue as to why.

I've started thinking of them as your "cardy ladies". Even when they haven't got a cardigan on, that's probably because they've just taken one off!

Thanks Melody, this lady sure is a character, glad it shows here.

Natalya, I can be lazy, but I do have my moments when I am not. However many of my shortcuts ARE due to laziness:)

Katherine, I think they look better on the birch too, although it might be the choice of images. But though the paper is finished the same as the birch is, it is still a bit different to work on somehow. More give maybe, which I don't like.