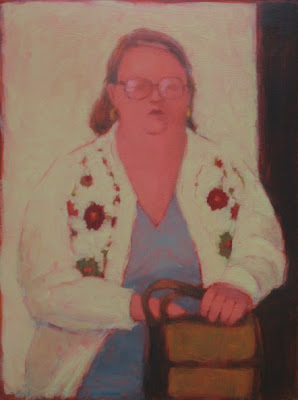 So I did manage to get quite a bit of painting done yesterday after all. I finally got the color on to three underpaintings that have been sitting here in the studio for nearly two weeks. The ones that have making me feel really lazy during this entire last week. You know, for trying to have a holiday without working in the studio.

I am still feeling giddy from last night's late night painting session as my true calling is to be a night painter! Alas, real life is suspended right now during school vacation and so the possibility of night painting will end next week when I must start my days before 6am which will render me totally unable to see clearly after 8pm, or 10pm if I am lucky.

Anyway, this painting shown above is the first one I did yesterday. It's another portrait of my favorite unhappy looking woman and I like this one much better than the first one I did of her a few months ago. Doug says it's a little creepy and somewhat disturbing and I take that as a high compliment.

And in other news (about me, of course, what else is there, heh) I got second place in Making a Mark's Best Portrait by a Female Artist. Thanks to everyone who voted for me! I really was excited to have this new work nominated, but I also think that the piece that did win "Zen" by Nicole Caulfield, deserved the top spot. I actually might have put "Paul" ahead of myself as well. Katherine has also awarded me the “Tales from the Frontline” Mention in Despatches / The “Amusing Musings” Trophy for 2008 in her end of the year awards and I am very excited to add a new trophy to my shelf full of 30 year old bowling trophies. Especially if it is a virtual trophy and not a shiny statue of a bowler with some sort of tacky, yet very glittery five inch high base.

Thanks Katherine, you have been so supportive of my art and also of my little blog here. I really appreciate it!
Posted by Tracy Helgeson at 11:51 AM

It's a design your own trophy sort of trophy Tracy!

Julie Oakley created her own badge when she won the "Get off your Blogging Bottom and Sketch Brass Plate" in 2006!

I'm very happy to support your art and your blog - both give me great pleasure. :)

creepy and somewhat disturbing? words I cherish. I agree, high compliment. Night painting is the absolute best, why can't the kids school start at 11:00 am? Congrats on the award!