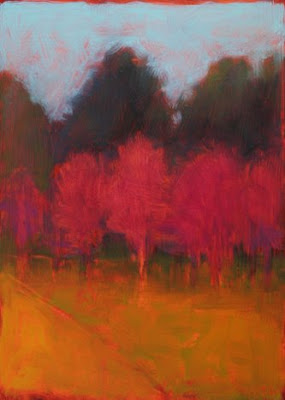 In the 100 Things post yesterday, I made mention of telling the story of how I came to kill and prepare an animal to eat. It's kind of a long story, or at least I will make it into one (heh), and it also involves some things that perhaps if you are related to me, you probably should not keep reading!

By the time I was 17, I had been in three foster homes, as my mother was unable to care for my sister and I. The first one was a friend's house and I was there for about 2 years until her step dad starting drinking too much and taking out his anger on me. Then I went to live in a young couple's home. They had very young children and were also VERY religious. I was only 16 but already had some opinions (pro-choice) that they were offended by and after about nine months I was sent off to another home. The third one was a really good one, my sister had been there previously (we were never placed anywhere together) and I already knew them. They had four kids and it was pretty easy to just fit right in, which I did for awhile. But by the end of 11th grade I was fed up with the whole system, with being told what to do, where to live, and when to move. I was also starting to drink a little bit and had a boyfriend too, which fueled some rebellion in me. So I acted like the troubled immature child I was and just up and moved out one day. First I shared a place with my boyfriend but that didn't last long, so I got my own two room apartment with a bathroom down the hall that I shared with two other women that I never actually saw. I reaffirmed to myself that I wanted to finish high school, go to college and make something of myself, so I became an emancipated minor. There were some legalities involved and I had to agree to a visit from a social worker each month. I worked two jobs in addition to going to school, but after a few months it became really tough to handle the rent and I began to look for a cheaper place to live.

Around the same time that I turned 18 and had no one checking up on me any longer, I answered an ad in the paper for a room for rent. It was in a big old house out in the country, a few miles from the city where I lived, worked and went to school (Rochester, MN). It would mean more driving and gas, but the rent was only a hundred dollars a month including utilities, so I took it. But here is the bad part: the occupants of the seven other rooms were all men. My mother tried to stop me, but even though she and I had kept up our relationship, it was tenuous at best and I was not interested in hearing her advice about anything. The owner of the house was good guy, worked as a wrestling coach and teacher at the local junior college and then there were a variety of other guys living there. At the time they seemed so much older than I was, but really they were mostly just babies too, in their early 20's, trying to figure what to do with their lives. I became buddies with them, and they were fun. There was always a wicked game of pong going on in the living room and we shared many meals together. There was also a lot of drinking and several few parties in the barn that required the rental of a beer truck, but honestly that wasn't exactly unusual at that time.

I moved to the house in January of 1983. By April, I had started to date a friend of one of my roommates, His name was Jeff, but for the life of me I cannot recall his last name anymore, and this really bugs me for some reason. Anyway, Jeff was in a band and they practiced in the barn at the farm. I used to watch the practices and when the band played at a few local bars and parties, myself and the other girlfriends tagged along. Ok, I was a groupie, fine, I admit it. Heh. I can still remember the songs they played; Crazy Train, White Wedding, Lay it on the Line, La Grange and we all thought the band was incredible, awesome, they should have a record deal! I painted a backdrop for them (hmmm, I can't remember the name of the band now either...) and I gave Jeff, who played lead guitar, a pair of nylon parachute type pants. Then I spent a month's rent on a pair of leather pants for him too. There were a lot of bandannas tied to the forearms, near mullets, Sammy Hagar videos, and way too much drinking. I won't go into all the details about that, but even though we all did some very reckless things, we were lucky and nothing bad happened.

Anyway, what does this have to do with killing and preparing animals, you say? Not much actually, just setting the scene. In that same spring, one of the older roommates, Dean (he was all of 25), bought a load of maybe 50 live chickens, though it seemed like a thousand at the time. He offered to share them with whoever would help kill, pluck and prepare them. Since I had spent all my money on leather pants for the boy whose last name I can't remember anymore, I volunteered, along with a few other roommates who needed food too. Dean showed us all how to kill the chickens. I won't get too specific, but we all killed at least one chicken. It was horrible, yet also somewhat fascinating. However, none of us were into killing more than one and so Dean did the rest, he had been raised on a REAL farm. We had a kind of assembly line set up. Someone else put the dead chickens into a pot of hot water, then plucked them. Dean showed me and a guy named Phil how to cut them open after they were plucked and pull out the insides without spilling the contents of the gizzard, something that I think I could still do properly if I had to. And then someone else took care of the rest (legs, neck, etc, sorry) and put them in freezer bags. We kept a few out for a bbq later that evening and I still can recall how good those chickens were. Even though I couldn't bring myself to kill more than one chicken, I did my job well that day and we had a full freezer of fresh chickens for awhile at least.

So that's my story. I couldn't imagine chopping off a chicken's head now (we are planning to raise meat chickens next year and they will definitely be going to a slaughter yard for that part) but I have euthanized a few of my sick egg layers and I always feel horrible about it after. I can't quite believe that was me then, but I guess it was. Sometimes I can't remember who that girl was at all and she seems so distant as I sit here and write about this tonight.

PS. I actually managed to graduate from high school that spring, and by the end of June I was feeling very restless again. I had been accepted to the Minneapolis College of Art and Design and just decided to pick up and move up there a few months early. Another pretty dumb decision, and it wasn't my last, though eventually I managed to (mostly) become the person I always thought I should have been in the first place. I kept up with a few of my farmhouse roommates for awhile, but now haven't heard about anyone for many years. I'd google them, but alas, most of their last names have slipped away from my memory too. I saw Jeff once or twice after I moved to Minneapolis, but then I heard he went back to live with his parents who were very devout Jehovah's Witness. He had been having his own kind of rebellion I guess.
Oh and I am still very close to the third foster home family that I lived with. We mended our relationship, (meaning they understood my problems) and we all went on. They have been a part of my life ever since and I am very grateful for that.
Posted by Tracy Helgeson at 10:40 PM

So when are you writing this book?

Clearly you already have the title.

I second Kesha. Way to WRITE, Tracy. You have a wonderful way of framing things... and of being funny and sad at the same time. Loved it.

Tracy, You're a gifted writer and artist. Amazing.

I'm with Kesha... a book is what came to mind as I read this.

Hehe, It would be a great title, but I suspect Ozzie might try and stop me from using it:)

Thanks Diane and Janelle, i have always liked to write and this blog format really works for me I think. Thanks for the encouragement.

Oops, crossed comments with you Mary Ann. Thanks, and book is fairly high on my list of things to do. Not necessarily a book about my life, but maybe that is a good place to start. Just wish I could remember more!

Hey - I was sent over here by the 100 things post from Madame K. Great blog! And I was in foster homes too...but much younger - kindergarten/1st grade. I was in one with a hella religious family and I sorta stay the heck away from religion now.. but that is another story for some other day.

Have you heard of Mike the Headless Chicken?? It's real and it's here in CO. Check it out! Your chopping heads off of chickens reminded me of it...

You are one brave woman! And what a girl you were. I had to struggle to find my way after my mother died and left high school early in order to go to art school. It sounds like your life came together.

Shanster, thanks for the link, funny! Tough to be in a foster home so young, hope things got better for you after that. I look forward to reading through your blog!

Thanks Angela, I was looking for some pictures from back then to post, but couldn't find them, had to just settle on another painting:)

Thanks Patricia, I am not so sure I was brave, more like naive, optimistic and maybe a little stupid thrown in:) Sounds like you had a tough time, and also found a way to get though it...

Great story Tracy. I really enjoy your writing-and how your personality shines through. Happy Holidays!

Tracy, I just want to put my arms around you and give you a big hug. That was a sad story to read ( whenever children are separated from families is so sad). You certainly managed to get through it without making detrimental choices....your art is wonderful, and it's true, you do have a very entertaining style of writing. What gifts you have!

I agree about writing a book, though I am reading this much longer after most people have. And add some of your work, like the paintings like Edge of the Yard and Two Door (off the cuff favorites).

"Crazy Train, White Wedding, Lay it on the Line, La Grange" - wow the memories, or more precisely, sort-of memories. Any time you are down, re-read this post and smile. Like an I-can-barely-see-the-world-because-I'm-smiling smile. You did good.