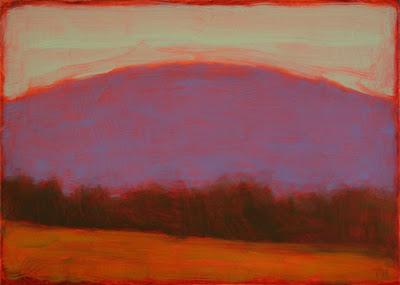 No Title Yet, I just painted it today!

Ok, I am going to make this quick tonight, it's my big TV night and The New Adventures of Old Christine starts in 40 minutes (love Julia Louis-Dreyfus).

Last week I wrote about trying to decide if I should go to the Vermont Studio Center and received much encouragement to go, which I really appreciate. Thanks everyone!

On Saturday, I decided I would go and even told a few friends that I spoke with that day. I was happy about my decision and really excited about working more on the figures as well as on another project that I have in mind that involves some interaction and a giveaway and would be perfect to do there. I was also excited about seeing my good friend Rachel, from last year. Her studio was next door to mine and she will be there again this winter.

Anyway, Doug had an awful cold which was giving him sinus pain, so I didn't want to spring it on him that I was going to go ahead and pay the balance of the fee while he was moaning in pain. We talked about it finally on Monday morning, and he was cool with it but later on I went over our finances and realized that it would be terribly irresponsible of me to take $1900 away from our bank account without knowing when or if more money would be coming in. My income has been quite spotty for the last several months and Doug's company is feeling the pinch too and when that happens, Doug is the last to get paid, which means that sometimes he doesn't for awhile.

When I started this whole full time painting thing, one of my limitations was that our family would come first. Mostly that just meant that I would only paint during the day while they were at school, or not scheduling shows during the summer months when they are home from school, but now I am finding that sometimes more difficult decisions must be made. Um, like you know, like not becoming homeless. heh. We are not to that yet thankfully, but one must stay on top of things and so that is what we are doing. The financial risk is too much for us right now and I would never be able to enjoy my time in Vermont knowing that so I have decided that I will not be going in February.

However, my husband is a saint and says he will take care of EVERYTHING for at least a month so that I can paint, paint, paint. Not exactly the same, and I am pretty sure that won't quite happen, but it's close enough and if I stick to a schedule I will do pretty well, I think.

So I called VSC today and rescheduled. They are very accommodating in these sorts of situations (what? artists with money issues? how unusual!:)) and offered me a very flexible payment plan which I was very tempted by. However, things are going to get tighter for us before they get better, even if there were a miraculous economic turnaround tomorrow, so I sadly turned it down. But I am on the schedule for January 2010 and am going to be optimistic about going then.
Posted by Tracy Helgeson at 7:18 PM

Just wanted to say hi, Tracy and encourage you that you will find the time to paint. This economy is certainly putting a monkey wrench in a lot of plans lately. I'll be checking back to see your figure pieces getting their color. Do you let a lot of underpainting show or do you glaze over it? They could almost be finished pieces. Ah, the eternal dilemma--how far to take it!

What a tough decision to make, and your husband is wonderful to offer to help you make an art retreat (of sorts) at home. I look forward to hearing about it when it happens.

Well, Tracy, your decision seems a good solution money-wise, this is what I would have done myself. But it might be difficult, too, because you will know you're at home, with family and home interferences. What about finding another artist in your area, willing to swap studios with you for a month or so ? Just a though...

Economy? I am f##king shaking in my boots. Yesterday the governor announced something about ending state property tax rebates PLUS cutting aid to education which means our huge property tax bill will not get smaller, and may, in fact, be several hundred plus more. We don't have any extra cash. AND, layoffs announced at Cornell, I sure hope we aren't affected by that, and my income? Who knows what 2009 will bring.
Best wishes to you both. Doug is sweet to help you with that plan.

that's tough one... but wise decision if disappointing, sorry... Doug is great, maybe you will get your own home residency.

Hi Tracy,
It sounds like you made a good decision, although tough! But avoiding guilt is important. You are invited to come paint in my studio in VT for a week if you want. I know it is no Studio Center, but I am a pretty decent cook :)!
Lisa

Hi Deborah, yeah, stupid economy, although I feel certain that some good will come of all this. Someday. Maybe.

Anyway, yes I try to let much of the underpainting show, especially with these. I would love to let the underpaintings stand as finished paintings, but there are some issues with that, which I should write about at some point.

Angela, yeah, he's a good guy and I am lucky to have a very supportive art spouse! I will definitely be posting about my "fake residency"!

Ghislaine, I think I a=can manage to get the work done, after all, when I began painting again a few years ago, I developed the landscapes working at home as well. Taking any sort of residency is just icing, frankly. Good idea about swapping studios, but not too many artists nearby, which is why I so enjoyed the residency-the social aspect!

So sorry to hear how this is all affecting you Gary, the taxes can really make things tough, that's for sure. You might feel better though if I told you how much our little hamlet's taxes are, not to mention the school taxes, oy...Guess we all have to just keep hustling as fast as we can:)

Natalya, I am disappointed but this is the right thing to do so there is no dwelling on it by me. I am lucky that Doug will do what he can to help, plus, I will get his input as I go, which is something I really missed while I was in VT last year.

Lisa, lovely offer of the studio but I have to tell you that I come with very loud, bad 70's music on my ipod! But I will certainly come and let you cook for me next time I get to VT:)

Its funny- when you posted your original comments on this I started to add a comment asking if they would let you reschedule! My reasoning was I remembered how you had a mini confidence meltdown after returning and I was worried it would affect your getting ready for your upcoming solo show- but its all worked out, and for the best it seems!

I'm just thinking how much more you will enjoy a residency in 2010!

Good for Doug - I'm wonder how many artists wish they had a husband like Doug!

Now - does this mean that the family have to fill all the parts for the end of "residency at home" dance? Those photos stick in my mind.........