In a true partnership of my current interests, I am currently spending my days painting in the studio AND tending to goats, chickens, kids and an expanded garden. The chores MUST be done each day but we also still need my income from painting, despite the fact that making art as a day job sounds completely ridiculous. And yes, the irony of voluntarily choosing two of the lowest paying professions has not escaped me either. heh.

Anyway, the farm thing is on track, well as much as something so unpredictable can be. And I am pleased to report that the art part is also picking up and while I hate to be TOO optimistic (at least not out loud and in print:)) I do have a feeling that there might be some shifts in the art world air. I had a very successful show at The Harrison Gallery in March marked by great feedback from the director and also by the fact that I didn't have to go back and pick up any unsold work, a good sign. They kept the few pieces left for their inventory and just shipped back a few of the smaller pieces that received NO interest. Always good to have some grounding, eh???

Last week I drove down to Piermont, NY to deliver about 15 pieces to a gallery/shop that has been interested in my work. This came about via a friend, which we all know is always the nicest and least stressful way for new galleries to come along! Piermont is a beautiful little town that is very close to NYC, in fact it is far, FAR closer to the city than I would normally prefer to drive myself, but I was trying to be a grown up about it all. The drive was actually without incident, although it was a bit crazy on the thruway just as I was getting to my exit. And even though the drive back was totally fine I did manage to give myself a really incredible tension headache and by the time I got home I thought my head was going to split open, took me a bit to recover from that. Turns out I might be too old and/or too delicate to drive 7-8 hours in one day.....

ANYWAY. The Outside In Piermont is wonderful. It is actually more of a shop than a straight up gallery, although they show some wonderful art and I am pleased to be included. I have to say that my work looked great in their environment! Their emphasis is on natural, handmade objects, garden art, etc. I also really appreciated the enthusiasm that the owners expressed about my paintings, my palette and especially about the still life/bottle themed paintings I have been working on lately. They really liked the two that I brought them (see above).

And while I don't have any more solo shows scheduled for the rest of this year, I do have several group shows coming up, in addition to quite a few events that will feature The Painter's Farm products, many of which feature small format paintings. I will be updating things soon, in between studio time and shoveling dirt......
Posted by Tracy Helgeson at 1:21 PM 4 comments:

My Very Own Escape Artist 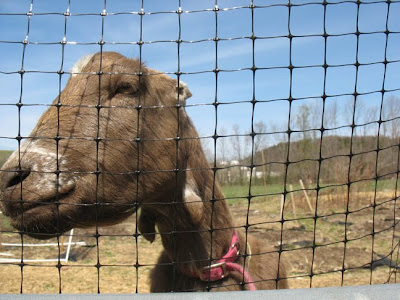 I think I might have to change Kodiak's name to Houdini.

Despite working to dismantle the fence all winter, she has made some amazing progress on it in the last few days; she broke out on Monday and came down to the patio door to say hi to us. This event led to both Doug and I losing a good portion of our workday to fixing the situation. Doug went up to the garden, which is where Kodiak and JB (the wether) have been housed all winter. The garden fence is sort of patched together, it is a combination of very old rusty and bent wire fence, topped off with a plastic deer fence that we added to keep the deer out last summer. Then we determined that she tried extra hard to get out because despite the fact that I had given them plenty of hay that morning, there was NO hay in their feeder and since they were so obviously starving, Kodiak decided to go find food so clearly this was all my fault.

Anyway, while Doug patched together the fencing (again) I put Kodiak on a leash and walked around with her a bit. At one point she was in the house with me while I answered the phone. Then I decided to try out the milk stand that Doug built and check her hooves. I knew her front hooves needed some attention but I was shocked by how bad the back ones looked. After trying out quite a few different positions, most of which caused both of us some pain, I managed to do an ok job of getting them trimmed, despite being convinced that she also had foot rot (she doesn't; I was in a melodramatic mood). I probably have to work on the back ones a bit more but will wait to do that for another week, we both need a rest I think!

Doug and I both figured he had closed up all the soft spots in the fence but today, while I was out this afternoon for a few hours, Kodiak got out of the garden not just once but 4 times! Poor Doug! He had to catch her, get her back up to the garden, figure out where she got out, then try to fix the spot. Each time Kodiak escaped she went in a different direction; first down to the patio, another time she went to visit the bee hives, then it was off to the secret garden. Most notable however, was her visit to the chicken coop which is just off the patio. She went into their yard through the human door (it was open, the chickens were out having a party in my flower garden free ranging) 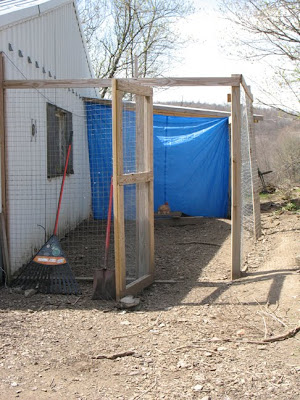 then went into the henhouse THROUGH THE CHICKEN DOOR. 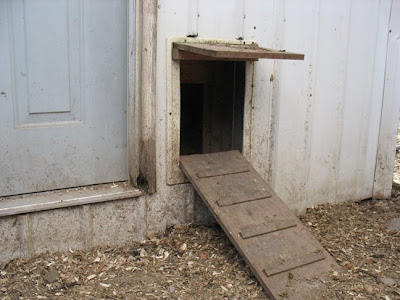 You can't even make this up, people! The chicken door is 14" high by 10" wide and I know this because I went out and measured it when I got home and Doug told me the story. 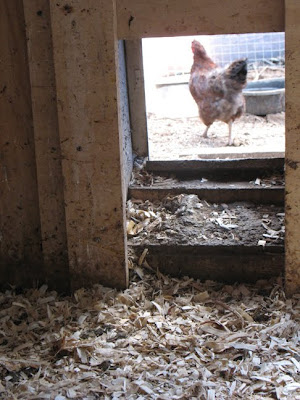 I can't even imagine how she did it, but Doug got there just as the hens that had been inside were fleeing out squawking and flapping their wings and found her standing innocently inside the coop. I am almost sorry I missed that scene.......

We REALLY need to get the fence up around their new home now and move them to their new home. I have also decided that we are definitely adding a few hot lines there, I have been on the fence about that recently because I didn't think they could get out.

These goats are turning me into a cynic.
Posted by Tracy Helgeson at 4:44 PM 44 comments:

Well, The Painter's Farm is really coming along here. It is now an LLC, there are tax ID numbers, a shitload of paperwork going on and don't even talk to me about taxes, exemptions, deductions and agricultural licensing procedures, yikes! Besides all that busyness, spring is springing and there is a ton of stuff to do. The new goat barn arrived a few weeks ago. I was incredibly impressed with how smoothly the Amish fellows put it into place, they had a really cool shed delivery trailer thing, even I had to admire it! 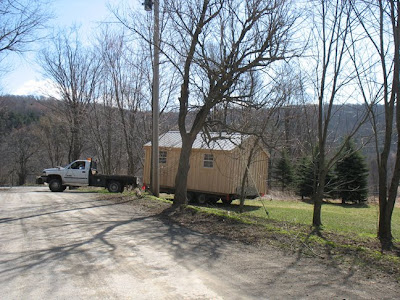 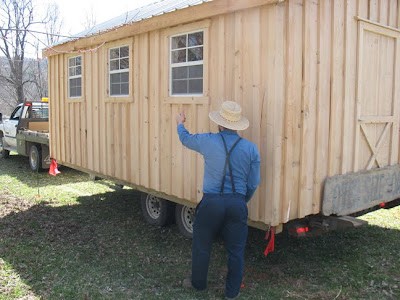 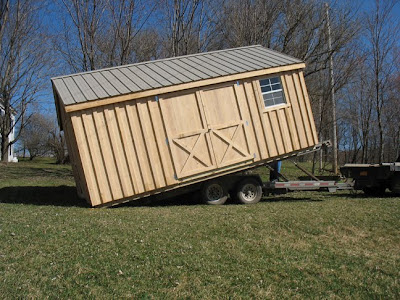 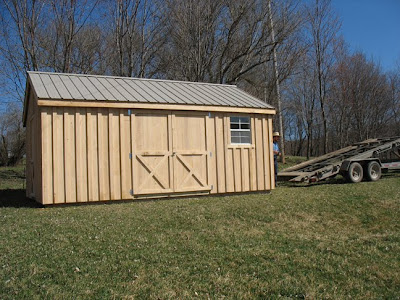 We initially planned to put it further down into the pasture but decided it would be too difficult for this girly girl to get down there in the winter. So we put it closer to the road and just across the road from our house, next to the hen's retirement home: 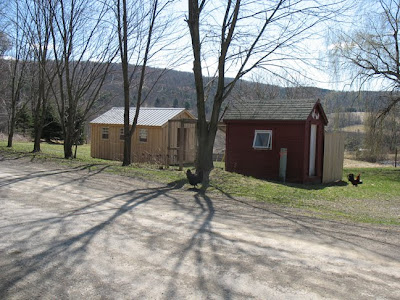 Looking up towards the house: 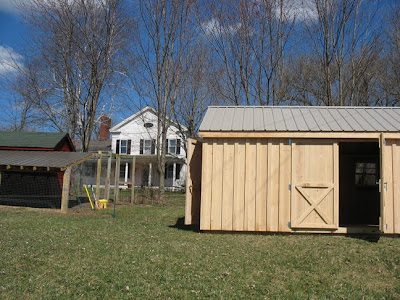 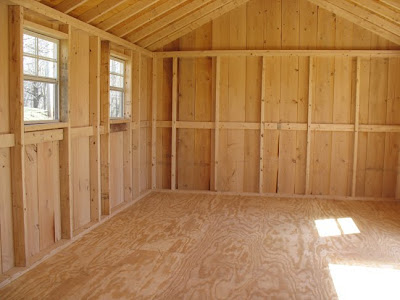 The goats will have a GREAT view: 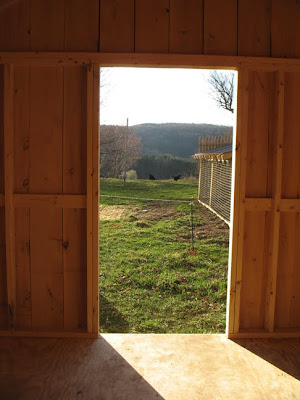 and in their front yard there is an old silo foundation with a tree next to it for them to decimate, which they will be VERY happy about. I suspect there will be a lot of 'King of the Hill' games here: 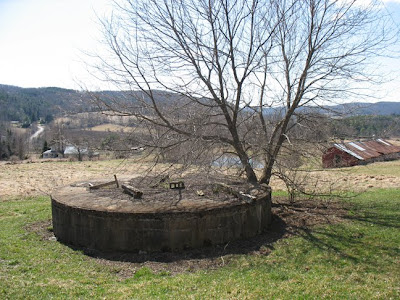 In the meantime we are slowly working on the fence and I do mean slowly. I spent several days measuring out the new pasture until my life was made infinitely better after I purchased a measuring thingy that you push along on the ground as you walk. Once I got that baby, I finished up all the post placements in one afternoon!! Then a guy (neighbor/farmer/handyman) came and put the posts in, he pushed them down into the grown with a front loader. It seemed strange but hey, it worked. Doug was out of town for all that fun, but since he returned he has been adding the posts that need to be set in concrete; corner posts and gate posts. Oh and a few of them needed new holes which he is hand digging in between his day job and sleep. Also, he has to work around an old barn foundation that seems to be located just a few inches down everywhere that we want to put in a post. Anyway, I think we he will be working on attaching the wire fence this week, the neighbor/farmer/handyman guy is going to help with that, while I supervise. heh. But this is where we are today: 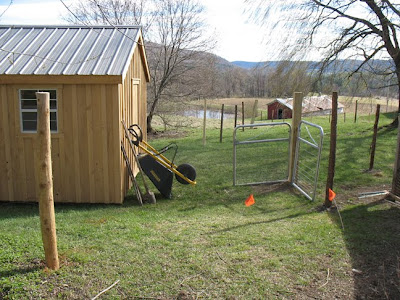 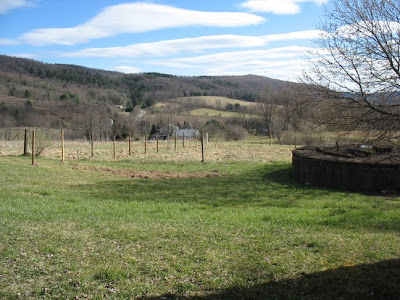 Oh and I have to get back into the studio to start some new work this week. Can you believe that a gallery contacted me that is actually interested in both my paintings AND The Painter's Farm honey/soap products????? What are the odds of that???? Will update on that when things get official.... PS. Gratuitous cute photo of Stevienicks who managed to get caught with a bucket around her middle and then me saving her while everyone else "helped" me. 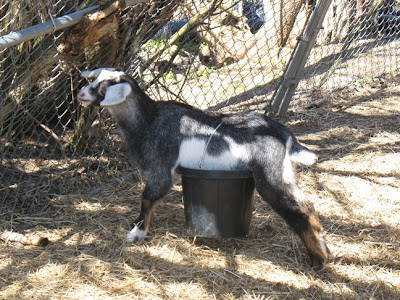 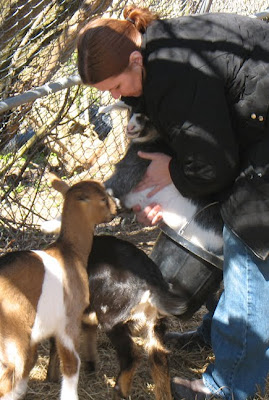