Ashes, Ashes, We All Fall Down

Last winter I noticed this on our property: 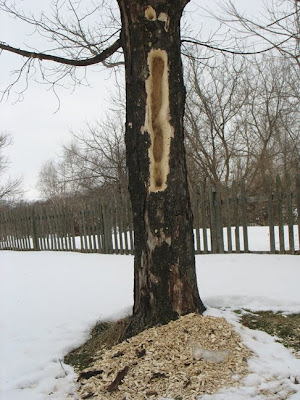 Then I got a pretty good shot of a beautiful Pileated Woodpecker who was getting busy with an ash tree in our front yard: 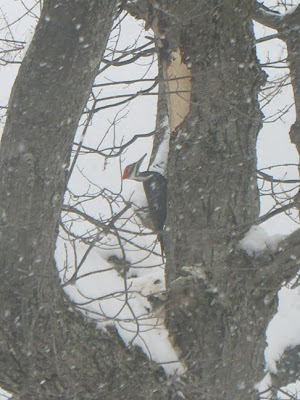 He made several holes in the center of the tree, and then a bunch more after I took this photo: 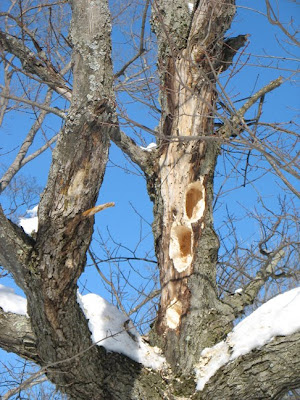 After he finished completely gutting the tree, I guess he moved along because we haven't seen (or heard) him again. Maybe he decided to check out a few trees in the hundreds of acres of wooded land just down the road. heh.

As visually captivating as these holes are, they have unfortunate consequences for us. We had a rocking thunderstorm last night and woke up to this: 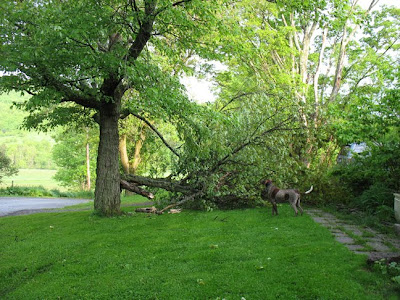 (Penny is also surveying the damage.)

The center part of the tree that the woodpecker had been so diligently pecking at came down in the storm. Luckily it didn't hit the house, or the cars, or even the potted flowers I had set down along the sidewalk yesterday, so I am not complaining. We'll chop up the fallen branch and add it to our firewood pile; but between losing its main artery and the ash borer that is infecting trees in NY State, I suppose the rest of the tree will have to come down soon.

We try not to micromanage our surroundings too much up here (with the exception of the dang weeds in the vegetable garden) so even though I will miss this lovely tree that shades our yard and house, I might also enjoy having the extra sunshine for my flower garden at the front of the house. Until then though, we will have a rather goofy looking tree in the yard. 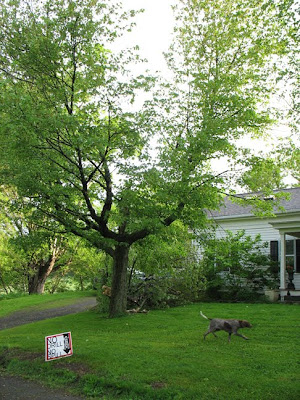 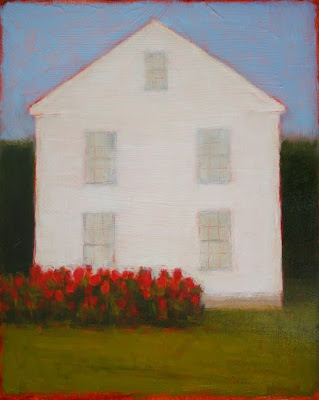 After frittering away quite a lot of days lately I am finally getting down to business but omg, why must I always procrastinate???? SO much work to do in the garden, which can't really be put off, and also I have a number of exhibits to prepare for in the coming months. Mostly a few group shows but they all involve me having to develop some new (for me) subject matter so some extra time and energy will be necessary.

However, one event that is coming up will need even more that that. One of the first places I showed my landscapes years ago was at a local nonprofit gallery, The Smithy-Pioneer Gallery. I have been included in their member group shows each summer (it's a seasonal gallery), have had a solo show and they can also take credit for getting my name listed in the Art in America's Annual Guide which I admit to being totally giddy about.

A few months ago, the new director contacted me and asked if I would like to be part of an exhibition called "Rural" that will be up during the month of August. I said yes, even though my exhibition schedule for 2011 was already getting a bit hectic and even though I usually try not to participate in anything bigger than a group show in August and September. I have learned from experience that it is really difficult to prepare for anything big while the kids are home during the summer, however, lately it is seeming like a bad idea to turn down any good opportunities. But I also paused when I heard who else would be exhibiting simultaneously.

But let me back up a bit first. The Smithy is the oldest building in Cooperstown. It has three floors, each with varying kinds of gallery space. The first floor is at street level and is the original part of the building, it's very rustic; stone walls, forges, anvils, and tools remain from its original use as a blacksmith shop. The second floor is where the member group show is held each summer, in addition to a small room that features a solo show each month. I had a solo there in the summer of 2008. And the third floor is a large open space, which usually features one or two artists and often has a particular theme, often historical. This is the space I will be sharing with Nancy Samstein. The member group show and solo show by Michael Whaling will be on the second floor and Wolf Kahn will be showing on the first floor.

Yes. You read that right.

THE Wolf Kahn. Monotypes, and maybe a few oil paintings. This is all exciting and everything but I must admit to being a bit intimidated as well. Over the years, people have often told me that my work reminds them of Wolf Kahn's and while flattering, I have never been quite comfortable with that, especially since I wasn't really aware of his work when I began my whole landscape/barn/color thing in 2003. (I wrote about that here and also wrote about meeting him" last year.) However, I feel now that even though our subject matter is still similar, the point of where my work has crisscrossed with his has passed. I was still concerned about being in such close proximity though and also about inundating viewers with barns and fields and tree lines, and I considered fast tracking a vegetable series I have going (more about that another time) so I could show those instead. But Doug assured me that my work has shifted away from his and it is true, I see that and I also hear FAR less feedback lately that includes his name in it;) So I am going to do some new work for this show, pursue the darker palette I have been using lately and also include more head on barn imagery like House, shown above, instead of the more angled views of structures I usually do. I think these are just a few of the shifts in my work that have distanced mine from his. Phew;)

So mostly I am pretty excited about this, but I still plan to stress a bit as well, which will ensure that things will be fine. Right?

PS. No word on whether Mr. Kahn will actually be at the opening reception. Please do NOT get me started on how much I will be stressing about that if he does attend. Heh.

PPS. I just realized that I really should have added here that I LOVE Wolf Kahn's work. It took awhile but I was finally able to see his oil paintings in person and they were simply stunning, so much better than any of the reproductions. I guess that is another reason why having my work in the vicinity of his is intimidating to me, I can't compete!!!!!
Posted by Tracy Helgeson at 1:46 PM 17 comments: 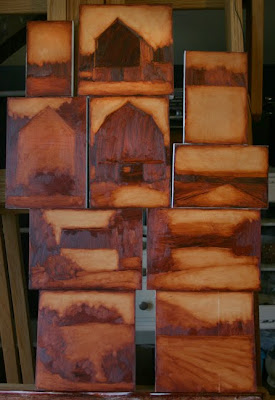 I have quite a bit of work that I should be doing, including several shows to prepare for, yet I am having quite a lot of trouble getting uninterrupted time in the studio. I blame the kids for this although it's possible that the magnetic pull from the computer screen has something to do with is as well. But mostly I blame the kids. Seriously. I can't believe I ever thought life was hectic when they were babies! Even though they are off to school during the day and supposedly that's my studio time, lately their needs are taking over that time as well, what with meetings, sewing things, dropping stuff off somewhere, laundry and picking stuff up all. the. time. It seems endless.

I used to be disciplined enough to just sit down and work in whatever time was available, but I have lost that. Partly because my studio is in the attic now, and not downstairs in the middle of everything like it used to be, which had its own problems. But mostly I think it's because my work and career have been in so much flux in the last few years. My excitement for working in the studio has changed; and it has taken me some time to see that it's not gone, it's just different. I have been letting that change throw me off but lately I am trying to work with it rather than trying to force myself to have the same intensity that I had years ago. Things are different now. I am different now. After many long discussions with Doug, I have come to see that despite all these changes in my work habits (which I have considered to be laziness and procrastination) my work has continued to grow and evolve. It's also more consistent; I make far, FAR less paintings for the sand down pile. So I need to accept these shifts and give myself permission to change without flipping out about it all the time. heh.

Anyway, it took me an embarrassingly long time to get around to starting this batch of small format paintings, but I finally managed it yesterday. The second I started moving the paint around I was in love with making art again so everything is right even if everything is different.
Posted by Tracy Helgeson at 10:33 AM 7 comments: