My son wrote down all 62 names (ten more than last year's giveaway!!) on a piece of paper, I cut them all out and here they are waiting for princess to sweep into the room and choose one;) 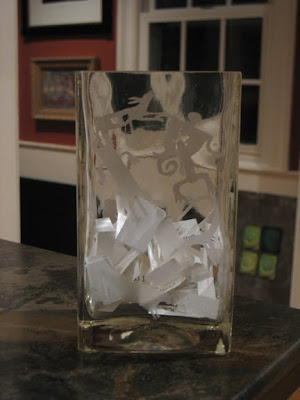 Ginger knows after a few years of all this contest stuff to look away while choosing the name. However she is looking FAR less perky than she dids last year. Maybe it was the 87 miles that she did at swim practice after school today. 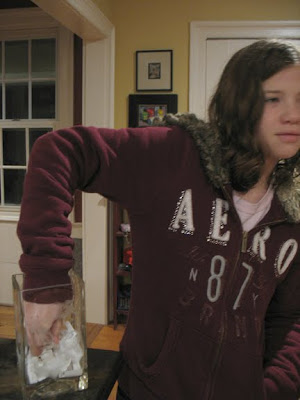 But she gets to gets to read it first anyway. 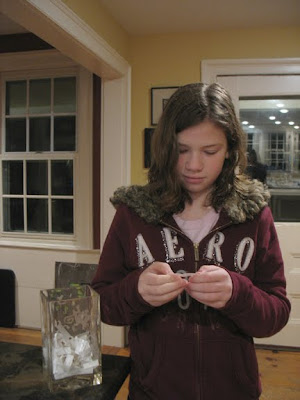 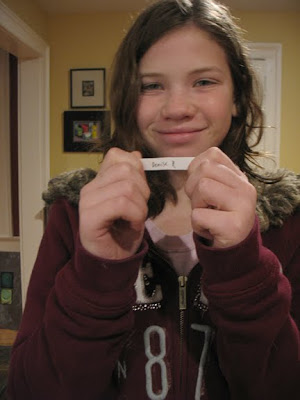 Denise has been reading my inconsistent blog posts for about a year and a half and is a regular commenter. I see this is her second try for my birthday gift giveaway. So keep trying, folks!!!!!

Email me Denise, so that we can make arrangements and also I would love to post a link here if you have one.

And again, wow! Thanks so much for all the birthday wishes and incredibly kind comments. I admit to tearing up when I read through all of them and that usually only happens when the cute little Amish boy rings the bell near the end of Witness and all the neighbors come to help without fear for themselves. That gets me every time.......
Posted by Tracy Helgeson at 7:15 PM 11 comments:

Hi everyone! Just wanted to let all you lovely happy birthday wishers know that I will have to announce the winner of the drawing later on tonight. I forgot that my assistant/daughter has swim practice tonight and won't be home until 6pm at least and then she MUST have her dinner.....

We will do the drawing later and I will try to post the winner's name right away, although it might have to be tomorrow if there is too much teen and tween drama this evening. heh.
Posted by Tracy Helgeson at 1:03 PM 4 comments: 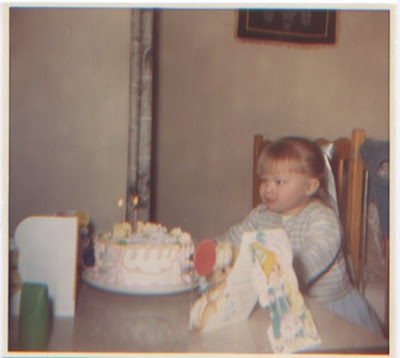 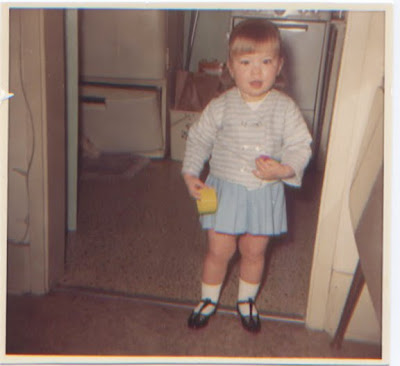 Several years ago when my mom was moving she gave me some boxes of things she had saved from my childhood. This was the first hint to me that she was such a pack rat, which was confirmed after she died a few years ago; the crazy stuff she still had? Yikes! For some reason I had never noticed that she saved EVERY.SINGLE.THING.EVER. Maybe because we moved nearly every year while I was a child and somehow it didn't seem like we had very much. Anyway, in one of the boxes she gave me, I found the entire outfit (including the birthday cards that are on the table, but NOT the cake, thankfully!) that I am wearing in the above photographs. And by entire, I mean ENTIRE; the shirt, the jacket/sweater thingy, the skirt, a slip, underwear (I was potty trained already? wow!), those same socks, shoes and even the blue hair ribbon which was attached to the bobby pin which still held a few strands of my hair. Possibly slightly creepy, but mostly very sweet. My mom was an unwed mother in a time when society was very different and even though things changed and became more difficult as I got older, she was at her best as a mother while I was very young. She made most of my clothes (including the whole outfit I am wearing in these photos), she was very creative and despite having little to no money, few friends and family, she always managed to put together a good day for me. Although I think this was probably the birthday that was the most fully documented, heh.

Time for my 3rd annual birthday gift giveaway. I am not as crabby as I have been in the past (and if you read that post, check out the link for the previous birthday post, still my fave) so this time I am including those of you who live in Canada. I am continuing to draw the line at shipping overseas (sorry) but if you have an address in North America that I can ship to, please wish me a happy birthday here in the comment section of the blog which will make me feel terribly popular and like I haven't lost most of my readers due to spotty postings. My super enthusiastic daughter, Ginger, has agreed to draw the name again and I'll announce the name tomorrow. My birthday gift is the choice of a painting from my sales blog and if there is not currently a painting that speaks to the winner, the choice can be made at a later date. I want the winner to get a painting that they reallyreallyreally want.

Y'all have until midnight tonight. GO!
Posted by Tracy Helgeson at 9:44 AM 67 comments: