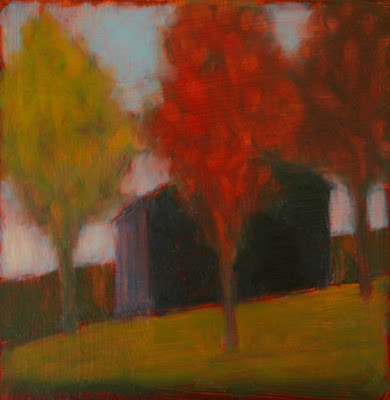 Last Friday I was cruising around on the internet looking for galleries and museums that really need to be learning all about moi and my fab work soon. Heh. I was checking out The Brattleboro Museum's website and noticed that they were hosting a lecture by Wolf Kahn. Now, I have a long and checkered past with Mr. Kahn (I wrote about that here and here) and have always been interested in meeting him, even if I am not always very happy about my work being compared to his so often. Anyway, since the lecture was the next day and my schedule was relatively clear, I took that as a sign that I should go. No babysitters available so I decided to take my son, Julien, who is probably headed towards art school in a few years. An added plus about that was that he actually knows who Wolf Kahn is and what kind of work he does, so he was excited about going as well.

After deciding in advance about the VERY IMPORTANT issues (we settled on playing my iPod on the way there, and his on the way back) we had a nice drive to Vermont on a beautiful day. I had kind of hoped we could stay overnight cause Tracy's night vision isn't exactly stellar these days, but I had been unable to find anything before we left. Found out why when we got to Brattleboro; turns out that nearly everybody in New England was actually in Vermont for the weekend, looking at leaves and clogging the roads for me. So I mentally prepared myself for another three and a half hour drive back, bleh.

Despite being crowded, Brattleboro was great. We had a few hours to pass until the lecture, so we walked around and went into a few stores. There was an excellent record store where we bought a few gifts for Doug's birthday, including two Bob Dylan albums that we had never heard of and a Grateful Dead album where all the band members are dressed suspiciously like the Bee Gees on the cover.

We had an excellent dinner here and got to the lecture early enough to get front row seats. The lecture was held in a packed, small and dark theater but after an introduction by the Museum's director, Mr. Kahn got up and stood at the podium under a spotlight. The topic of the lecture was "Can Art be Taught" and right away he joked about how he had written a rather formal presentation and would now rather just tell a bunch of stories, which is exactly what he did starting with two of his teachers: Stuart Davis and Hans Hoffman, who had very different styles in the classroom. Stuart Davis talked mostly about jazz music and baseball, he had very little passion for teaching. Hans Hoffman spoke of a lot of things that no one understood and in fact he told his students that they wouldn't understand what he was even talking about for at least 5 years. He also had a tendency to draw into his student's drawings if he felt it needed correction and was even known to cut up the drawing if he felt it should have a different angle to it. He did ask before he went into a student's painting however, so that was good;)

Other highlights from the talk:

-He greatly dislikes the work of Jeff Koons and Gerhard Richter (I am repeating this only because this the talk was being videotaped and well, he did say this out loud in front of many people, so hardly a secret).

-This led to a discussion of the differences between artists and art students, that most are amateurs and others have a calling to make art, and how teachers are doing a disservice to them if they don't understand the differences in their students. He also thought though, that art is worth doing if it is something one enjoys and if one gets a little bit better each time, even if one is probably not going to a be really successful and famous artist. (phew!super glad to hear that!)

-He discussed his experiences as a teacher in the 60's and 70's and the various politics involved with that, then he went on to describe how in every class there were maybe 4 hotshots, 15 mediocrities and 10 who shouldn't be there at all. This didn't sound so harsh when he said it and anyway, based on my years in art college, I don't think it is entirely inaccurate. Guess which category that I think I belonged to?????

-He described the exercises that he had his workshop students do. I thought they all sounded interesting even though I would probably be a pretty crabby student and complain about starting off with making a gray scale. ha. However, he was redeemed in my opinion by using the term "shot their wad" while describing the next exercise. It was the perfect term. Really, it was.

And I was able to decipher a few more more advice related tidbits from my mostly illegibly scribbled notes:

-He talked about how his macular degeneration has led him to be less fussy about the details and that he has to now pay more attention to the big picture.

-He joked that as his worked has changed due to his eyesight he has been getting much better reviews and wondered if he would have to be blind in order to be considered a genius!

-He said he knows his work is too nice and maybe even sweet, but that you have to work with the emotion that you have. He said his friend Joan Mitchell had a lot of anger and it really showed in her art and worked well for her.

Mr. Kahn was VERY funny, a very appealing mix of self-deprecating humor and self confidence too. While some of the things I have written here might sound a bit harsh in print, hearing him say them was quite different. His discussion of his teachers, of the art he dislikes, how crazy teens are; it was all delivered in a very endearing manner.

Anyway, he answered a few questions after the talk, then sat down at a table in the lobby and signed books etc, while I kicked myself for not bringing my own book of his to have him sign. I bought two show catalogs and he signed one for me and one for Julien. I was able to chat with him for a few minutes and naturally I made a few dumb jokes and only babbled a little, so that was good. Relatively speaking anyway. Heh. My son really enjoyed the lecture and I think he still planning to apply to Cooper Union after all that.

And except for the idiot who insisted on tailgating me while I was driving in the pitch dark, on a winding road with little to no shoulder, at 6o mph (slightly OVER the speed limit, I would like to point out) with his brights on, the drive home was rather uneventful, even if I do not understand what the heck so many drivers were doing driving around on the highways near Albany at midnight, but whatever. Leaning towards country bumpkin here, I guess.

Well, a country bumpkin who got to meet Wolf Kahn, ha!

PS. No image of Wolf Kahn's work because I don't know how to do a screen grab and no pictures of the event because neither one of us remembered to take any photographs. You'll just have to settle for one of MY barns, hehe.
Posted by Tracy Helgeson at 4:27 PM 22 comments: 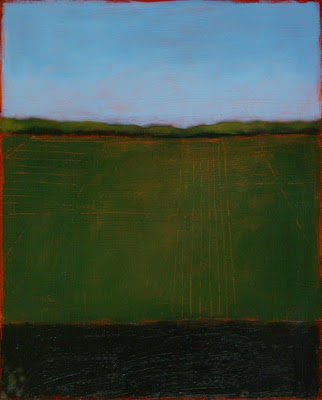 So I have done little to nothing in the last few weeks while "recovering" from preparing for two almost back to back events. I haven't really caught up on house and yard stuff, although I have done the basics. Mostly I have been working on my taxes, cleaning up my studio and packing and shipping out small paintings. Have had quite a good run on sales lately!

But I am trying reallyreally hard to NOT waste all this time, this time. I was incredibly unproductive during my last slow period between shows and I don't particularly like how I feel about myself when I allow that to happen. I just get so overwhelmed by how much I WANT to do, that I can't do anything. Dislike!

I literally do not have anything on my schedule until next April. As much as I think I would like to keep all this free time to do whatever I want, the reality is that I really need structure and deadlines in order to stay productive. Things do often just come up at the last minute, but it's crazy to be depending on that happening so what I need to do first is to send out my info, applying for competitions, etc.

And as far as actual painting goes, um cause that is what I do, right now I am leaning towards focusing on the 'People You Know' series again and trying to get them to work better in a smaller format, like 8"x10". But first I must actually get some more 8x10 panels....

Until I get those (must order them today), I think I will work on the squares that I have left over from this project that I began at the Vermont Studio Center last winter.

Starting on those tomorrow. Heh.
Posted by Tracy Helgeson at 12:57 PM 2 comments: 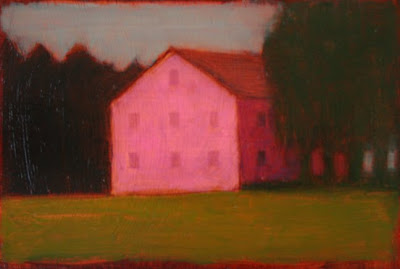 So today I am (supposedly) going to finish up putting together all my deductions for 2009 so that I can send it all off to the accountant. Yes, Doug and I are somewhat lame in that we never get our taxes done in April, October is our April. In Doug's defense, his side of things is somewhat complicated and it is a real challenge to get it all together by April. I don't really have a defense for myself; there about 10 ways that I could do a better job of compiling my info throughout the year so that on January one, viola! It is all ready to go! However, I admit to being a complete and total procrastinator in general and particularly when it comes to anything tax related. We are doing pretty good this year however, our accountant will have 9 whole business days to put together our return which is about 6 more than we usually give him. heh.

And since taxes and all tax related talk is right up there with fingernails scratching a blackboard, I will end this very brief post with something silly and happy. Like twitter, what could be happier than twitter???? ha. Last night during some crazy tax induced haze, I opened a twitter account, which is pretty much how I ended up on Facebook too. I do not need any more reasons WHATSOEVER to be sitting on my behind in front of the computer but well, now I have one another one anyway. Still not entirely sure what I am doing there nor do I understand the etiquette yet (am I supposed to follow everyone who follows me? is it rude to block people/organizations who follow me and are clearly trying to get me to open bad bad links? and how the heck does this work with my blog and facebook pages? isn't everyone going to be super sick of me between all these things? I don't think I have enough interesting things to talk about!) but since I might possibly qualify as an attention ho, I may as well go with the flow so if you are also a twitterer maybe you'll see fit to follow me.

PS. The above painting is available, along with a bunch of other new ones, at my sales blog.
Posted by Tracy Helgeson at 9:39 AM 2 comments: