Drowning in a Sea of Cuteness 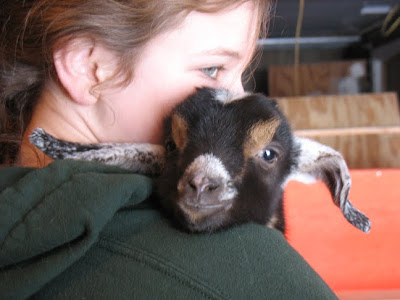 Turns out the best way for me to avoid post show meltdowns, is to pick up 3 unbearably cute baby goats on the morning after the opening reception.

But let me back up here. A few years ago I met Brent, one half of The Fabulous Beekman Boys and he said that when I was ready to take the plunge and raise goats, I could buy a few from them in the spring when their goats have their babies (they don't keep all the kids, many go to auction and some are sold to various people in the area). It took me awhile to get it together but last fall when I impulsively decided to get 2 goats from another friend of mine, I knew that I would also have to get a few from the Beekman farm too, just to round things out.

So I have been in contact with John, who is the actual goat guy and he let me know that he would have kids that would be ready to go at the beginning of March. Doug and I went out to the farm to meet John and see the goats. We also met Polka Spot, the diva llama. She had been outside but came in when she heard us, the crowd of goats parted like the Red Sea when she breezed into the barn, and I am not even joking! She seemed to like me; she didn't spit or hiss at me and even let me rub her neck. She definitely had an attitude though. Anyway, a few weeks later, after there were even more kids to choose from, my daughter Ginger and I went back out to the farm. I had decided to get 2 doelings. We each picked one (VERY difficult, have I said how freaking cute baby goats are????) and I arranged to pick them up on the weekend that my show would be opening. 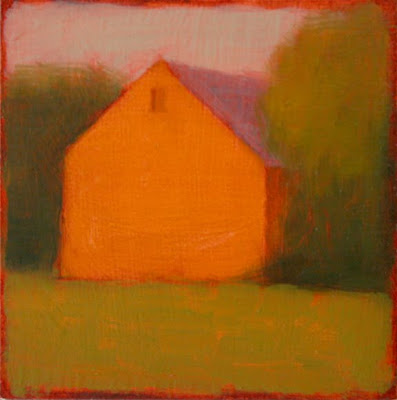 The gallery opening was wonderful and Doug and I really enjoyed ourselves. The small format paintings proved to be a good choice for this show; quite a few had already sold by the time we arrived and those who attended the opening seemed to enjoy putting together small groupings of them. Several collectors were also there and it was really nice to talk with them. It was a good night! 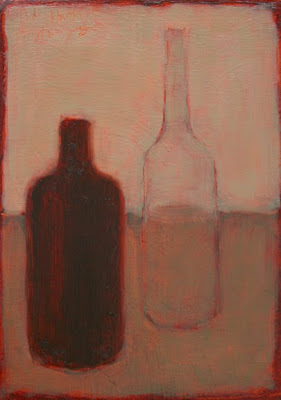 After doing the chores bright and early the next morning, I went on out to the Beekman farm (it's about 40 minutes away) to pick up the goats. While I was there I impulsively decided to get a buckling (who would eventually be castrated) as a companion to JB when I separate the pregnant girls from the boys next winter. Thinking ahead in the face of all that goat-y cuteness is tough but I managed! And that's how we got Jonbonjovi: 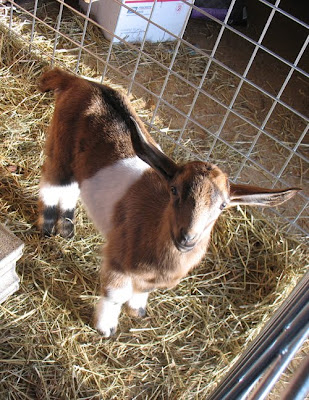 I named them (from left) Stevienicks, Jonbonjovi and Gildaradner. MY kids don't appreciate my concept here with the names but I think it's funny and strangely enough the names fit their personalities. 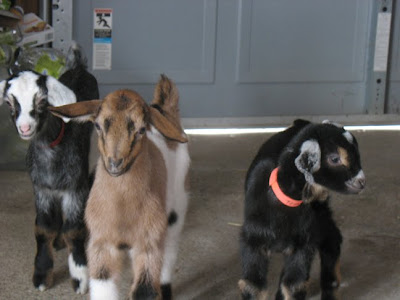 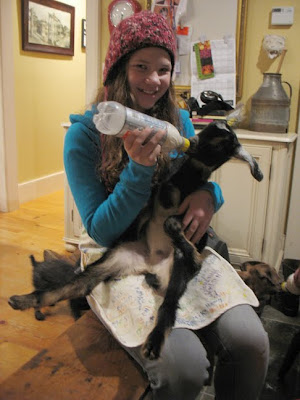 The last week has passed in a busy, but pleasant blur of goat feedings, watching them play, soapmaking, cleaning the house, and worrying about the nighttime temps. Doug built a wood house and and small pen for the goats inside our garage, which is just basically a tin building and everything inside of it freezes in the winter. Although we have had a very mild winter, the first few nights that we had the kids it got down to about 8 degrees. But they managed just fine with their heat lamp, a few blankets draped over the house and some extra hay bedding, so I forced myself to leave them be after a few nights of checking on them at 2am. We did bring them inside for their feedings though for the first week or so, mostly because WE didn't want to sit in the freezing cold to feed them; they LOVE being in the house! Luckily, Mr. Wilson is turning out to be a good herd dog, he keeps everyone moving when they come in and out. He also pays close attention to feeding time. We may have to change his name to "Sheriff". You can see him here doing his circus trick; we did NOT teach him that btw. 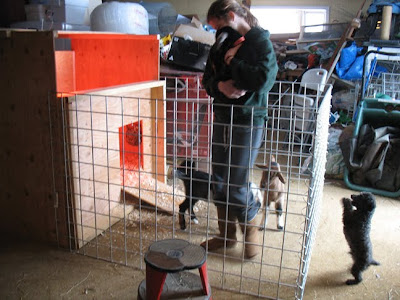 Now that it is MUCH warmer, we have been feeding them through the fence of their pen in the garage. Gildaradner prefers to sit in someone's lap while having her bottle, but turns out she is not really married to that quirk when she is really hungry, heh. 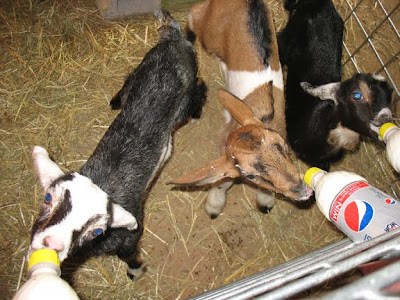 Yesterday I took Gildaradner and Stevienicks to the vet to get their horn buds removed. Jonbonjovi is a polled goat, which means he won't get horns. He stayed home and cried all day. Literally. Most goat farmers do the disbudding themselves (good blog post here about the procedure) and I am fairly certain that I won't be able to manage to do this although I am not saying never, I guess. Never thought I would raising goats either and here we are. Anyway, the vets use anesthesia so the goats were just fine when I picked them up, however I wish I had googled some images beforehand. I admit to being fairly freaked out when I first saw their little heads! And forget about the rest of the family; Ginger and Doug flat out refused to help me feed them because they can't look at their heads, so I have figured out how to bottlefeed all three myself. Already they are looking better today and anyway, they are both still the same silly and adorable goats so I barely even notice it now. Scroll past quickly if you have delicate sensibilities, but this is how they look today, which is far better than yesterday: 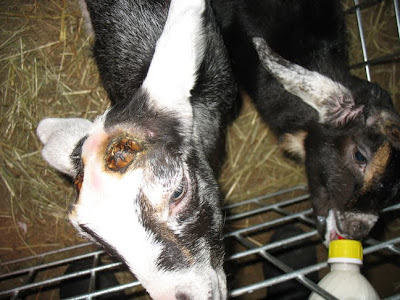 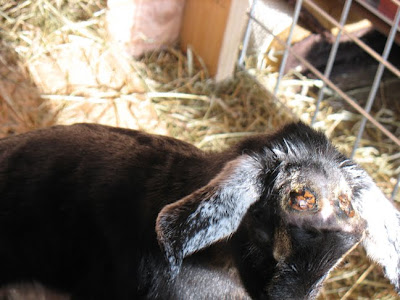 All this has kept far too busy to have any sort of meltdown concerning art, and the break from painting has been lovely, but I do have to get back to the studio soon. Provided I can tear myself away from all this cuteness! 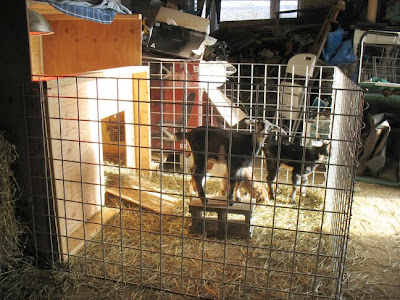 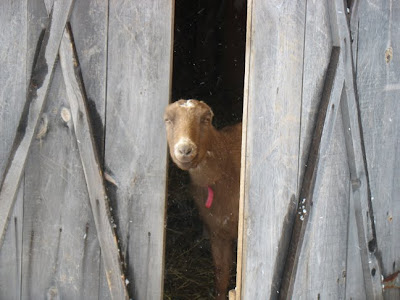 So less than 24 hours after I mentioned here that my dairy goat Kodiak was hopefully with child, I found her with stuff coming out of her bottom. The placenta, to be precise, and a variety of other things came out of her for several days after, which was pretty freaky and kind of fascinating too. I knew when I decided to have goats that I would be seeing some amazing things, but somehow I didn't think 'goat fetus' would be one of them, at least not so soon! Anyway, it was a week of sadness, mixed with gladness that Kodiak was ok and actually seemed to be feeling much better and perkier than she had before this happened. It was suggested that I give her antibiotics to prevent her from developing an infection, but I decided to load her up with Colloidal Silver and Vitamin C. We rarely take antibiotics and even though I didn't totally rule out the option for Kodiak, I wanted to try the natural remedies first. I have been watching her closely and have not seen one single sign of infection, stuff has stopped coming out of her and she is doing great. She and JB jump around and frolic a lot, which is hilarious! As far as the cause of the miscarriage goes, I stressed for awhile that I might be a bad goat momma, but after doing a lot of reading and talking with my goat gurus, I felt better. None of the usual reasons for goats miscarrying seemed to apply here and we all decided it was probably just not a viable pregnancy. So I think I can go on with the goatkeeping.....

I WAS planning to start making soap with the goat milk, however, and so I have had to change my plans there. And actually I was only able to ponder any of that for about a day, because all of a sudden my solo show deadline was upon me and I had to switch into high gear in the studio. I managed to do over 90 small paintings (90 are in the show; a few didn't make the cut;)) for the show. I would have liked to have been closer to my goal of 130 but, well, there WAS a miscarriage here. Yes, I am not above using my goat's miscarriage as an excuse. heh. Anyway, I also did three new larger paintings and then there was the documenting, and photographing and editing of all those paintings, oy!

Anyway, everything is done now and instead of delivering the work to the gallery today as planned, I have to do it tomorrow as we are in the midst of our one and only snowstorm of the season. Naturally.

Please visit the gallery's website for a show preview and Doug and I will be attending the opening reception on Saturday. Come by if you are in the area!
Posted by Tracy Helgeson at 3:49 PM 4 comments: