Christmas, Then and Now 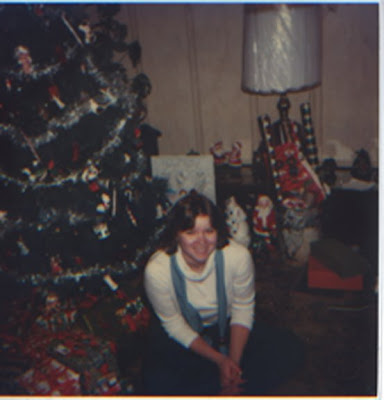 When I was in 7th and 8th grade, I lived with my best friend, and her mom and step dad in a trailer park mobile home community (the best one in town-it had it's own pool! inground, no less!). Tammy and I had been friends since 5th grade and I had spent a lot of time at her house. When my home life got bad it was easier to stay at Tammy's and slowly it became a permanent situation, at least for a few years.

Tammy's mom, Ginny was a crabby, smart alecky woman with a heart of gold. She usually had Tammy and I figured out pretty well, when we were up to something. However, I don't think she ever did find out that the gum on the couch cushion we got in huge trouble for, wasn't really gum. We felt lucky though that that was all she thought it was, because actually the cushion had begun to burn while we were burning paper and candy wrappers and that kind of stuff (we were experimenting, did you know that plastic candy wrappers burn incredibly fast?) in a plastic ashtray that was sitting on the cushion (we were very smart too). We did manage to get the soot cleaned off the ceiling which may be why she never put the melted spot on the cushion and the loss of one of the ashtrays together.

By Christmas 1978, I felt like a part of the family. They were very generous with me, an interloper who had practically burned down their trailer the previous summer and by about a week before Christmas there were a lot of presents under the tree for both Tammy and I. Of course we were warned heartily to leave them alone and we did for awhile. At some point though, it all became too much for us and one evening when Tammy and I were home alone we very carefully opened all of our gifts. We didn't really unwrap them all the way, we just peeled the tape on one end, just enough so that we could see what was inside. This was still very dangerous though because Ginny had eyes like a hawk and would be able to see that the gifts had been tampered with from across the room. However, I was an expert at snooping (one of my lesser known talents) and making it look like I hadn't been there. After we jumped around, thrilled that we had gotten such great gifts, I very carefully taped all the packages back up. They looked perfect! We couldn't get them all back the way they had been stacked though and certainly she would notice that. I don't recall for sure but I imagine we concocted some sort of story probably involving Tammy's siamese cat, Cindy and how she had messed everything up while batting a cat toy around.

Ginny didn't suspect anything until Christmas morning when we were less than enthusiastic when we opened all of our gifts. The excitement had worn off and we just weren't that good at pretending. She wasn't exactly mad, but she sure didn't let us forget about it either!

Of course I immediately felt guilty, and soon, I realized how much fun and anticipation had been lost. And it was a few more years until I realized how disrespectful our sneakiness, had been towards Tammy's mom. She and her husband went to a lot of effort to buy us what we wanted, not to mention that they had to count every penny, and now that I am a parent, I understand how much of a let down it probably was for them to not be able to see how excited we really were about our gifts.

Because my favorite part is seeing how excited the kids are when they open a gift, I have avoided this particular situation with my own kids mostly by hiding everything until Christmas Eve, when I would spend almost all night wrapping them and putting them out just a few hours before they would wake up. They really haven't had the opportunity to sneak a look or slit open the ends of their gifts until this Christmas. We put out the gifts TWO days ago! I told this story (um, leaving out the part about burning stuff in an ashtray on the sofa) and explained that they weren't allowed to touch anything, that there was an "invisible fence" around the tree and that I would know if they breached it. Of course I wouldn't but like Ginny, I have made enough lucky guesses over the years that they do believe my story about the eyes in the back of my head. Well, my youngest daughter does anyway.

So this holiday was even more exciting than in the past even though we cut back drastically as far as gifts go. But that didn't matter, the kids were simply giddy with anticipation and spent much time excitedly guessing and discussing what their gifts were. We really threw a wrench in the works too, by not putting a name on the largest gift, Ginger pestered me relentlessly trying to get me to tell her whose it was OR what it was.

I imagine they will have to learn this lesson for themselves someday, but then again maybe they will just take my word for it and not do what I did. 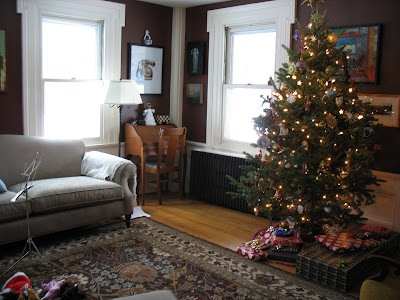 Oh and this is the first year since moving into this house that we have had the tree in a decent spot, a living room! Since this living room was always my studio, we always stuck the tree in a corner of the very small tv room and one year it was in the dining room. It's like we have a real house now....
Posted by Tracy Helgeson at 6:06 PM

Merry Christmas T and thanks for the story. :) Hope it is a good year ahead.

And what a great story about a family who made room for a girl who needed it. Sweet.

I love your eyes in the back of your head - looking back and now with 360 degrees of experience. Nice shout out to mischievious youth and tricks of the trade. Glad your kids take your word for it....no snooping. Very funny story and what a nice looking room with the lovely tree right where it is supposed to be.
Merry Christmas.... Nina

Thanks for sharing that story Tracy. I hope that you all had a great day yesterday and are still managing to chill out today :D. Hugs and all the best for 2009.
Keep on being the inspiration that you are!

Thanks Gary, I hope we all have a good year ahead!

Hi Meno! Hope you had a nice Christmas! Yes, they were very generous with me, I will always love them for that, even if things took a bit of a turn a few years later. Oops, another story for another day:)

Thanks, Shea, you too!

Nina, thanks, I hadn't really looked at it that way but I guess it's true! Well, I don't THINK my kids will snoop, but.....

Helen Suzanne, thanks and hope you had a nice holiday as well. I plan to take it pretty easy for the next week.

Merry Christmas! great story! my girls believe i have eyes in the back of my head too and that god tells me when they do something bad... wonder how long that will last?

Did you know that you can create short urls with Shortest and receive cash for every visitor to your shortened links.