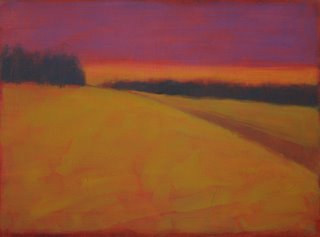 
Despite having to work extended hours every day this week in order to (by Friday) get 8 pieces finished for a group show, life goes on. Or rather doesn't. After getting back on Sunday, I have had to deal with pet death and livestock health issues. Unwillingly, I might add. Doug left at 6am on Monday morning to go to NYC for two days so I was left to handle things. Sunday afternoon we were in the chicken coop and my daughter pointed out that one of the chickens had a big lump on her chest. As I picked up the hen I then noticed that she was really docile (most of them aren't!), and also that she was noticeably smaller than the rest of the hens. Sure enough, she had what I thought was some kind of growth, but after doing some odd searches like, tumor chicken (got a lot of recipes for tumor chicken) and growth on chicken breast (much info about salmonella here), I finally found my way to a condition called pendulous crop" In case you know nothing about chickens, like me, food can get impacted in the crop, which is kind of a holding area for food until it moves down into the gizzard and the crop can fill up like crazy. There are a few things one can do to treat this so Monday morning I found myself holding a chicken upside down and massaging her chest in order to get her to basically throw up. A bit of disgusting stuff did come out and then I gave her a few syringes of mineral oil which is supposed to softened the contents up so that they will move along. By the way, you really haven't experienced life until you have struggled to get a syringe into a chicken's mouth. As soon as I can rig up an area for her I will separate her and feed her suggested foods such as yogurt and lettuce. But the chances are slim that I can treat this successfully and so she will probably die from malnutrition. None of the other birds have it though, so it seems to be an individual bird problem rather than a flock problem, which is good.

Then later in the morning, my son got up, checked on his hamster and found him to be almost dead, lying on his side and breathing sporadically. Despite Fluffy having a close call last winter, and even though Fluffy was over two years old, pretty old for a hamster, my son was very upset and spent most of the day crying and moping around the house. I, on the other hand, spent the day checking on Fluffy waiting for him to actually stop breathing and also kind of freaking out about the fact that since Doug was out of town, I was going to have to handle a dead hamster at some point. After much debate and again looking through the internet (did you know that there is a band called Half-Dead Hamster?) I decided to put Fluffy in a zip lock bag and keep him in the freezer until we could have a funeral. And since our son wanted to wait until Doug got home, we had to keep him there for two days. Actually, I was kind of vague when the kids asked where I put Fluffy after removing him from the cage, because when I had mentioned the freezer option they were a bit freaked out at the thought. Uh, as I was.

Even though I had to deal with the dead hamster body I was actually a bit relieved about his death. Two years ago when we had had Fluffy for a few months, he had infected eyes. After some debate about the ridiculousness of taking a $15 hamster for a $65 vet appointment we decided that we wanted to set a good caring and loving example for our son. Actually it just seemed kind of cruel to let him go blind even if it was just a stupid little hamster. So we took Fluffy in and the vet noticed that his teeth were really long and that because of that he was dehydrated (evidently hamsters can't drink when their teeth are too long). He clipped them and suggested some things that would encourage the hamster to chew, which we tried but Fluffy would just not chew! I took him in to get his teeth clipped once more and then the vet sold me a clipper so that we could do it ourselves. Great. At first Doug and I tried to clip the teeth. I would hold Fluffy and keep his little hands out the way and then Doug would do the clipping. But then Doug accidentally cut the hamster's lip and it started bleeding. We both freaked out and Doug couldn't handle doing it anymore. So for the last two years, every month, I have had to go in, hold Fluffy by the scruff of his neck, put the clippers in the right place making sure that the tongue wasn't in the way, close my eyes and squeeze the clippers. Doing this was amazingly stressful and I never got used to it. I would have butterflies before and would be all shaky for hours afterwards. A friend of ours suggested that this was the type of hamster you let go in a field outside or something, but I just couldn't bring myself to do something so intentional.

So last night we had a funeral. Our son had made a cement stepping stone with Fluffy's name on it, we all wrote messages on the cardboard paint stick box from R&F Paints that Fluffy's frozen little body fit perfectly into, we all said a few things about him and then buried him under an apple tree. I am happy that my son feels better after this closure and am also strangely comforted by the fact that we have a pet cemetery. 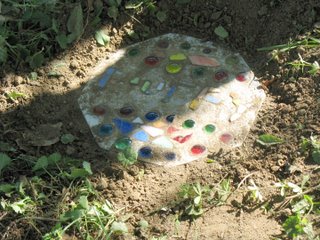 Posted by Tracy Helgeson at 9:48 AM

Oh yes, the hamster funeral. That's a nice head/stepping stone. Our headstone was made of cardboard and has melted away in the rain over the past few years.
There's something so sweet about kids and the pet funeral.

wow I never knew all that about hamsters... I was once roused from my bed and had to drive across town because my step-sister's pet hamster had gotten a string tied up too tight around its foot...I like guinea pis-- the long haired ones-- they look and sound like Sytar Trek's Tribbles hahaha. Sorry about your loss though. We just lost a pug a couple of weeks ago. I miss his snoring.

Meno-You are right abut it being sweet somehow. Our kids were really into and were very diligent about doing everything just right.

Terri, I have always sworn that I would not be the type to get all crazy treating animals medically, but here we are doing all kinds of wacky things. Was the hamster's foot ok?

Hi Tracy, thank you for saying hello in my blog. I must say I love your work. You have a very good sence of light and atmosphere, not many can work that way. Take care!

Thanks, Luis, for the compliment and for visiting me!

"Did you know there is a band called Half-Dead Hamster?" SO FUNNY!

yup my stepsisters at the time treated me like the pope after that LOL I was glad to do it. I cant stand to see animals or childeren suffer.

even though the hamster costs like $15 and a visit to the vet is like $65, its still worth it. thats cause a hamster is ur friend AND a living thing so it too deserves to get a doc appointment. i dunno bout u but i cant stand to see animals or people suffer.

it sounds like you gave him a good home and took good care of him though. :) I don't think I'd be able to clip my hamsters teeth, I'd be too nervous.