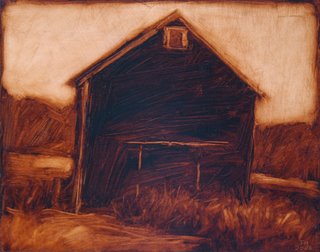 
We had a rather complicated schedule for the day of the opening at Salt Meadow. Doug took the boys fishing on a party boat from 8-noon. So I had the girls and since it was a rather rainy overcast day, we decided to hit the mall. We bought a few school clothes and then I made a big mistake. I went into a changing room to try on a pair of jeans at the Eddie Bauer. I don't know what I was thinking, because changing rooms always turn even the best day into a bad fat day for me, which is exactly what happened, despite my best efforts to snap out of it. Then that afternoon, we had plans to get together with some real life friends of ours, Pat and Carina. We decided to meet at the Cape Cod Potato Chip factory to take the tour with our kids and theirs (they are friends too) and afterwards go back to our place where all the kids would stay with another friend and her husband (also vacationing for the weekend) while the grown-ups went to the opening. I couldn't do the factory tour though, which was fine because after my bad fat day incident, I didn't exactly care to see how my favorite potato chips are made. I had to leave earlier for the opening, which was to start at 4pm and then Doug, Pat and Carina were planning to come later to the gallery.

Naturally the traffic was bad, so I arrived a bit after 4pm which kind of stressed me out, especially after having difficulties finding an outfit that I felt comfortable in, you know, because of the stupid bad fat day. Anyway, the gallery is in a beautiful building on Route 6a in East Sandwich. Previously, the downstairs was a glass studio for artist Gayle Olsson, but after she moved, gallery owners Glenn and Sharon turned it into more gallery space in order to have monthly solo exhibitions. I was very pleased when I arrived, because they had really done a great job of hanging my work. I enjoy seeing how others decide to display and group my paintings. It's always different, often better than what I would do and I really appreciate what another person can do with my work.

The first hour or so was kind of quiet. A few people were steadily coming in and I was able to talk to almost everyone. I had a chance during this time to look at my work and like it again. I probably shouldn't say this out loud as it seems negative, but really, I think it's fairly normal as it seems to happen fairly often. When I am preparing work for a rather large show, by the time I have to deliver or ship the work, I HATE it. I think it's awful, the worst I have ever done, no one will like it and I am so sick of it all. Then when I see the pieces hung, under the lights, all intense and colorful, I like them again and each one is my favorite painting. All is forgiven. Anyway, for awhile there was no one there and it occurred to me that my friends from home were going to show up soon and would see that the reception was pretty quiet. Great! Now people from home would think my "career" might just be a figment of my imagination. Luckily, at that point, one of my blog readers, Stephanie, (hi Stephanie, thanks for coming!) came in with a friend, and we talked for awhile. And then quickly the room filled up and it was actually pretty crowded by the time Doug, Pat and Carina showed up. Doug told me later that they had to park a good way down the road, because there were so many cars and the parking lot was full. So my reputation is safe, for now anyway. heh.

I talked to so many people and by the end my eyes felt buggy and I had started to babble a bit. I was pleased to meet many of the other artists that the gallery represents, including Melanie Chartier, David McDermott and Yukumi Matsumoto and Gayle. I had attended a meet the artist reception at Salt Meadow last fall and many of the same people returned, so it was nice to see familiar faces. A couple that had bought a piece last fall arrived and promptly bought two more (including the one posted above), and another couple, Bob and Lori, that we had met and had dinner with last fall bought a piece. Glenn and Sharon obviously did a great job publicizing the show and so I want to thank them for their efforts. It was all so lovely. Unfortunately, I completely forgot to take any pictures at the opening but Glenn was kind enough to take a few pictures that I have posted below.

In order to not jinx sales, I have not asked any questions about sales, but Glenn understands and has been keeping me up to date. Several people came in over the weekend, specifically to see the show and then on Monday, a friend of his who had bought two of my pieces last year, came in and bought four more! So that's seven in less than a week. Cool!

And during the opening, after about the fifth compliment about my work, the bad fat day disappeared and I felt just regular finally. I am fickle like that. 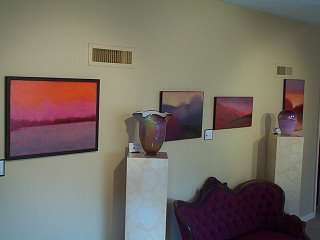 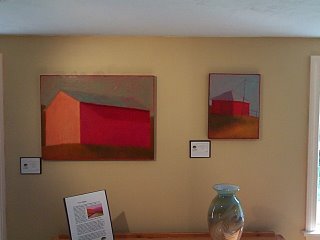 Posted by Tracy Helgeson at 7:03 AM

Hi Tracy---Congratulations on the show! The paintings in the photos look beautiful. I am envious of all those buyers...

congrats on the show! I never try on clothes! I drag them home and if they FIT I keep them.

Thanks Ann! I am very pleased with it.

Terri, I hardly ever try anything on either, don't know WHAT I was thinking that day! Must have been a fit of optimism....

Looking good on the pictures Tracy!
Nice that the gallery owners did such a good job. Almost seems like you can't buy the painting without the vase, and the other way around.

sounds wondefull congratulations the pics are great i can alreafy see those summer umbrella paintings you mentioned. done a la Tracy

Thanks, Bart, that's something that I didn't mention in the post. Glenn did an excellent job of coordinating the glassware with my work.

Hi Amber, I am itching to try those umbrellas and beach scenes too!

Congratulations, it does look lovely. I really wish i could see some of your art in person. Maybe some day.

Trying on jeans is an experience guaranteed to drive anyone bigger than a size 6 to drink. Why does no one except me have thighs?

Know just what you mean about buying clothes ... the most soul destroying pastime in the world! The older I get (and I'm pretty old) its a real fight againgst gravity! - Butt is still OK but top half is turning into Dolly Parton (but without the glamour!).