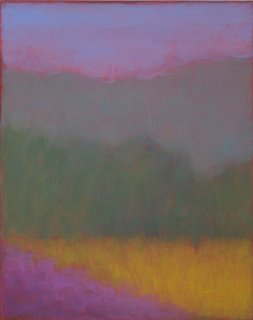 
Well, I made a lot of progress yesterday in the studio. I emailed about five images to Enderlin Gallery for them to choose an image from for publicity. I finished up three large pieces (actually I still have to paint the cradled edges and do the paperwork for them today) to take to The Harrison Gallery on Friday. And despite being dog tired and kind of headachy, I managed to do eleven good underpaintings. Smaller ones, 12x16, 11x14 and 12x12's, since I have already finished the larger pieces for both shows that are coming up. I even managed to do our 3 mile "walk around the block" which cleared up the headache. So I am pleased, and while I have a bunch of things to do today, I feel good about having to take this weekend trip.

The reason we are going to NH is so that I can get some photos and make some sketches of various scenes in the White Mountain Region. I was asked to participate in a group show at the Anderson-Soule Gallery in Concord, NH (I wrote about it here) and we have had such a busy summer that we haven't had a chance to get away until now. And it is literally the only weekend we can go (leaving the kids with the sitter, we decided that just Doug and I will go as it is a work trip. heh), as the work needs to be complete by mid-September. So even though I am overwhelmed with painting, I really have to go. Darn.....

The funny thing though, is that when I scheduled this trip and arranged for us to stay in a romantic little cottage in the woods, I didn't realize that it is our anniversary on Saturday. After I figured it out, I mentioned it to Doug who had remembered and thought that's why I had rented a cottage, rather than a regular hotel room. Unfortunately, it was too late for me to cover and I had to, yet again, admit that I had forgotten our anniversary.

We both have a history of forgetting it. One year we had lunch with friends, did all of this stuff with the kids in the afternoon and about a week later, realized that we had completely forgotten that that day had been our anniversary. It's not that we don't attach any importance to the date, it's just that when we got married, we had a lot going on. We had moved the date up a few months because we had just found out that our nephew was going to come live with us and we wanted to get married before that. Then, the day we had originally chosen turned out to be Friday, the 13th, which seemed like a bad idea to tempt fate like that if we didn't have to, so we switched it to the 12th, which still gets me mixed up. Most of the time one of us manages to remember the anniversary, it's usually just at the last minute.

Doug and I had a very low key wedding. It was just us and the justice of the peace in our living room. No reception, no dinner out, no honeymoon, just a regular day. I am uncomfortable with the whole wedding thing and we both wanted it to be yet another good day in our relationship. We had been together for five years already, living together for two and getting married seemed a simple formality. And frankly, in retrospect, the day we were married pales in comparison to so many of the days that have followed.

But I will still enjoy the lovely coincidence of a weekend away, with my husband, which just so happens to fall on our 13th wedding anniversary.
Posted by Tracy Helgeson at 8:46 AM

Obviously, your inner self didn't forget ;-) But I'm that way about all birthdays and anniversaries... all days are special, I don't need to single out just one. Put another way, don't be nice to me on just one day... I want it alllllll!

I love the wedding story, it sounds familiar.
I too am uncomfortable with the whole wedding thing. The only reason that we didn't just go to Reno was my mom. She was still disappointed with the lack of fuss. We got married at my parents house by a judge with maybe 20 family members waqtching, and then people came over and we had a mexican fiesta.

This year neither one of us remembered that it was our 24th anniversary until just before dinner that day.

Nice story--since you both forget no one has to feel bad!

Congrats on all your shows and sales. You seem to be on a roll and it's fun to read about it.

Have a nice anniversary trip.

12 August is a date I remember because it is when grouse shooting starts in the UK, and it means that walking over the open country in Scotland is just that bit more dangerous!

Have a great time in the White Mountains. I lived near Nashua NH for two years in the early 80s and love all that countryside. We were there the year that the gipsy moth caterpillars ate all the leaves!

How I envy your speed of work sometimes. I am still working on the quilt that I started in June. Still, if I will insist on intensive hand stitching ....

Hi Tracy,
No, i'm not an artist, but i do appreciate good art.
I painted when i was a chield.
I've been visiting some artists' blogs, maybe it's because i'm thinking of start painting again, i dont know...
Thx for sharing ur painting with us!