Well Now I Have a Bug Up My Butt 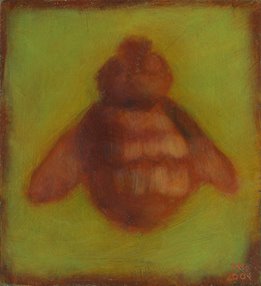 Malaysian Fly, 2004, Oil on Panel, 4x4 (I had a brief obsession with painting bugs a few years ago)

Not literally of course. But I just received another rejection letter from the national juried show at our local arts organization and now I am annoyed. I will have to keep entering juried shows now until I at least get into one, somewhere. I have a prospectus for a small works show in a nearby town and I'll go through artlist.com for more options. This constant rejection has really gotten my competitive streak going and even though I don't have time or extra work to enter, I will feel like a LOSER if I stop trying.

Speaking of being a loser, I thought I'd do a quick recap of how many times my fab presentation and slide entries have been rejected.

I have entered 17 Juried Shows in the last two and a half years, according to my records. About half were national shows like the Cambridge Art Association National Prize Show and the Artists Magazine competition, which rejected me, and then the rest were regional or local, with which I had better luck, even winning prizes in a few of them.
Juried Shows: No: 10 Yes:7 (I won 3 awards)

Arts Organizations often have a call for artist submissions. A selection committee then goes through the applicants and schedules group and/or solo shows for the coming year. I entered four of these, one of which was local and that was pretty casual, the director visited my studio and had seen my work in the other gallery in town. I sent my presentation package to the other three and was accepted by two and rejected by the other.
Arts Organizations: No: 1 Yes: 3

After searching the internet, art magazines and combing through artist's resumes, I came up with a list of galleries that I thought might be receptive to my work. I sent my info packet to three galleries in Boston, one in New York City and one in Philadelphia. I also sent my link to two other galleries in Philadelphia. I received rejection letters from all of those galleries. Reading the letters is always interesting. A few of them were actually encouraging but most were pretty "brief". My favorite was the one (in NYC) who sent back the info with a scribbled note, onto my typed cover letter that said" Thanks, but the work is not for me-Thank you anyway." Meanwhile, almost everyone who has ever suggested a NYC gallery to me has referred me to this particular gallery. Hmm. Another letter, from a Boston gallery, was complimentary and I could tell by the comments that they had actually looked at the work. It said "I find your pieces to be profoundly compelling. I am intrigued by your evocative colors and simple yet dynamic compositions. Unfortunately, we do not feel we can make a commitment to you at this time as we do not have a place in the gallery for this genre of paintings." So that started out well, but then, you know, took a turn.

I then focused on smaller galleries in smaller cities and had better luck there. I sent my package out to eight galleries and received a positive response from five. One of those gave me a solo show, and the rest offered me representation. One of the no responses eventually turned into a yes and about two or three galleries didn't respond or send back my info.
Galleries: No: 10 Yes: 5 No Response: 3

I don't recall being too upset by the rejections. I think the acceptances were sprinkled into the mix just enough so that I didn't really feel too discouraged. I also sold work pretty consistently from the beginning and that was also encouraging. Having said that though, I am pretty happy to not be sending out info anymore. Almost every time I am involved in an exhibition or event, another opportunity presents itself so I haven't had to pursue things too much lately. I am pretty realistic about rejection. Sometimes it is about my work I know, but it can also be about other things too, and either way I am ok with all of that. I'd be painting anyway, though maybe not quite so much.

It was interesting to tally all of this up, I hadn't really done it before. The competition numbers were better that I had thought and the gallery numbers were worse than I had remembered.
Posted by Tracy Helgeson at 8:45 PM

When I lived in NYC, I think it was Tuesdays that one could walk in and present a portfolio for review. One Tuesday I was rejected from 11 galleries. It was easier to cope with the rejection after a few martinis. I still send stuff out and rejections far outweigh the acceptances.

I don't take it personally anymore, I accept that it is a business. Sometimes my work may fit in with the gallery but they may also have 1 or 2 other artists working in a similar style and don't really need another. For me it's like entering juried shows, it's all a crap shoot.

You've got the skill now it may just be a matter of timing. Hang in there Tracy, your work is good and you will find the right market. Better to have a gallery that really believes in you because they will work harder for you.

I've never thought to tally up my rejections/acceptances either - it would probably be interesting to look at! From the tone of your post and you blog in general, it sounds like the acceptances have yielded a lot of positive results and sales for you.

Hi Stacers, Yes, I am very pleased with the direction that the acceptances AND the rejections have taken me. I wasn't sure what to expect when I started this painting thing again but I am busy with shows and etc and and am happy about that.

Thanks for taking the time to gather this info and post it. It's really quite informative to read about how other artists market their work and what is successful for them.

I enter several fiber juried shows every year and get into a very high percent of them - maybe 80%-90%. Which leads me to believe I don't set the bar high enough. Sometimes I think too many acceptances is kinda like not falling when you ski - it's because you aren't pushing yourself to learn and grow.

This summer I will be working on some gallery and solo show proposals and I'm expecting the reject rate to go up much higher. But the rewards will hopefully also be higher.

I've gotten into the top fiber/quilt shows but I think in the long run these juried shows don't get you much (a few sales here and there and a long resume) if you don't follow through with something more substantial and sustaining.

Cheers for another great post -- it's really nice to see such a detailed discussion of the nuts and bolts. It is funny how the rejections and acceptances ebb and flow. A good friend of mine is an author, and he amassed a stack of 30 some-odd rejections in a row, only to then turn around and have 6 acceptances for publication in the space of a few months. My own ratio is pretty positive, but the galleries where I have or will be showing are owned by people I had some previous relationship with, either through them visiting my studio, or personal contacts with other artists, etc. I'm inclined to agree with Lisa that a lack of rejections probably means I'm not casting the net widely enough, which is certainly the case, at least geographically.

Hi Jeff, Thanks, glad you like the bug, it's a weird little painting, but I kind of like it too. It is great that you have connections with galleries, I know that that is the best (and least stressful) way to get in.

Lisa, maybe your work is really, really good and that's why you get into so many! You make a good point about acceptances, skiing and not falling and about how the juried shows kind of stop moving the career forward after awhile. I think I am about to that point, but now I have the urge to get a few more acceptances, you know, so I can go out on top! Ha!

Thanks for your great posts Tracy, had some catching up to do but read them all with pleasure.

Your info provided about the presentation and galleries is inspiring and valuable to me. Especially because it is about things I have never delt with.

Hi Bart, Nice to have you back. How was your trip? Looking forward to the update on your blog! Thanks, am glad that you enjoyed my last few posts about frames and business related topics.