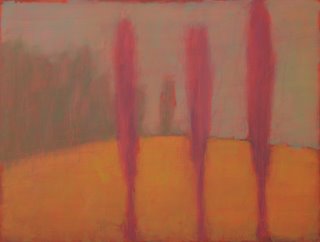 
I recently came across this blog which I have really been enjoying. But Tommy's recent post has put me on a rant concerning the war.

I remember what I told Doug, in the days after the 2000 presidential elections, while Bush was angling to claim the win. My feelings were (We had recently had a baby and I was trying to be optimistic for her sake) that I thought there was no way that Bush would be re-elected in 2004 and in the meantime he couldn't do too much to mess things up. Clearly I was completely and utterly wrong on both counts. He has led us into a terrible war, killing tens of thousands of innocent people, he has broken any number of laws and my blood still boils when I think about his lack of compassion and ineffectual response to Hurricane Katrina.

In my opinion, this administration's secrecy, "morality", "family values" and support of censorship has led to and will lead to more of this (you can read more about it here), which I find to be totally unacceptable. We are gradually being led into the same oppressive and censored environments as the countries and regimes that our government so proudly denigrate. Our freedom of speech, as well as civil and privacy rights are being stripped away and at every point, if there is complaint, we are told it is for our own safety and security.

It's all going to hell in a handbasket, unless we stop being sheep.
Posted by Tracy Helgeson at 9:44 AM

Think PAX ROMANA. The Roman emperers slowly did away with the rights and liberties of Roman citizens and they did not complain. The Roman Senate existed simply as window dressing with no real power or authority. The Roman citizens accepted all of this because the emporer gave the aqua ducts, public baths, the games in the colluseum, and a host of other goodies in order to distract them from what was really going on. Think PAX AMERICANUS.

The Roman Catholic Church discovered centuries ago that they could not control a large group of people so they sought to figure out how to get them to control themselves. The answer, GUILT! Thus we have our modern concept of sin.

Now we have fear as a motivator to control the American People. To help distract them we have rampant consumerism and all sorts of entertainment to distract the people from what is going on. Just look at our educational system. We no longer teach our children to think, we teach them how to take tests because it lulls parents into a false sense of security. Thomas Jefferson said "An educated people can govern themselves" but modern day Americans have figured out that means taking responsibility for their own lives and not having anyone else to blame.

Think BIG MONEY. Big means really big. Bill Gates just barely made it into that group. Money always seeks to preserve and maintain itself by any means possible. For money to be secure it needs the world to be stable. Poor people, having nothing to loose, create revolutions. Big money wants everyone world-wide to have enough money to be lifted out of poverty and have enough to survive with just a little more for a few extras to placate themselves. Research the Neocon (Neo Conservative) philosophy and see how Bush is trying to make that a reality.

You know, years ago the TV show The X-Files had many episodes on the power and money elite manipulating countries. I didn't realize then that I was watching a reality show. But what also amazes me is that conservative fundamentalist Christians support this president and all that he does. He wants to lead the world to one world government and one world religion. Amazingly, that is the Christian definition of the Anti-Christ! As for me, I'm an old hippie. I protested against Vietnam, I marched for civil rights, and I protested in support of the Farm Workers Union. Back then I questioned authority and I still do only today I write constantly to my public officials in Washington and rant and rave to them.

Ed, I am totally with you on all points. Have you seen this website?

It's seems so unbelievable that this could happen but somehow I just can't get the idea out of my head that this administration would do this this in order to control us and the world order.

I'm just not sure what, exactly, to do about it. I have a tendancy to rant about this but it feels like I'm preaching to the choir. Those who did not vote for Bush agree and those who did seem have a strange ability to ignore the blatant lies and broken laws.

I really believe in Ghandi's works, "Be the change you want to see in the world" so I guess that's a place to start.

I know what you mean, Shan. When we lived in Utah, there were many more people who disagreed with us about the war, but here in NY most of the people we know are on the same page. I have written a few emails but does anyone read them? I could participate in our neighbor's anti-war group, and I should do that, I guess. I do feel that I need to get more involved but I just don't have the extra time for it and then that seems like a poor excuse too.

Yeah, I've seen that 911 website and others. A friend of mine is an engineer and a conservative (he's now sorry that he voted for Dubya twice). From an engineering and scientific view he has said that what they say happened could not physically happen according to the laws of science.

You should believe that our government could and would do that to justify its actions. LBJ did it in Vietnam, it is called the Gulf of Tonkin. The US created a false scenario of an attack on US Navy vessels in order to justify invading North Vietnam. The same thing for the Spanish American War. The USS Maine (the slogan was REMEMBER THE MAINE) was not bombed but rather the boiler blew up. The US used that to create a false story in order to start a war.

In fact, I'm surprised that the US hasn't already invaded Iran. Iran is easily 10 years away from having a nuclear bomb. They cannot enrich enough uranium for a nuclear device but they can make a dirty bomb. A possible scenario is that a dirty bomb will be blown up somewhere over Isreal and the Isrealies will retaliate with their nuclear arsenal, which we have been giving them quietly over the last few years. And never mind $3.00/gal gas. I'll bet that within 5 years it goes up to $10.00/gal. As for me, I'm headed to that small town in New Mexico within a year and will try to live quietly with my family.

But, until then, I'm going to educate myself on the facts of what is really going on and challenge governmental authority wherever I can. And I'm going to complain loudly and often to them. My wife assures me that they will come for me one day.

I have been reading bits of news implying that we have already invaded Iran. The media is starting to ask questions and no one in the gov't will give a straight answer. I may have read that in at raw story or huffington post, I can't recall exactly.

A fellow conspiracy theorist, I love it!