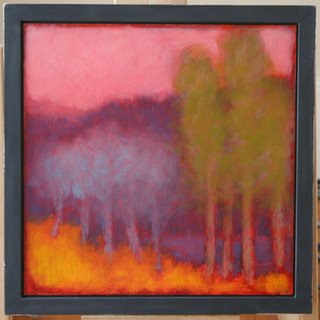 
I go way back with frames. When I first met Doug, we used to go to huge flea markets outside of Philadelphia and we were both intrigued by the old, beat up but elaborate frames. We bought several (they were overpriced, usually, or we would have bought more) thinking we'd do some kind of art with them, and those frames have traveled along with us through each of our many moves. A few years later, I started making hand-painted, picture frames, as well as framed mirrors, clocks and boxes. I did the trade show scene at the Javits Center in New York twice a year and did pretty well selling my work to gift shops. My claim to fame with that project was that the actress Linda Hamilton (The Terminator) bought one of my clocks from a store in Richmond, VA and then the best account I had was the mail order catalog Ballard Designs, which bought about 600 mirrors over the course of about 9 months. Of course I had to make all of them, then pack and ship them, so that was a bit of a downside there. 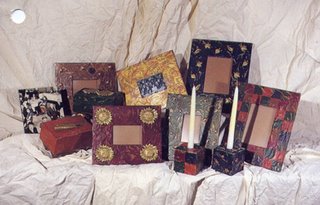 So I love frames. Big, gaudy, elaborate, gold, worn, thick, whatever. I have stacks of frames that I have collected over the years thinking that when I started painting again, I could use them. All of our children's picture are in all kinds of different picture frames. No plain ones on our picture wall! As fate would have it, however, my paintings look terrible in elaborate frames. A frame with any kind of detail whatsoever is too busy for my work.

So I began to search for simple wood frames. I could have made them, and Doug and I discussed doing it, but we have no workspace available for woodworking, no equipment and no extra time. Neither of us could bear take on any more time consuming projects like that. When I had previously made the frames and mirrors, I bought the unfinished frames pre-assembled from a molding company in NYC so I thought doing something like that would work for me again. There are very few framers in our area, but I did find a place in a nearby town and they had a simple unfinished wood molding that I liked. As I was determining the design of the frame however, I realized that I wanted the edges of the panel to be visible, which meant I would have to put together some kind of floater frame. I had the frame store put together some frames, so that the back would be the front, which was to them confusing to no end. I planned to paint and assemble them myself. This worked out ok until I needed about 20 frames for a show and their lead time was 4 weeks. Given that I am not usually sure about what work I will be including in a show until, oh the week before the opening, this was a problem.

I called our contractor, Steve. His shop had occasionally cut some panels for me and I thought they might be able to make a few frames for me. He was happy to help me out, as he is very supportive of artists and for the first batch we made a trade, a painting for frames. The great thing about working with Steve and Frank, who is the woodworker who actually makes the frames, is that they can make the molding any size, thickness, width. So if I have an odd panel, they are happy to make up a special sized frame or whatever. At this point we have settled into a good routine. I email a list of sizes and quantities that I need and usually within a week or so they are ready. They bill me for the hourly shop rate plus the cost of the poplar, so I can't really say what each frame costs, I think once I figured out that they average about $12 per frame. 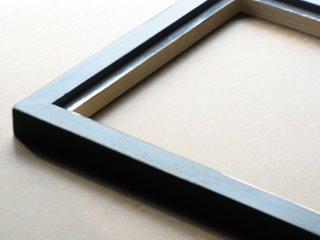 Of course, once I get the frames I have to finish and assemble the piece. I have handled the finishing a few different ways in the past, including staining them and trying to use different colors, which became very difficult to coordinate. So for the last 6 months or so I have just painted them all black. I skip the primer coat because I am impatient and lazy, paint the first coat of paint ( I paint the top and sides, not the backs, those I leave unfinished) right onto the unfinished wood, sand it, and then paint another coat. I then scuff up the corners and edges a bit with a sanding block. This gives me a frame that is black overall but isn't all shiny and perfect, which I think, corresponds nicely with my "imperfect" paintings. Anyway, because the edges of the painting panel show after being put into the frame, I line the edges of the painted panel with a sharpie so that they are black. Then I line the frame with a bead of carpenter's glue and set the painting in and let it dry. I then put the hardware on the back, a sawtooth hanger if it's about 12x16 or smaller, or a wire if it's larger. I also put rubber bumpers on the bottom corners. I usually buy all of the hardware in large quantities from Framing4Yourself.com. For awhile I was covering the back of the framed painting with paper, like framers usually do, but doing that totally sucked and I happily stopped after one of the gallery directors told me that it wasn't neccessary.

I'd say about half of my work is framed in this manner and the other half are painted on pre-made cradled panels. I hear a lot of compliments on how the frames are so appropriate for my paintings and the gallery directors that I work with approve. They are also easy to reframe if a buyer wants to do that, however in that case I really don't want to know about it! I think that the simplicity of the frames work really well and allowing the edges to show, rather than being covered by a frame, is very important to me.

So that's what I do. Let's hear your framing methods.
Posted by Tracy Helgeson at 12:51 AM

I make a similar frame to the one you use with a slight variation. You put glue on the rabbet and drop your panel in place. My frame has the same profile only I drop the mounted panel in the opening level to the rabbet. On the backside I use offset clips to hold the panel in place.

I make it out of 3/4" X 1 1/2" poplar or clear pine. I do prime my frames with an oil primer because it keeps the grain from rising. Then I spray paint it with a satin black finish. The front of the frame I paint with a gold leaf paint. What I end up with is a simple frame with a 1/2" gold face surrounding the floated piece. I spend about $6.50 in materials for an 18" X 24" frame. This frame is a throwback to the 60's.

I make it from scratch for a variety of reasons. Money is the biggest factor. Next, I can't find that frame style anywhere, at least not for a reasonable price. And I have the skills and equipment (table saw, chop saw, bottom pinner, brad nailer, and framer's vices).

I'm currently making one for a painting I just finished. When it's done, I'll put it up on my blog for you to see. Also, glad to see my conspiracy stuff didn't make you think I'm a nut!

Hi Ed, I do think you are a nut, but in a good way! Actually I totally agree with you on all points (seems as if we do the same reading) and most people think I am a bit off. Anyway, thanks for describing your framing. I am not too worried about the grain on the wood rising on my frames, that sort of adds to the imperfect thing I have going. But I can see why you wouldn't want it on your elegant frames. I look forward to seeing the frame on your blog.

For my monotype prints (which I haven't done in a while) I use Westfall Framing out of Florida. They sell very affordable raw wood mouldings I assemble myself.

My husband built the last set of frames for my oil paintings. They are wonderful--made from maple a friend gave us. Making them, however, took up a lot of his free time (which he doesn't have a lot of) so I want to get away from that.

I usually prefer simple frames around paintings, however, a friend recently framed several of my postcard sized paintings in what she called "bodacious" three inch frames. I would have never chosen this myself but loved it when I saw them framed. The fancy frame made the tiny paintings seem more monumental (for lack of a better word).

All these frame postings are interesting.

I went to a museum last weekend and noticed some very elaborate frames on modern work. I live in a town where crafts dominate the art galleries. Painting sometimes gets overlooked because people are more interested in craftsmanship. I think that making these highly crafted wood frames is my way "in".

If it didnt matter as far as sales I probably would not frame at all.

Shan, I like a wide frame on small work. I bet they do look nice. Thanks for sharing your framing info.

Aaron, I love the big gaudy frames on work that I see in Museums, but sometimes I wonder what the artist would think about how their work has been framed! Some would be horrified I think.,,