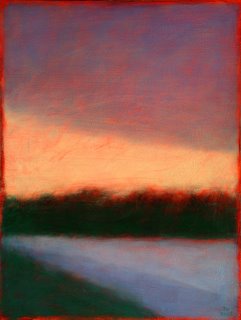 
Having been inspired by reading The Crionna Collection and The Intrepid Collector, I thought that I'd occasionally post an image and talk a bit about the paintings and photographs that Doug and I have collected over the years.

When we lived in Utah, we began to buy art, rather seriously. I wanted to buy paintings that I liked and felt a connection to without concern about whether they were good investments or not. As Doug has a background in photography (he has a BFA from Tyler School in photographer and worked as a professional photographer for a time in Philadelphia), he decided to focus on buying photographs. He wanted to buy ones that he loved and admired but that also would gain value. He has been very successful with that, having sold two pieces at a profit.

When I was in college as an illustration major, Mark English was our god. His illustrations were everywhere in the eighties and we could only dream of having a career that successful. From his website: "He has won hundreds of awards for illustration and was the most awarded illustrator in the history of the Society of Illustrators in New York." He lives in Missouri and has since moved into fine art, showing his paintings in galleries in San Francisco and at the Eleanor Ettinger Gallery in New York. Doug gave me this painting by Mr. English for Christmas in 1999 and it amazes me. Without a direct light source on it, it kind of looks like nothing, a vague, dark dreary mass. But put a spotlight on it and it has space, depth, intensity and colors (though subtle) that glow. It has been one of the most inspiring pieces to me, when I started to paint again and it has qualities that I strive for in my own work everyday. I don't like all of Mr. English's current work, but I love this one. 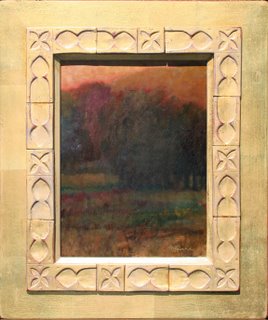 
I found when trying to photograph this painting that it's nearly impossible to capture the qualities that I described above. Despite being annoyed at not having a good representation of it to post, and I really apologize for the big shadow at the top of the painting, I am also comforted by that. I think it's a great sign when a painting doesn't give up its secrets so easily.

Over the years I have met people that have known Mark English and I hope that I will have a chance to meet him someday. If I do, I will more than likely make a ridiculous fool of myself, trying to converse intelligently with someone who I have admired for so long. He has a son, John, who is also a talented painter and illustrator and a daughter, Donna, who makes frames, including the one on the painting that we own. In fact, she made a custom frame for a bathroom mirror for us several years ago.

All of the paintings we have are my favorite, but this piece is really my favorite. I totally get it and I feel like it gets me, if that makes any sense.
Posted by Tracy Helgeson at 9:32 AM

I couldn't agree more that a sign of a great painting is that it does have secrets. My favorite paintings are layered, where I see more the longer I look.

Tracy, in my opinion, this is your best painting so far. But then I am attracted to strong color and contrast. two other artist you may find of interest are Stephen Duren, now a regional artist in the midwest, and Bill Creevy who has written books on pastels and oil painting using his own works as examples.

I have to say that the pieces on his website don't speak to me as strongly as the work of his you show here. It has a nice elusive and seductive quality, as does your own painting. And the frame... wow! I *try* not to notice frames as a rule, but this one just screams perfect complement.

Gorgeous painting, and I'll bet it looks even more so in person.

I'm in agreement that this is one of the strongest of your paintings that I have seen. And thanks for the introduction to Mark English-- I'm very drawn to some of the pieces, though not so much to others. I like the one you've shown; I can see that there would be a lot more to see of it in person.

Thanks all, for the positive response to my painting. I like it too, however, I painted it a year ago, and I am a bit worried that it ya'll like it more than my newer work :-) I will comfort myself with ice cream and with the fact it has not sold and that much of my current works has been sold....

Ed, I will look up those artists, thanks. Bill Creevy sounds familiar.

Jeff, I agree with you about that frame. I can't tell you how much I wish I could use that kind of frame on my paintings!

Lisa, I assume you are referring to Mark English's painting, but just in case you mean mine, thanks, but thanks either way!

Martha, He had several paintings that he did around the same time as the one we own, and they all had the same qualities. I have been watching his work since then, though and I agree that his newer work isn't as strong. Not to me anyway, although someone must like it as he does pretty well in NY, I've heard.

And what's about my "Amadeo Modigliani"?

Thanks, Maharal. Not sure what you're asking about Modigliani. Wish I had one of his paintings though!