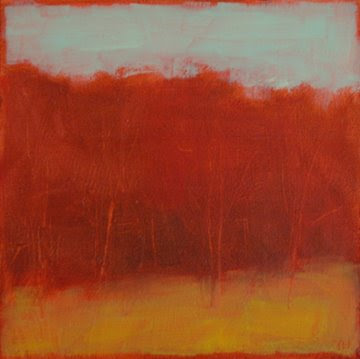 This is a good day for a few odds and ends. The painting above is from the batch of small paintings that I have been working on and I posted it because it is pretty much how it looked here yesterday. Bright blue sky, vividly colored trees and yellow fields. We tried to get some outside work done but it was actually rather chilly and I ended up inside mostly, cleaning and baking, neither of which I have done much of recently. But the grass got mowed, hopefully for the last time this year, the first batch (many more to come!) of fallen leaves got raked and put into the mulch bin and Doug finally brought down the pumpkins from our garden. This wasn't a very good pumpkin year around here, too much rain but oddly, ours did pretty well. I actually forgot about them-we planted them in the far back corner, then everything got really overgrown and I never even did go back there to check on them. Which is probably why they did so well, no one was messing with them. heh.

So they are out front now and I took a few gratuitous shots of Mr. Wilson perched on the big pumpkins. 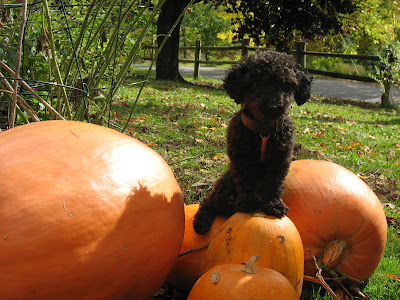 And since Ginger is involved in everything, here she is too. 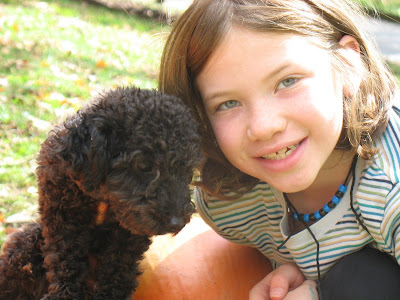 This image of Ginger reminds me of a photo that I recently came across. It's a (vintage) school picture of me in 1974 (when exactly did the 70's become vintage?), in fourth grade, same grade as Ginger is in this year. Slight resemblance, eh? 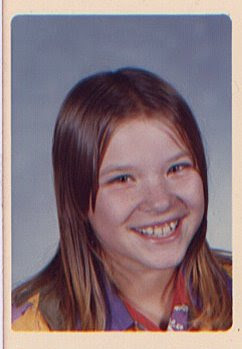 New studio news: Even I didn't think it was possible to fit one more thing into this room, but I managed it anyway. I decided not to hook up the baseboard heating this year (although I may regret that decision in January) and make do with a portable electric heater. I found a nifty one with enough btu's to heat the whole room AND it has a fake fire? What a find! I was a bit disappointed when it arrived however, as the fire is pretty realistic, well as far as fake fires go. I was hoping for a cheesier display maybe with a spinning paper log or a foil background but I'll have to just settle for improved technological illusions. 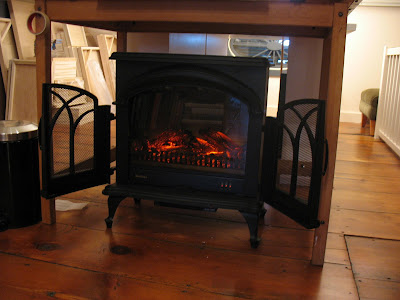 And this time of the year always reminds me of when Doug and I met in Philadelphia in 1988. This year marks 20 years for us which strangely seems like forever (almost half my life!) yet it has passed in the blink of an eye. Nothing special in the works to commemorate this anniversary, we are just trying to appreciate each day with each other and with our kids a little more than usual.
Posted by Tracy Helgeson at 1:15 PM

I'm sorry but that HAS to be the cutest little Mr. Wilson on pumpkin scene I've seen to date! Ginger is so sweet and love the warm October sun on her face. Uncanny the resemblance. Amazing the things you've produced over the last 20 years...you and Doug must be mighty proud...so congratulations. I was going to say something earlier 'bout your walls and words describing it...BUT you did a better job. I was born in Philadelphia, and I get nostalgia for it about this time of year as well. You go, girl with the semi-roaring fire!
Nina

Thanks, Shirley, I knew you'd enjoy my school pic!

Thanks, Nina, and I always thought fall in Philly was the best even before I met Doug. And my life definitely improved after I met him! Lucky girl, I am.

Great pictures, Tracy! I love fall -- we don't have one here in Florida. Well, maybe for a little while in February!

This is funny - I looked at your blog when I was loading mine up and I unconsciously named a recent blogpost "Odds and Ends" after seeing yours. I just noticed it today when I looked at your post again. I'm pretty impressionable and you're pretty powerful?