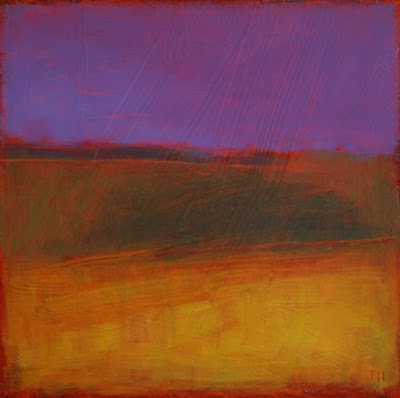 In the old days (before kids/husband/any kind of responsibility whatsoever), I only felt comfortable working in my studio at night, after dark to be exact. When I had to, I could get some work done in the daytime classes but that was definitely under duress. I was a night owl through and through and loved the night. The quiet, the darkness, the solitude, the pool of light at my table, even my scratchy eyes from being awake forever. I loved all of it and always felt as if I did my best work at night.

After the kids though, the nights were not my own anymore. They belonged to crying babies, breastfeeding, changing diapers, a snoring husband and the desperate hope for at least a few hours of sleep. Studio time, day or night, was not an option then, at least not if I was going to raise my kids the way I wanted to so I put it all aside for many years.

When I began painting seriously again, everything was different. I still felt like a night owl, but wasn't anymore. I had started waking up by 6am each morning and all of my activity was during the day; getting the kids off to school, cleaning, cooking, after school kid stuff, etc. By evening it was all I could do to stay awake until 9pm, I think because I was really working against my natural inner clock that wanted to be up half the night and then sleep in a few hours or so in the mornings. But I also decided that if I was going to work, it would have to be while the kids were at school only and that when they were home I was all theirs. This has worked pretty well for the last five years and I have been incredibly productive, even (gasp) making pretty good art in the daylight!

Now though, things are gradually changing. I still get most of my work done during the day (um well, I would if I actually had any lately, but that's a whole different post, hehe) but ever since I have gotten my own studio, which is a bit separate and even has a door that closes, I have been spending a lot of evenings working under my comforting pool of light. Not so much actual painting, but other things, like preparing supports, doing sketches, organizing ideas, etc. and quite often on the weekends I HAVE done some painting well past sundown.

I am totally loving my own time in the studio late at night, still with my scratchy, tired eyes, and cloaked in darkness. I even have some patchouli incense which totally makes me think of college, but mostly helps to get rid of the musty attic/new construction smell. My iPod has made listening to music while painting much easier (no getting up to change the album) and every song I hear now is my favorite. I even love it when Doug comes up and we talk about art while I work. Maybe this is the grown up version of studio time at art school.

I sleep even less now than I used to and although I know I could actually fall asleep at any time, anywhere, each day, I don't. And when evening comes I get my second wind and enjoy my studio time all over again and I marvel each time about how cool it is to have my nights back.

PS. Well I should add that I do go to bed a bit earlier several nights per week now that the TV season has begun. Oops, so much for the love of art. Heh. Sometimes mindless wins out.
Posted by Tracy Helgeson at 8:51 PM

I love reading about how other artists organise their work time. I have an evening habit too, but that is mainly due to college/university/work forcing me to work late into the evening. Even though I don't have those restrictions any more, I do still find the evenings a productive time for me.

This piece really has that quality of light - lovely work, no matter when you do it.

i've always wondered how you manage to do it all being a mother of a large family. I only have one little guy (so far) and I'm exhausted by the time he goes to bed (7pm). But that is when I work. And Sunday. I have been far less productive once he turned one, but I'm ok with that. He is only this age once! However, i would like to get more sleep so that the bags under my eyes could go away. :)

Thanks Kari, and I like knowing how others work too. I think it's so much easier to work at night while in college, maybe because doing an all nighter didn't have quite the same effect as they do now:)

Ha, what would you choose, gary?

Hi Bridgette, well, i am almost always tired and when the kids were little it was all I cold to to keep up with them, let alone make any art. I think it's awesome that you get any art done at all!