Art in the Family 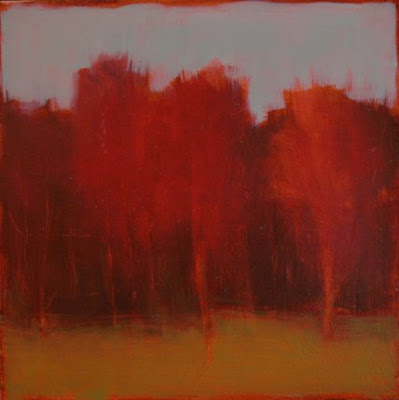 So with two parents who are artists* all of our children have varying degrees of and interest in art. Our oldest son, who is handicapped and is also adopted has seemingly picked it up by osmosis. Language isn't his strong suit and he never participates in any art projects at home. However he does wonderful things at school and we are always blown away by whatever drawing or painting or sculpture actually makes it home.

Our 13 year old son has probably been the most consistently interested in art and has been telling us that he wants to do to art college for years already. He loves pottery and I have a whole bookshelf full of clay bowls and sculptures to prove it. He has recently been really into throwing pots, however that's been on hold during football season. He doesn't draw too much anymore but once in awhile he does something wonderful, he did this sketch of Penny when he was about nine: 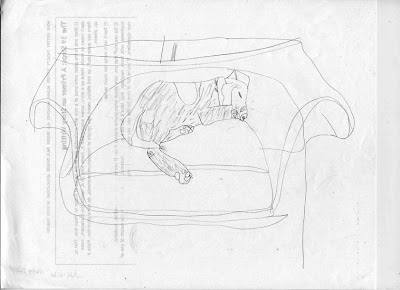 When he was younger, he went through reams of paper, writing and illustrating the adventures of his character FUNNY BUNNY in comic book form, based on a beanie baby that someone gave him once. You know, Funny Bunny Saves the Sun from Blowing Up, Funny Bunny vs. Godzilla, that sort of thing. He has also played around with computer animation and you can see a few of them here. (obviously he is not 21, shhh)

Our oldest daughter, who is now eleven, has not done much in the way of drawing or painting over the last few years, although she has been doing a lot beading and other craft projects-things she and all her friends enjoy. This year she began middle school and has simply fallen in love with art, thanks to the awesome art teacher at her school. She is so excited about everything she is doing in the class and has also joined the school art club (she also is in the drama club and plays clarinet and will be starting piano lessons soon). I bought her some pastels and she has been busy doing all kinds of drawings in her sketchbook and then last night she did this self-portrait in watercolor: 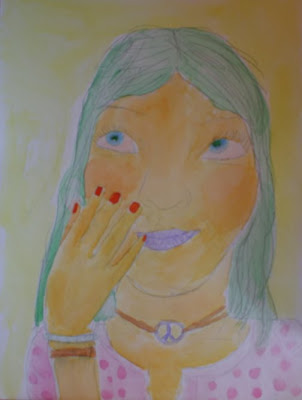 I may have to get some tips from her on the portraits I am working on.

Our youngest daughter, Ginger, LOVES painting and her artwork has graced a few of our holiday cards. She is incredibly enthusiastic about everything and I suspect that she might make a very good assemblage artist someday, based on the fact that she is a total pack rat and is always hot gluing stuff together. In the meantime, she is also involved in music, plays percussion in the fourth grade band, and does lovely, very elaborate drawing of animals and ladies with up-do hair styles.

Of course art projects have always been a big thing around our house, but the kid's interest in them comes and goes. We don't push it either way and just try to go with whatever they are into at the moment. We have a lot of art on our walls, which we enjoy but the kids don't seem to pay much attention to any of it. Maybe it is soaking into their sub-conscious though, I hope so. And my older daughter has been spending quite a bit of time lately looking through my art books.

I love though, that they all have a wide variety of interests, with art being just one of them, which is something I didn't really have when I was a kid. I was sort of pegged as an artist when I was young, which was fine, I knew that I wanted to be an artist when I was five, but when I made noise about doing other things, like writing or being a special needs teacher, I didn't get any encouragement. I grew up believing that I was good at only one thing, something that I have tried to change as an adult, by learning how to do other things (um except for math, which I suspect I will never figure out). So that is a lesson learned and while our life clearly revolves around art, we make sure to encourage and support our kid's other interests too.

However, I can't say that Doug and I won't be doing more than a few happy dances if anyone decides to attend art college.

*Doug has a BFA from Tyler in photography and sculpture. He is an artist at heart, and his interest in photography led to holography, a field in which he was very successful, both as a creator and and in the business side. But he will get back to his own art someday, I know.
Posted by Tracy Helgeson at 10:17 AM

...and your son is welcome back here anytime, to make pots or talk pots or whatever.....

Thanks Gary, we may take you up on that. Even if it is your turn to visit us:)

yesterday my older daughter came home with a sheet she must fill out for next weeks "student of the week" and the only think she had filled out on it was "my favorite thing to do is - ARTS"... she too since the age of 5ish has said she wants to be an artist.. brings tears to my eyes.

Clearly you are doing a great job with them. Football and art! The new Renaisaince man!

Natalya, that is so sweet, so many of us know from such a young age.....

Michelle, yep he is pretty multi talented. BUT. He isn't going to keep playing into high school, because he doesn't like the "toughness" that that requires. Our son is a gentle soul.

Great post Tracy. I agree. Let them explore and experience different hobbies and activities, and provide your support and encouragement as they learn for themselves what fits them best and what brings them the most joy!

Thanks Robin from Berne, well that's the plan, to provide encouragement about everything, however I suspect they do know our preferences:)