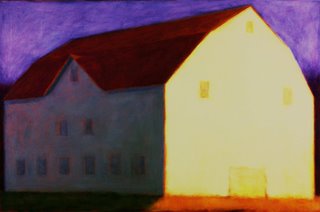 Last year at this time, things were just starting to move forward for me with the art thing. I had been in a few local exhibitions, and a had several upcoming shows scheduled. I had started to be accepted into juried shows and was also in a thing called Projekt 30, which is an online juried show. Between that and the page that I had set up at Absolute Arts, I had also started getting all kinds of odd requests, mostly involving the "opportunity to sell three or more paintings to an interior decorator in Nigeria, and could I include in the shipment 6 Sony cordless telephones also?" I was contacted by two "vanity" galleries, which are the galleries that require the artist to pay at least several thousand dollars to have an exhibition. Another gallery (on the west coast) seemed like a good opportunity for representation until we got to the contract stage. Their terms included not being responsible for insurance coverage for art in their possession (attention all artists: THIS SHOULD BE AN IMMEDIATE DEAL BREAKER!). They were also in the midst of moving and would be storing their art for 3-6 months, but still wanted my work right away. I did contact a few of their artists and the gallery was legitimate, but everyone said they didn't really sell anything there. With all of my alarm bells ringing, I ended those negotiations. So I was getting solicitations from Nigeria, vanity galleries and bad contract offers, not to mention an old friend who kept writing me crank emails asking me if I would do a commissioned piece (thanks Brian), and right in the middle of all of this, a guy named Glenn wrote me an email.

He had come across my work at Absolute Arts. He and his wife, Sharon, were preparing to open an art gallery, called the Salt Meadow Gallery, on Cape Cod, in East Sandwich. He seemed sincere and complimentary about my work, and provided a lot of information about what kind of gallery he was planning to open. Poor Glenn! His timing was so bad! I put him through wringer with my response. How do I know you are opening a gallery? Do you have insurance? Who are the other artists whose work you will be showing? I need proof that you have a space and on and on. Well, he was a trooper. He offered to send me a copy of their lease and business license, he sent me a link to their Better Business Bureau application and even gave me their banker's phone number. Feeling foolish, (it's not like my paintings are deKoonings or anything!), I half heartedly checked out the BBB listing, contacted one artist and called it good. I actually had a good feeling about him based on his response to my suspicions, he was understanding and eager to provide info that would reassure me. And while I always do what I can to check out a potential gallery, I also listen to my instincts which, so far, have been accurate. Glenn and I have established a great working relationship and he and Sharon have been just dreamy to work with. He is very enthusiastic about my work and they do a great job of selling it. In fact, they were the first gallery to sell one of my largest sized paintings, a 24x36 barn (pictured above). Last fall, Salt Meadow held a "meet the artist reception" for me and the event was lovely, There was a good sized crowd, they sold several of my paintings that evening and then a bunch of us had a great dinner afterwards. This event was also memorable for me because afterwards I had to institute the spousal 2 drink maximum rule at openings for my husband, as he drank too much wine and became foolish, not to mention somewhat hungover the next day.

For 2006, Glenn has decided to hang a show (normally they display salon style) each month featuring one artist. Glenn was kind enough to let me choose which month I prefer, and HELLO, August seems like the best month to me!! So I am having a show at the Salt Meadow Gallery this August, which also gives us a good excuse to have a family vacation in Cape Cod as well.

Nothing nicer than Cape Cod in August. Lucky you! (Congratulations on the show.)

Thanks, Jan. I am really looking forward to it. I have yet to go there during the summer, although I'll have to work on a tan before I get there, so I don't frighten away young children with my glow in the dark white skin!

AARON-HOW DO YOU MEAN?! Are you yelling at me or is your shift key stuck :-)