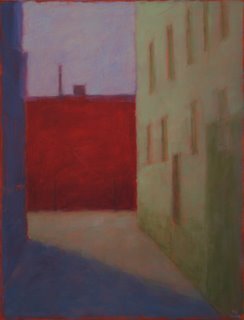 In a recent post I mentioned how I generally work from photo reference rather than real life. The exception to that is the unclothed model, of which I have always drawn from life.

I have a long history of working from the photo. In junior and senior high school, I painted or drew portraits of popular performers such as John Travolta (I was a HUGE Grease fan in eighth grade), and Leif Garrett (my profound apologies about that), and later on in high school, I did many, many drawings of Jim Morrison of the Doors. For awhile I drew copies of the Grateful Dead logos, made buttons and sold them for a dollar to the deadheads at our school (and yes, I am now aware of the copyright infringement involved in that). In fact, at our 20th class reunion, former deadhead turned math teacher, Hal Norman and I were talking and he said he had recently come across a box of things and found some of the buttons I had made. I did my share of making up images and working from actual objects, like still lifes with flowers, vases, and that sort of thing, but mostly I liked reproducing what I could see in the photo.

In college this changed a bit during the foundation year. We worked from the model, from still lifes and of course, did the typical and never-ending studies of cones, spheres, and cubes. We were also required to do more conceptual projects, which was something I struggled with. I have always wished that my work could have more concept behind it and I tried, but the reality was, my ideas were usually just dumb. So when it came time to choose a major, I decided to transfer to a school that had an illustration department, because I felt I needed to be "directed" and also because the painting department (I was at the Minneapolis College of Art and Design) at that time was filled with abstract painters and instructors and I knew that wasn't right for me. As an illustration major it was often necessary to work from photos and we were encouraged to do so, as well as to combine multiple elements to form an image. There were also mixed messages regarding this however. Once I painted a really nice portrait of Bette Davis from a photo on the cover of People magazine. There happened to be a visiting illustrator, Charles Santore, giving a critique and I put up the portrait for him to review. He totally ripped me apart for using a photo as the reference. This was slightly puzzling to me, because a). I didn't think Bette would pose for me and b). illustrators do portraits of celebrities ALL OF THE TIME using photo references. In fact that was the assignment-to paint and capture the likeness of a well known person, using a photograph.

However, I must admit that I have often been a slave to the details of a photograph. A year or so before we moved to NY, I did a number of paintings of decrepit buildings and garages and that sort of thing, based on photos that my husband had taken. It was a great way to dip my toes back into painting, but it was also the point when I realized that I working like that wasn't right for me anymore. My eyes had changed and my intent had shifted. I wanted express myself, not translate. The next project I started was learning how to use pastels and for awhile I mostly did pastel paintings of fruit and flowers, working from life, which led me to doing the landscape, as I discussed on Friday.

I don't know if my focus on working from photos was a help or a hindrance to me and my development as an artist. Maybe both. If I hadn't had references I may have been able to develop more of a conceptual way of thinking. On the other hand, I may have not even bothered to do anything creative without the inspiration of great photographs of a supremely sexy (well, to a high schooler), if somewhat sleazy, dead rock star from the sixties.

April's Art News has an article about how common it is for painters to use photo reference, and how there is still, after centuries of use, some unease as well as acceptance about the practice. I found the article to be comforting. Clearly there are so many ways to be an artist and my way of working is right in there along with everyone else's. With varying results, of course.

Today's piece is an image which seems to be a bridge between the simplistic landscapes that I normally do and the busy, more complicated street scene, which, yes, includes figures, that I plan to post tomorrow.
Posted by Tracy Helgeson at 11:15 PM

It is a difficult discussion indeed. I noticed that hardly anybody in the article you linked to mentions the disadvantages of photographs such as black shadows, "falling buildings", diminished background mountains, different colours, the rather two dimensional look of wide views etc.

Don't you think we miss a lot by looking at pictures of your paintings in stead of the real paintings?

But that being said - I agree about most of the advantages of pictures, as discussed for ex. in this recent post in a blog called "Making a Mark".

Looking forward to the next picture of your paintings.

You are right, it didn't really get into the variables of working from photos. I think its focus was more about the current perception in the artworld about using photo references.

Good link that you included and I agree with her comments. However I will go further and apply her observations to work from life as well. For example, if you don't have a basic knowledge of anatomy, drawing the figure can be very difficult, because the eye can be as tricky as a photo.

this painting reminds me of De Chirico

Thanks, Aaron, I take that as a compliment. I am huge fan of his, I have always admired his work and imagery. Just kidding, my husband told me to write that, I just had to google him because I couldn't recall his work. Doug does like him though.

I can see the similarity.

It sounds like you have a pretty impenetrable theory on painting form photos, but I have a theory of two for you. Just to let you know I paint about 80% of the time from Photo's, but I do try and get out once a week. I think a strong rational like you have can be built on the comfort zone of how you paint can lead to approaching working in the same manner repeatedly. It's like breathing in Yoga or meditation. The more you do it the better you feel. Will you grow as an artist in that repeat mode? Yes, you will keep getting better as long as you keep working all the time. But are you missing the possibilities of discovering a new feeling of color, light and value by not working outside? I think yes. Photo's give a limited rage, they help you organize because they give you a more limited rage of choice.
I usually use my digital camera to help me compose in my view finder and to help with proportions and massing my value shapes. That way I have the best of both worlds, but then I put the camera down and let nature envelope me.
The one thing the camera can't capture is the feeling when your are outside. Some might laugh that off as being to spiritual, but I think it's especially important to the more expressionist artist like yourself. I'd try it, you might like it.

like to see some of your GD art sometime. I bet it's cool.

Hi William, I appreciate your comments and understand your points, and after rereading my post I can see that I didn't really make it clear that my use of photo reference has evolved greatly over the years-and will continue to do so. In fact, I think I use photos only about half of the time at this point, mostly as a reminder of a scene that I was affected by, that I had seen and experienced in real life. I do occasionally do pencil sketches or pastel drawings outside just for fun, or as an activity with my kids, but it is impractical to do my "professional" work outdoors because of the glazing aspect of how I paint. Despite not working on site, I feel very connected to the landscape around me, I can see it and feel it everywhere I go everyday. So I am not missing out on the spiritual aspect, which even though I am not the outdoorsy type, is very important to me and is why we live where we live, out in the country.

You know, I am certainly not ruling out the possiblility than in say, five years I may be exclusively working plein air. Everything is a process, hopefully, and I have done 180's before and will again I am sure.

Hi Jason, I had trouble figuring out what you meant by GD, when my husband, middle-aged deadhead, reminded me about mentioning the Dead. Duh! Alas, that work was either sold (inexplicably, because I think it was probably awful) or has been lost over the years. That's my story and I am sticking with it :-)

Just found your blog today. I'm so glad! Your work is beautiful and I'm always thrilled to find other artist moms.

I'm a painter and sometimes use photographs as references. I'm currently working on a body of work based on everyday scenes from in and around my home.

Because I want some of these paintings to include the people in my home and neighborhood I have to use photographs.

Now, though, that the weather nicer I find myself outside working on paintings of my play equipment in my yard. Working from life often loosens me up but I love the detail I can get when working from a photo.

For other bodies of work I often work from my head, pulling in photographic references as needed. I think this is true for a lot of artists.

Hi Shan, So glad that you have visited and I agree, it is always nice to meet other artist-moms. I look forward to reading your blog!