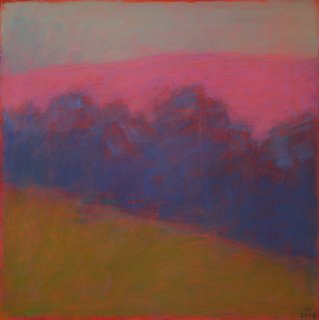 
Wednesday was a beautiful spring day, perfect for a long drive through upstate NY. As I got closer to Woodstock, I noticed the forsythia was blooming (it hasn't bloomed yet in our area, as we are further north) and it was just stunning, all yellow and wild branches everywhere. I was in hurry to get there as I was running late, but on my way home I was able to stop and get a few pictures of the forsythia as well as a few barns that had also caught my eye.

Class was good, and Jordan had looked at my work on my website so he was able to offer me some advice on how to approach painting the figure. An interesting suggestion he had for me was to take more care with my marks, to be slow and deliberate when creating the shapes and forms of the body. This may seem super obvious, but I was approaching the drawing of the figure in the same manner in which I approach a landscape drawing. With the landscapes I am more sure of myself, working by instinct rather than conscious thought, keeping the marks simple and bold in order not to overwork, which is exactly what happens when I analyze or do too much planning or fussing. However, with the figure it is necessary for me at this point to be more careful and thoughtful and to learn my way around the anatomy (again). I spent about an hour and a half working on a monochromatic, reductive oil drawing, using a cloth to pull out the light areas and form the figure. After a few false starts, easily remedied by coating the surface again with paint, I came to a point where I was somewhat pleased but more importantly I could start to see what might come next for me and the figure. That said, I didn't really like the drawing and thought I might rub it out so as to use the surface again for something else, but Jordan told me that I should sign it and keep it. So because I am fickle and will start to like a piece just because someone else does, I decided to keep it. I have posted it below. Keep in mind that I do not think it is fully resolved, I am viewing it as a study and while I think there are some good aspects to it, it definitely could be developed further. I may fiddle around with adding some glazes and color to it, which will probably wreck it, given how unsure of myself I am here but wrecking things is surely inevitable in this process.

Another thing I tried was drawing in line and contour only. I was reading Studio Notes the other day and Terry was discussing how he had his students do an exercise in drawing in contours and line rather than "shading" to create the forms of the model. This is what he says:

"Most people, when they're starting to learn, will focus on drawing the contours and try to achieve dimentionality by shading. Seems logical--afterall Michelangelo worked that way (according to Harry Carmean)-- but it seems even more logical (to me anyway) to build forms from the start, without the help of "shading". At this stage, "shading" (in quotes because i hate the term) is a crutch, a cheat. So I had everyone draw only with line, relying on contours, cross contours, overlapping forms and drawing through to achieve volume. This forces us to really make an effort to see the form on the model".

I thought this was interesting and felt that that was exactly what I had been doing over the years, quickly going through the motions of drawing the lines, without always seeing properly, in order to get to the fun part for me, which is to "shade", to create volume and mass with highlights and shadows. Unfortunately, the drawings I did in line only, turned out to be horseshit. Clearly, I need to work further on this aspect of drawing the figure as well. 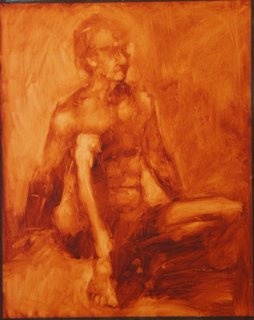 Posted by Tracy Helgeson at 9:37 AM

Good for Jordan. I used to do various workshops and teach at my local Arts Council. I told students similar things to what Jordan said. First it is amazing how many students want to jump right into painting without knowing how to draw. Painting is just filling in the shape. I always started with contour drawing. I found most people look at things but don't really see them. Instead of drawing what is there, they either draw a cultural symbol (how many times have you seen children or others use the CBS eye logo?) or they draw what they think is there. A good model can always tell who in the group is doing the best drawing. How? By seeing who is looking at the model more than their drawing. the students who look at the model for a few seconds and then submerge themselves into their drawing for a few minutes will usually get it wrong. For every small mark I make, I spend up to a full minute looking then I make a mark that might take 5 seconds or so.

As for keeping a piece that you don't like, I do that often myselfIt's a good reminder of what I have problems with and what I need to inprove. I learn more from my mistakes. I have also told students to take each "finished" work and put it away and don't look at it and to keep doing this process. Then a year later, go back and look at those earlier works and see how much they have grown.

Hi Ed, Oh, believe me, I have saved plenty of drawings that I don't like! In fact, I think I still have, somewhere, all of the figure drawings I ever did in college and since. It's almost gridlock at our house :-)

This sketch has some of the feel of your landscape paintings, which I really like. I especially like the darker tones and volumes that bring the lower half of the body out front. My old teacher, Philip, used to say that if you don't like a piece you probably haven't delved into it deeply enough. That was a valuable lesson to me because I used to stop on pieces half finished because I was frustrated with them. Now I usually have several pieces underlying the finished image, but I think the struggle shows in the surface texture. Your issues are clearly different, of course. I will be interested to see where the figure work takes you. I'm also working on a figure that I'm interested in (finally!) which seems like some sort of progression from the work I've been doing. We'll see.

Hi Martha, That sounds like good advice from your teacher. I will remember that. Although I have a tendency to overwork, so stopping at the right place is the real trick for me. Glad that you are moving along with the figure and I hope you will put some up on your blog soon.