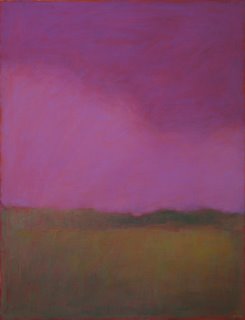 
Saturday was an interesting day. Doug and I spent the morning trying to avoid the booby traps set around the house by our son. In my day, April Fool's Day was a chance to completely fool someone into thinking that you were actually a russian spy or that an alien had invaded your younger sister's body. Now it seems to be the day that you try to kill or maim or annoy your parents by winding thread from doorknob to doorknob throughout the house or by placing objects on top of the doors which would fall off when you open the door. The most effective thing he did was to tape the cordless phone to the base which, when I removed the tape, pulled off the battery case, which then fell out and narrowly missed breaking one or more of my toes, making me feel like a fool.

By noon, we had gotten out of the house alive and had a nice drive down to the opening at Enderlin Gallery. It was a good show, lovely paintings of flowers and well attended. I spoke with someone who is trying decide about buying one of my paintings and another piece may have sold also. We stayed for about an hour and then drove down to Woodstock.

We must have mental to not move to the Woodstock area when we decided to relocate to NY. I love it there! Besides the beautiful landscape, my people are in Woodstock. Natural types, midwives, yoga, whole food stores, galleries and artists abound. In the summer it is full of tourists, but right now it's still pretty quiet and we spent the afternoon checking out the galleries and shops in the center of town. I bought an embroidered hippie-dippie type shirt here: 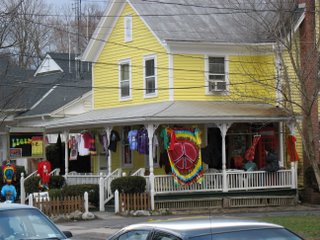 and we marveled at the variety of handblown glass pipes and elaborate bongs that were available in many of the shops. What are the laws on selling drug paraphernalia anyway? Guess I am still thinking of Utah where there was NO CHANCE IN HELL that you could find a bong in a store, let alone in a clear glass display case visible the moment that you walked in the door. Anyway, I have spent quite a bit of time in Woodstock over the last year or so. Last summer I took two figure drawing workshops at the Woodstock School of Art. One was for 3 days and the other was a whole week, and both times I stayed here which was a total trip. There is such a strong artist's community thriving there and I can't tell you how much I wish we could live in that kind of environment. I love our old house and our "spot" but the thought of living in that community is so tempting. I think we will be keeping Woodstock in the back of our minds as a future possibility.

In the meantime, we got home and I wasn't at all surprised to find 6 rubber snakes when I pulled back the covers on my side of the bed. I calmly added them to the plastic spiders on Doug's side and went to sleep. Doug actually didn't notice them until the morning, which had our son feeling quite proud all day that his dad had slept on a pile of fake spiders and snakes. Still not sure about that qualifying as an April Fool's joke, but I appreciate his consistency.
Posted by Tracy Helgeson at 8:32 PM

Hi Tracy,
I'm a new reader to your blog and I love your work!
When I read todays entry I had to reply. I grew up in Saugerties and spent my "formative years" in Woodstock, at The Pub and "Joyeous Lake." I took art lessons at The Young Peoples Studio and The Artist League.
I have a brother that still lives there and visit whenever I can.
I am a painter as well or hope to be, now that my children are grown. I admire you multi-tasking ability, something I was not good at. Although little did I know that when my daughters were young and would promise to be quiet and just watch if I let them in my studio, that they would also become artists, now in their 20's. We often joke and say they should have obseved their father at work more often, making money!
I wonder if you would mind sharing with me your glazing technique, that gives your paintngs their wonderful luminosity.
Thanks again for your great blog, I so enjoy your work.
Karen Adamshack

Hi Karen, Thanks for finding me and commenting. Did you like growing up in Woodstock? How are the schools? Maybe you could email me privately sometime and give me the scoop. What kind of work do you do? I will at some point discuss my glazing in a post, although there isn't really much to it, Finding the right combo of colors is what's important and those are different for everyone.

My kids have also not been watching the right parent-they want to be artists too.

Where do you live now?

We LOVE woodstock. WE've camped near there a couple of times and have always made time to go in and hang out there. The AA meetings there are awesome, too! Maybe we'll all end up there!