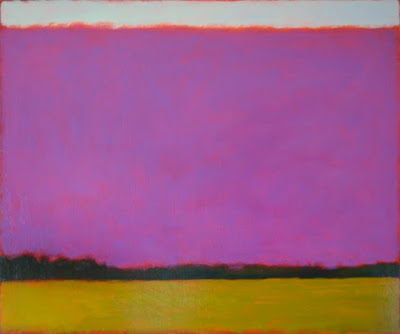 So Chair Lady was accepted into the regional show at the Cooperstown Art Association and Doug and I went to the opening reception last night. We didn't stay too long because we had to get to our daughter's softball game but we had a nice time, talked to some friends and munched at the food table. Actually, I had exactly two things and they were both so spicy that I had a runny nose the rest of the evening. Awesome!

The work in the show was good but it became clear as we saw which artists won the prizes that I probably should have entered a landscape. Well, if I was intent on winning something. Heh. I do like to win, who doesn't? But I am still glad that I pushed the envelope a bit and entered something different. And a number of people mentioned that even though mine was a figurative painting, they still immediately recognized it as my work.

But the best part of yesterday (well besides watching my daughter play really well in her very first softball game!) was getting two large Black Paintings done. I spent most of Thursday SO not sure about what I was going to do with them, but finally that night I managed to eke out a few sketches of compositions that seemed like they might work. I still needed some time to settle in (procrastinate) on Friday morning but at about 1:30pm I stepped up to the easel and just whipped out the two paintings, it's like they just flowed right out of me. Love when that happens, that feeling is one of the things that makes being a painter chick so great.

Sure don't need a prize for that! 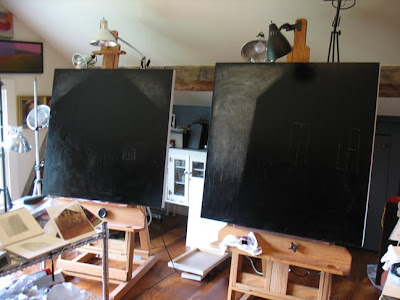 Posted by Tracy Helgeson at 8:27 AM

congratulations on the Chair Lady's acceptance and on feeling like a groovy painter chick that you are!

such nice colors in this picture! Can you share your thoughts behind this one?

The black paintings are wonderful. SO glad your chair lady was accepted into the show.