One Up, One Down 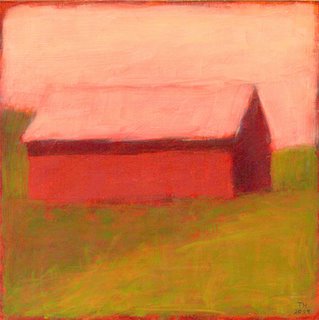 First of all, I really must say how excited I am about having finally figured out how to add links, both to the sidebar and to the text. Like I said the other day, I am totally dense about computer related things but usually I am able to figure things out eventually. However, I do think that blogspot doesn't really explain how to add the links very clearly. I thought it was me, but Doug, who is way better at computers than I am didn't understand the instructions either. And I take another leap into the current century!

So Doug and I went to the opening at Enderlin Gallery (there, you see what I did!!!?) on Saturday. When we arrived, there were only a few people there, but gradually more came in and it was pretty busy for the next few hours. I had a nice chat with artist Judith Reeve whose work was next to mine and I also spoke with a nice couple from NYC who liked my work. I chatted with Bonnie and her friends. Bonnie bought one of my barn paintings (pictured above) at another show I was in last fall in Roxbury and was interested in seeing more of my work. It seemed that only a few of the artists in the show were there, or I had missed them, so that was too bad. I like to talk to the artists that I am showing and compare notes about what's going on in our small world. Roxbury is a cute little town, pretty quiet in the winter but their season really gets going in the spring. There are a lot of weekend homes owned by people who live and work in the city. Roxbury is similar to so many other small towns in upstate New York, well and everywhere, really, in that is a small town, kind of in the middle of nowhere, with a strong art community and with galleries and arts organizations scattered like jewels into each environment.

Today I am off to Saratoga Springs to pick up some paintings that I had in a three person show at the Arts Center Gallery. I got this show by submitting my work to the Saratoga County Arts Council, it was juried and then they schedule you into a show during the coming year. This show had been scheduled since the fall of 2004. At the time it seemed so strange to have something set up so far out, I mean, really who knows what will be happening in 18 months? Since then, however, I have come to find out that this is common. Most of my shows now are scheduled at least six months or more in advance. In 2005 I was accepted for a solo show in November 2007! I've had it on my calendar for almost a year and it's still almost two years away-it's surreal. Anyway, the show in Saratoga was good, so far at least 4 pieces have sold and the opening was busy. They do an artist's talk during the opening which I had been stressing about ever since the show had been scheduled. Myself, artist Betsy Krebs (the other artist, Arleen Targan, couldn't attend) and the gallery director sat at a table and there were about 20 or 30 people sitting in front of us. The director, Joel, was very organized and asked us specific questions, which was really helpful and then we answered a few questions from the audience. Despite being nervous, I spoke coherently and didn't vomit which is what I usually feel like doing while speaking in front of a group. Betsy is a teacher and more talkative so I could sit back a little bit. A few years ago I had a bad experience with an arts org. that I will blog about at some point, so I am always watchful when showing at one, but The Arts Center Gallery is a good example of a well organized and professional arts org that is a pleasure to work with. They have a number of loyal volunteers, including Lew, a very sweet, older gentleman, who did an excellent, excellent job of hanging the show. He also bought one of my pieces so he's my new best friend!

These are some shots of Saturday's gallery reception. It's a beautiful space with a lot of natural light, high ceilings and an upper level where art by the gallery's artists is displayed salon style. My work is on the right in the first photo. 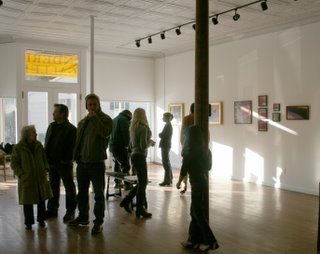 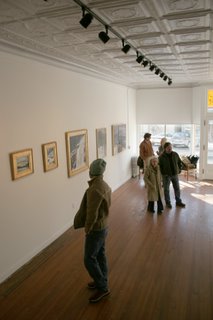 Posted by Tracy Helgeson at 9:04 AM

just found you by pokin around on Blogger. I adore your colours! "Pink Poppies" is delicious and I wonder if you sell prints? Glad you are online - beautiful work to share. Thank you thank you!!!

Hi....checked out the Enderlin Gallery and of course your paintings. Love the bright colors!!!! Mom

..and I looked at your work at the Anderson-Roule Gallery. When did you start doing flowers? They're beautiful!!
Mom again

Wandered over from Cecily's page. Love your work!

Hi Molly, Thanks for visiting!