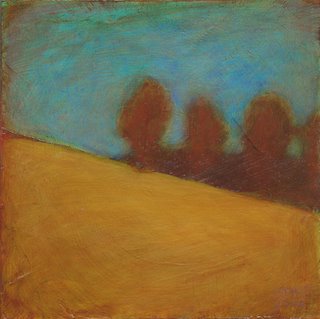 
My drive to Saratoga Springs was nice yesterday. After I picked up my work, I stopped at the Borders there and bought three books, About Rothko by Dore Ashton, The Van Gogh File by Ken Wilkie and The Letters of Vincent van Gogh. I can't wait to start reading them, however I have a book about Giorgio Morandi on deck (although I may bump up Rothko) and I have to finish the novel I am reading currently, The Falls by Joyce Carol Oates, who is one of my favorite authors. I usually alternate reading fiction and art books. The last book I read was DeKooning's Bicycle by Robert Long. I liked it, it's a charming little book with a great concept: profiling artists and writers, such as deKooning, Jackson Pollack, Frank O"Hara and Jean Stafford, among others, who relocated to the outer edge of Long Island, where they proceeded to have success in their professional lives, well, until they pretty much died tragically. I used to have more time to read, in fact there were days when I would just read all afternoon or stay up until 2am reading a good book. Alas, those days are long gone. My reading time is now limited to the five minutes that I have between getting into bed and falling alseep. It takes me forever to read a book these days! I loved deKooning by Mark Stevens and Annalyn Swan, and even though it took me months to read it, I actually missed having it in my life it when I finished it. I was surprised to realize how much it had affected my daily life.

I have always been a reader. As a kid that was my favorite past time. The first chapter book that I remember reading was Little House on the Prairie. My grandmother gave it to me for my ninth birthday and I still have lovely memories of sitting in a chair by a window while it was snowing and being totally enthralled with Laura and her family's adventures. Of course, I LOVED the illustrations by Garth Williams, they had personality and such volume! I proceeded to get all the books in the series and I still have them. In fact last year, my daughter read all of them. Anyway, I read everything I could find and especially enjoyed series, Nancy Drew, Trixie Beldon, Betsy and Tacy. As I got older I plowed through classics, F. Scott Fitzgerald, Ayn Rand, JD Salinger, Mark Twain, John Steinbeck, Louisa May Alcott, etc. I then spent a number of years reading true crime books, starting with Helter Skelter, Fatal Vision, and continuing through all of Ann Rule's books. When I became pregnant, I started reading books about health, childbirth, breastfeeding. Just as I can often mark a new direction or change in my work by a specific painting that I have done, there are several books that precipitated change in my personal life as well. Some of those are:

Best Word Book Ever, by Richard Scarry. I learned to read from this one.

Little House on The Prairie by Laura Ingalls Wilder. I loved the whole series but don't get me started on how the tv series nearly ruined that for me!

The Thorn Birds by Colleen McCullough. Stupid, I know, but I was 12 and it described a lot of things that I was too young to know about.

Ethan Frome by Edith Wharton. The story haunts me to this day.

The Handmaids Tale by Margaret Atwood. This one both scared me and pissed me off. Reagan was president at the time that I read this and it did seem possible that this could happen.

Helter Skelter by Vincent Bugliosi. Which totally freaked me out when I realized that I was up reading at 3am, on a hot, muggy August night, in my not very secure apartment in a bad neighborhood in Philadelphia, on the very anniversary of the date of the Tate murders. I was drinking a bit too much that summer and had a bit of a drama thing going on.

The Stranger Beside Me, by Ann Rule. I learned that serial killers are not what you think they are, they can, and often are, good looking and charming. A good bit of info to keep with you.

A Diet for a New America, by John Robbins. I was a vegetarian for seven years after I read this. It was the start of my never ending quest to lose weight and be healthy.

Natural Childbirth the Bradley Way by Susan McCutcheon. This was my bible for years and because of it, I actually enjoyed my three natural, at home childbirths.

The Broken Cord, by Michael Dorris. When I read this, I realized that it perfectly described our adopted son. We were able to understand him better and more clearly advocate for him and his needs.

Jackson Pollock, An American Saga, by Steven Naifeh Gregory White Smith. As I said in a previous post, this one got me painting again.

The images that I am posting today are a few that I have done in the past two years that have marked significant changes in the direction of my work. The first one was painted early on and I felt that it was the first painting that really expressed what I was seeing in my head. The second, The Barn Study, is the first painting where I was able to get the combination of underpainting and glazes to really harmonize. There have been further shifts in my work more recently but I will save those for another day and another post!
Posted by Tracy Helgeson at 10:52 AM