Obituary for a Really Good Rooster 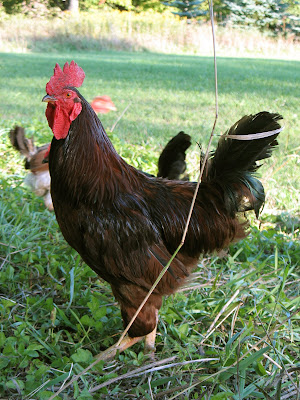 So in 2006, Doug and I decided to embrace the country life that we had been all prissy about for our previous three years here on the farm. He got bees, I got baby chicks. A surprisingly wide variety of accessories, tools and equipment was purchased. We 'remodeled' the old outhouse, built a chicken run and then received a chirping box in the mail with 27 egg layer chicks inside. Turns out that checking the chicken butts to determine which are the females is not entirely accurate and by the end of the summer we realized that we had two roosters in our flock.

After Number One Rooster in Charge (accidentally on purpose) met his untimely death, Rooster #2 stepped up to the plate and he was a very good rooster. First of all he did not attack me or the kids like the other one did, so that was good. And even though he was a little bit rough on the ladies, I always knew he genuinely cared for them. Heh. When we got several new chicks two years ago, he gave them a lot of special attention so they would feel at home, heheh. But I greatly enjoyed watching him keeping an eye on everyone while they all free ranged and he was fair but firm and he always let the ladies peck at the scratch before he did. He was also smart, over the years there have been a few times that the coop door closed before the chickens could get in for the night and he would come up to the house and make a ruckus to let us know that they needed help. It's true that chickens are not especially bright, but they are very intuitive and their instincts are a wonder to observe. More about my chickens and their antics here and here

Anyway. Every morning I go out to the coop to give them fresh water, check their food and then I throw a scoop of scratch through the wire fencing into the chicken run (they stay inside the coop until mid afternoon, so that their eggs will land in the nests rather than all over the yard). We have a routine with the scratch; when the chickens see the red scoop come out of the bin, they scatter, except for the rooster. He stands there and just takes it right on his back. Then he shakes his wings and fluffs up, rounding everyone up so they can scratch and peck.

This morning he wasn't out, which seemed odd and when I went inside the coop to gather eggs, I saw him laying dead on the floor underneath the roost. I was so shocked, as he seemed perfectly fine just yesterday! There were two hens on the roost and they were quiet and seemingly stunned. Well, I can't be totally sure of that, but they WERE very quiet. I asked them what happened (duh, rhetorical question) and then went to the garage to find a bag.

Now so far, I have been able to avoid actually handling the dead chickens that we have had over the years, but Doug is out of town and everyone else was at school. Bleh. But I manage to buck up; I picked up the rooster by his stiff legs (and yes, that was totally skeevy:)) and got him into a bag, aaarrggghhhhhh! It was awful. He was all cold and stiff so I guess he had been dead for most of the night.

I guess I will try to find another rooster. I liked having one with my flock and they are good to have around if the chickens free range. I have a few friends who raise chickens and will ask around, I guess.

Sure am going to miss my beautiful red rooster though.......

PS. and now I feel bad that I didn't take more pictures of him.
Posted by Tracy Helgeson at 9:37 AM

I'm so sorry about Rooster#2. He did sound like he had a wonderful temperament for a rooster.

He was quite handsome- sorry he's gone. When we had chickens they seem to start falling out after about 3 years- so he probably had a good long chicken life. Enjoyed reading about him!

I don't like picking dead things up either. Sorry about the Rooster passing.

So sorry about your handsome rooster. Sounds like he was doing a mighty fine job.

I don't have chickens (yet), but I've been told that without a rooster present one of the hens will step up to the plate and act like one - more or less.

As a former chicken and duck raiser I can identify with your sentiments Tracy. I great post which brought back a lot of (mostly) good memories.

Awww - we had a good rooster once. Larry. And the same exact thing happened when he died.

I'm sorry - you do miss the little personalities that come along with them!

So sorry about your handsome rooster. Sounds like he was doing a mighty fine job. Work From Home

Peace to the rooster

I love how you can make such a long post about a rooster. It makes me smile!

Thanks Sheila, he certainly was a good one.

Deborah, yeah the layers aren't laying as much and last spring a few just dropped dead. Guess I should get used to it.....

Mary, I know, ick, and naturally my husband is conveniently 'out of town' whenever something dies around here.

Thanks Katherine, I have read that too, that a hen will step up and take charge. I have been trying to figure who it is, but no luck yet;)

Thanks Richard, glad you enjoyed it and I guess you understand about dead chickens;)

Thanks Shanster, Larry?? Hehe, love that name. Yeah, sure do enjoy their antics and miss them when they are gone.

Thanks Anonymous, perfect lyrics and so true too. Love Willie Dixon!

Kristin, is that good that I can babble on and on about our rooster dropping dead? Wait until you read my post about getting the mail from the mailbox:) (just kidding, definitely nothing exciting about that except for the crazy infestation of earwigs in the mailbox every summer) There, see what I did???

blecteri, oh blecteri, where for art thou, blecteri (this is the CAPTCHA that I had to enter - hehe).

Ohh... you made me care about him.

When I was little, we had chickens. And a very mean gigantic rooster who'd come flying at us with his spurs. Man, was he scary!

Thank you for that very expressive blather, Anonymous;)

Jala, Our first rooster was nasty too and yeah those spurs are dangerous! He always attacked me and chased the kids a few times too! And that makes me miss this one even more, he was so nice in comparison!