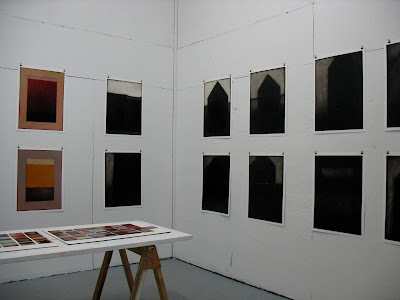 The Black Paintings ended up being Plan B (I don't consider this list to be in order of importance). I had done a bunch of black abstract paintings during 2009 (you can see a few of them here) and felt they were going in an interesting direction so had initially planned on making a ton of smaller sized black paintings at the residency.

When I got everything set up in my studio, and really looked at the space again; the big white, beautiful walls and high ceilings, I knew I would have to work bigger there. I wanted to take advantage of the vertical walls, the ability to see all my work grouped together while hanging on the wall and I also didn't want to fool around with cutting up my paper, and having to make a hundred decisions about size, scale, edges, etc. So I decided to readjust my plan, and do the black paintings on the 22x30 sheets of gessoed paper that I had brought and to accept the limitation of working in a vertical format (it could have been horizontal, but I preferred the vertical for some odd reason;)) rather than square.

The first batch of underpaintings that I did were to be color paintings and I had already decided that they would include landscape elements. So it seemed natural somehow to focus on barn like structures, in the Black Paintings. I had done this small painting: 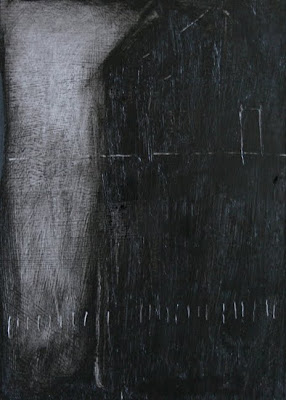 last summer which was a bit of a departure from the abstracts, but I kept thinking about it. And at the last minute, I wrapped it up and took it with me to Vermont, so I could have it to refer to.

As with the color paintings I spent a few hours making sketches before diving into the black paint. Again, doing the sketches helped; I felt the images needed just a bit of planning, not a lot but I wanted something to refer to.

This was how the first group of Black Paintings looked: 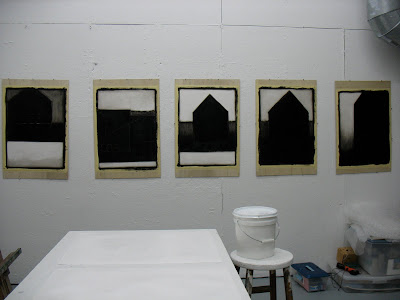 After looking at them for a few days while waiting for the paint to dry (the black paint takes forever to dry even though I mixed in some Liquin, which at least helped to make the paint easier to move around) I decided that I did not like the sections of white, which is actually not white paint but rather a lack of black paint. I felt it was too harsh and so when the initial layer of paint dried I went back into them and softened the lighter sections. I was pleased with the results of that and when I did the next batch I was prepared to keep the images darker. 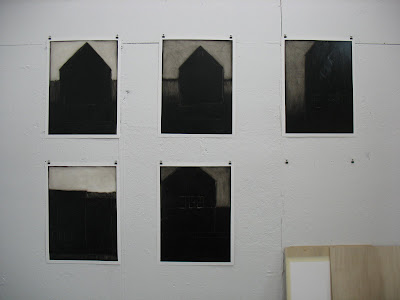 The scratches and marks into the paint have much more significance in the Black Paintings and it was a constant struggle to make them subdued yet still important and visible. Finally I settled on making more marks than I might have wanted, and then would either darken them or paint over some of them after the initial layer of paint was dry. Most of the marks evoke windows, doors, roads, telephone poles, etc., rather than the more random marks that I tend to make on the color paintings. The marks will evolve as I keep going with these.

The Black Paintings were tough but exciting too. Even though I had sketches to refer to, I still couldn't really see what or where I should go next with them. I knew I wanted to push the abstract qualities as much as possible, but just couldn't see how to do it until my hands were actually in the paint. Also with these, I couldn't really see where to go next (other than changing scale), whereas with most of my other work I have some sort of idea about where things are headed. It is good to have a different method, I know, and this was good challenge for me, even if it was a bit stressful.

The visiting artists were very enthusiastic about this series, one used the term powerful, which made my ego inflate slightly, heh. And again, as with the color landscape/border paintings, I think scale is important with these, but I am planning to do some smaller ones in the next few weeks to find out. I actually feel optimistic that the deepness of the black will allow them to be strong in a smaller format.

So these are the finished paintings, pretty much in the order I painted them. I photographed each group after I finished so can't be sure of the exact order. They are all 28x20, on gessoed paper and like the other paintings on paper, they are tucked into a drawer until I decide about doing something with them. 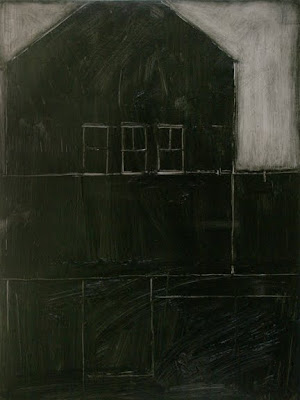 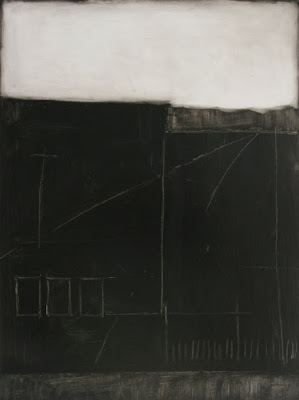 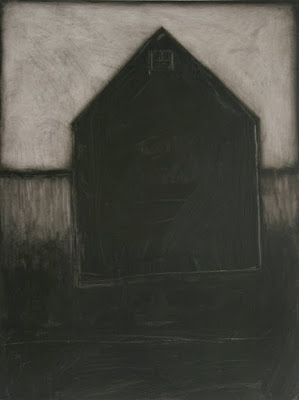 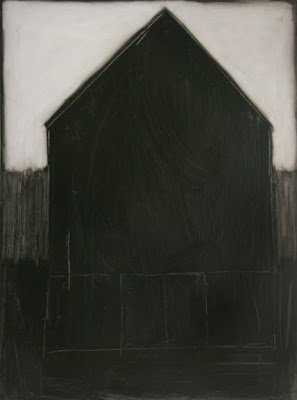 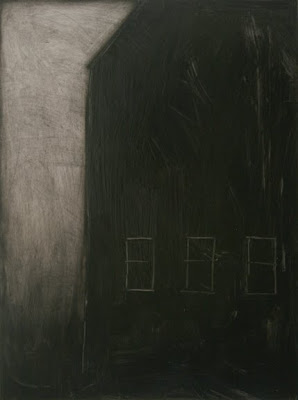 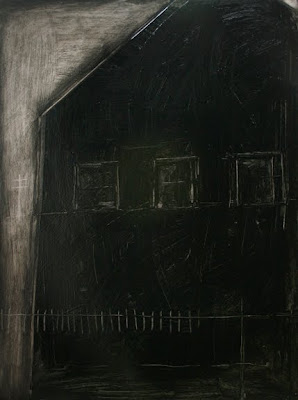 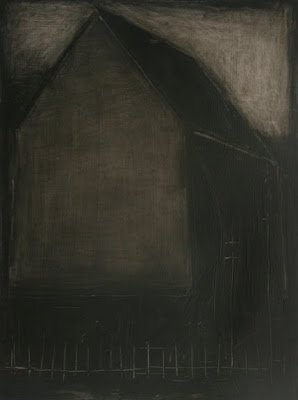 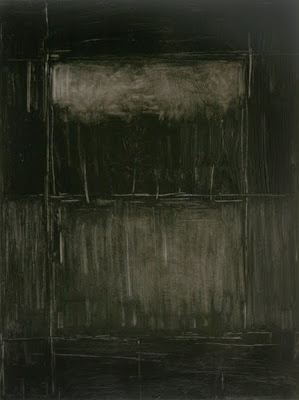 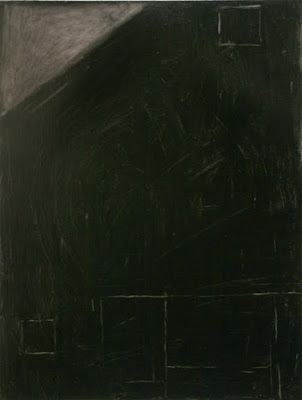 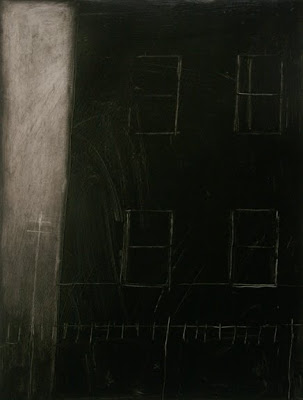 I love, love, love these black paintings. They are so incredibly juicy that it's insane!

Also--totally random nosey question: In the 2nd photo in this post--What on earth is in that enormous white bucket that's sitting on that stool?

Thanks Kesha, and I must say they are so much more awesome irl!! And that is my 5 gallon gesso bucket. It is not full of gesso though, I water down the gesso a bit so it is nice to have a large enough bucket to mix it in.

these works are really good .
and it is wonderful to see one by one .... or all then hanged together on the same wall.

The black paintings are the bomb! You know how I love them since I bought one of your black abstracts and I just love it. Again, don't let them sit in a drawer - frame them - exhibit them!

Hello... I came to your site via a link at Tina Mammoser's blog... so glad I came!

I'm a sculptor relatively new to painting (2+ yrs)... and it is good to read your thought and decision process, as these are many of the things I deal with... size, shape, marks, color/b&w, etc etc.

I am personally drawn to color, but simultaneously I want to do grey, black, off white paintings and have concluded I guess I must do both.

There are struggles in painting that are not part of sculpting... at least for me, so I am learning as I go.

Great work and thanks so much for sharing.

Thanks Caio! I like seeing them all hanging on the wall, mostly because my studio is in an attic and I don't have any vertical walls to hang my work up on, it makes me crazy!

Thanks Patty, and I suspect the Black Paintings will leave their nest someday too.....

Hi Carol, glad you came by and that you found some things to relate to in all my prattling;) So much of the work I do is intuitive, it can be a real struggle to write about what I am doing. Glad something made some sense at least! And I will be posting more about what I did at the residency soon....

Really fine images, love the hard drawn lines. I'd like to be able to walk into that nice huge space and see them all together. They 'hang well' as a single piece.

whimper...whimper...i am melting at the sight of these black paintings...they.are.incredible.

Love the black paintings, Tracy. Something mysterious and lovely about them.