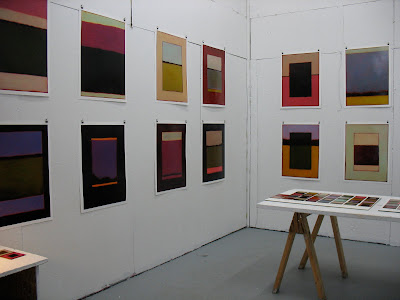 When I decided that I would be going to Vermont Studio Center again this year (I was supposed to go in 2009, but delayed it a year for financial reasons) I realized that I ought to have a better plan in place concerning the work I wanted to do during my month there. Last time my big plan consisted of 'doing some portraits'. I had no back up plan in case I began to flounder with the portraits and since that is exactly what happened (I floundered!), I had to scramble to find some other things to do while I tried to figure out which direction to take with the portraits. I don't want to say that my time at VSC was wasted last time, because by the end of the session I had found an interesting path to the work that eventually became the 'People You Know' series. However, I certainly would have liked to have been more productive during that month.

So, keeping that in mind, I put together a few plans; A, B,C,D, and even an E just in case. My slacker days needed to be over and I wanted to really kick some painting butt while I had the chance! At first I considered the People You Know series to be Plan A, the plan I wanted to focus on. But when I got there I started to work on these abstracted paintings right away, they were bubbling right at the surface for me; images I had been thinking about for awhile, a step back into landscape elements, yet also looking ahead to the more abstract images that I am interested in as well.

I took a few small paintings along with me that I did several months earlier and thought were a good starting point: 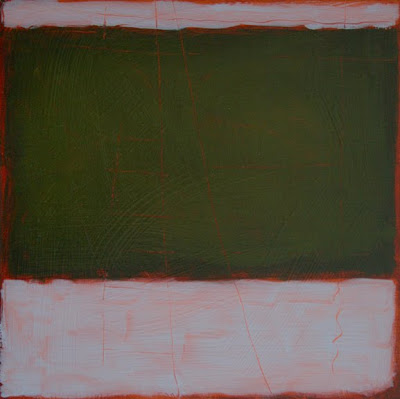 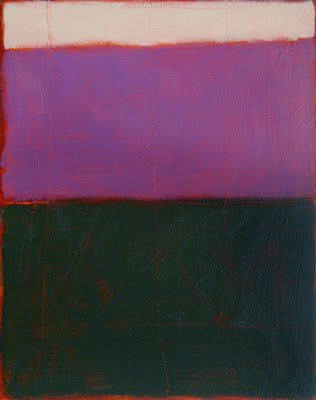 but despite having those to refer to, I panicked slightly on the first morning in my studio. After seeing things in my head for so long, I wasn't sure I could translate them into something outside my mind. So I spent that morning doing some sketches just to block out some shapes and edges. I do not normally sketch before I begin a painting as I tend to lose my enthusiasm and spontaneity when I get to the actual paintings, however it was the opposite this time. I did a few sketches and immediately got to work on the first four underpaintings: 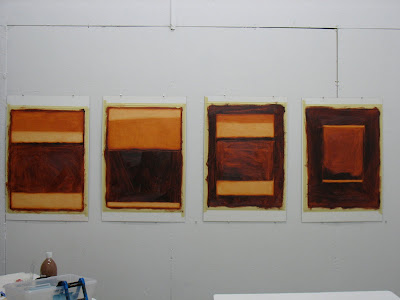 I was pretty excited about them, but of course my crazy process makes me have to wait for the next step, so while the paint dried on those for the next few days I began work on Plan B (more on Plan B in the next post) and then started three more underpaintings: 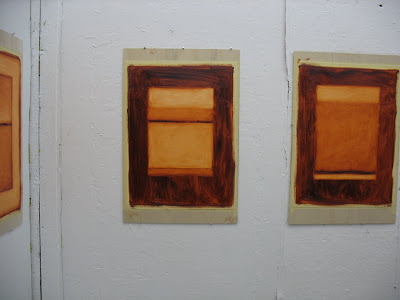 While THOSE were drying I went back to the first ones and added the color glazes. The first two were similar (to me anyway) to the paintings I had brought from home which I used as a touchstone throughout my time working on these. So the first two: 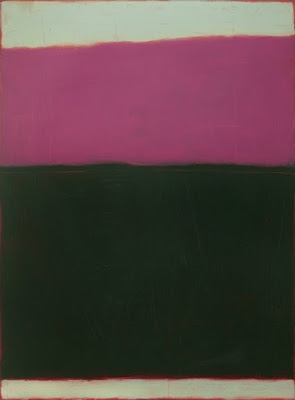 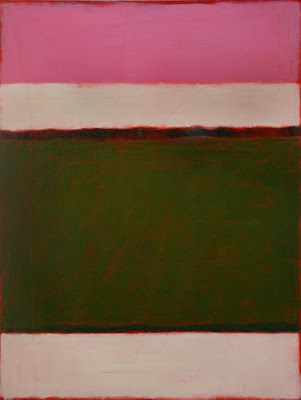 seemed just a few steps away from my Horizon Line series, although later on I would learn that others saw them as very abstract and one of the visiting artists said that she didn't even view them as landscapes at all until I mentioned the influence.

Anyway, the next few had borders: 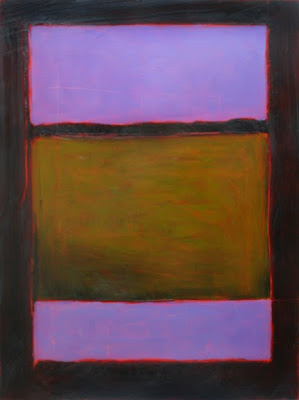 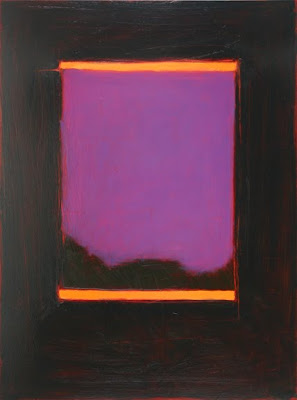 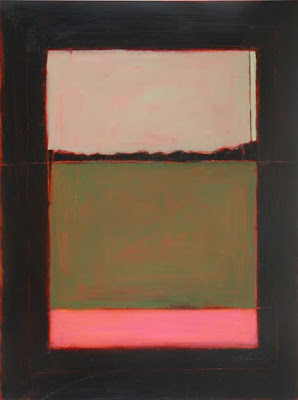 which as I mentioned in a previous post, seemed window-like to me, I was thinking of the views OUT of the barns I paint, or out of my home and studio windows. Dark inside, looking out to the bright day. But as I did the last one in that group: 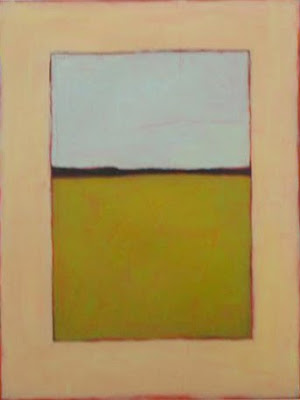 I used a lighter color in the border and then I thought of the landscape as an image on a wall, or in a frame. So I tried to push that theme in the last group that I did: 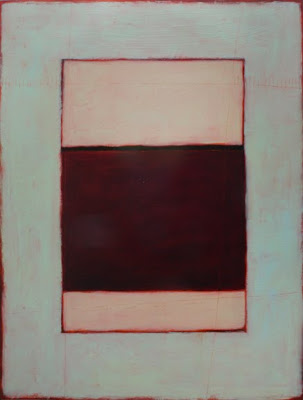 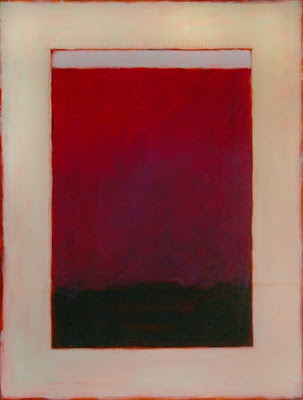 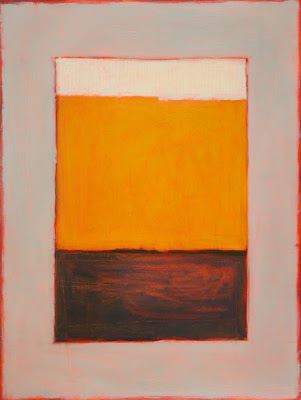 One visitor mentioned that the space seemed to either recede or come forward depending on the color of the borders but then was flattened because of the surface marks when viewed at a closer range. I am not sure if that was meant as a compliment but I chose to take it as one. Heh. And I have decided now that I really, really like that element.

The other border pieces seem to fall somewhere in between indoor and outdoor and I think they became more about color: 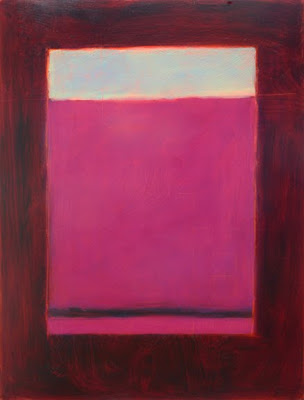 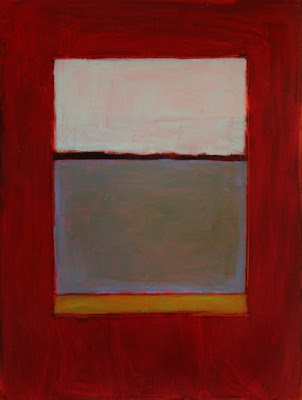 And with a few others, I decided to toy with placing the landscapes in the border and indicating the interior as a window referring back to the dark windows of my barns: 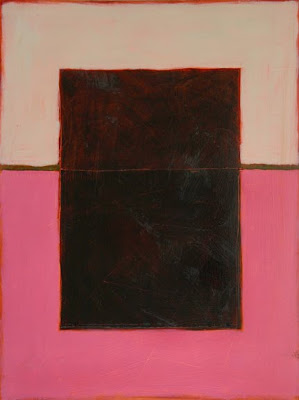 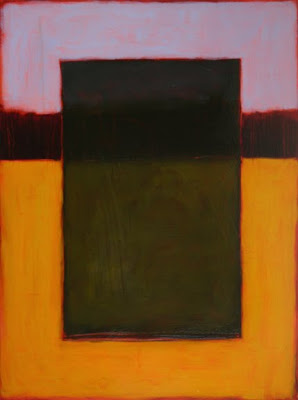 Not quite sure that I like these as much but it was interesting to try them and I think there is something there to pursue at some point.

And one last landscape: 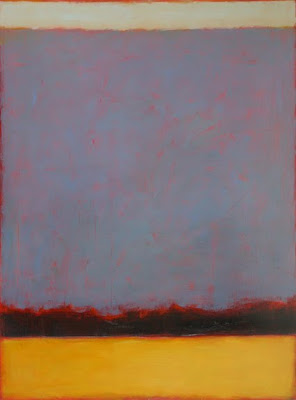 Well, at least it looks like a landscape to me, heh.

I did these all on gessoed paper and after masking off a one inch border, the actual paintings are 28x22. I viewed these as fairly experimental so that is why I did them on paper and is also why they are now all tucked away in one of my flat file drawers. It also accounts for my amazing lack of creativity in naming them, untitled with numbers were all I could come up with here! But after I finished these pieces in Vermont, I felt pretty excited about the direction as a whole and so I decided to do a few on some smaller sized panels that I had also brought "just in case". Painting on panel always feels better to me than on paper, and working on a smaller scale was an interesting challenge with these as well. So these are 12x6 and 10x8: 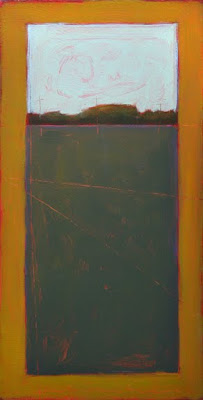 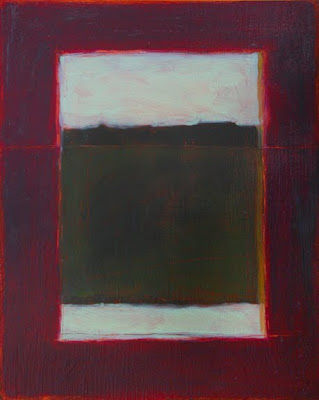 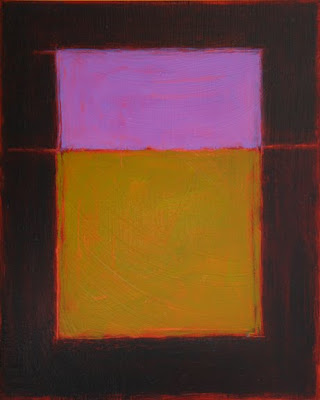 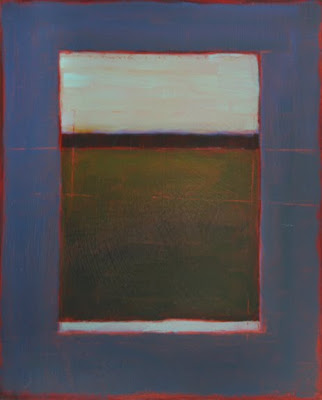 and while they have less 'presence' than the large ones, they have a more intimate feeling, not unlike what happens in my landscape/barn paintings when I change the scale.

I am pretty excited to continue on with this series and am planning to do some more, on panel and in some more mid range sizes although Doug says they should just be big! I think he may be right......

Oh and PS. I did a LOT of scratching in the surface of these paintings too. Just so you know;)
Posted by Tracy Helgeson at 7:53 PM

Your time was very well spent there, Tracy. I love these.

My favorites are the pieces with the light borders esp. the first one. It would be a shame to just keep them in a drawer. You need to frame these pieces and show them.

A post like this makes me schedule a chunk of time to go there, be there. I'm so looking forward to this chunk. Later...

Amazing productivity. I love reading about your process.

Thanks Cheryl, I am VERY happy with how much I accomplished there too. It was such a good time for me to go, I needed it;)

Thanks Patty, I received a lot of positive remarks about those too. And I'd like to do something with them, but until I have something lined up I can't just get them framed, way too expensive. Plus I hate frames on my work. We'll see what happens.

You should go, SamArtDog;) Just go. Winter is best, no outdoor distractions......

Thanks JoAnna! Crazy process, I think you mean;)

How is it that no one, not even you, Tracy, has yet mentioned Mark Rothko here? Especially if Doug says these need to be bigger, because that's going in further in the direction of Rothko. I know his name came up earlier when you were first doing these abstracts, but now that you've added a border on some of them, wow, you're just going all the way into Rothkoville. Tell Doug to watch you around the knives in the kitchen!

I understand that the process of getting from where you were to these seems organic and natural, but you've got to take a step back and realize you're recapitulating Rothko with some Albers thrown in. This isn't a bad thing if you go through them and into some place of your own, but I think you need to see what you're doing, at least. Maybe you should spend some time looking at Rothko and Albers, figure out what you're doing differently, and think about that.

The scratchy black paintings from the following post also remind me of someone but I can't put my finger on it yet.

Thanks Chris for your feedback. Actually a few people mentioned Rothko to me in VT; JT, two of the visiting artists, and Doug and I discuss it occasionally.

I am criss crossing a bit with Rothko's work right now, just as I have done once in awhile over the years. But I am simply painting, doing my own thing without putting my work in any kind of historical context.

Of course there are worse comparisons to be made, so thanks;)

I figured someone had to mention him to you at some point; I just thought, with this long post with plenty of examples, it was impossible not to mention him. Especially since you're moving closer to his work, not farther away. That's why I thought I had to say it.

You don't need to try and put your work into some kind of historical context. In fact I'd recommend against that for any artist. It's not your job and it's not necessary. But it is a good idea, I think, to look at other artists when you've got obvious affinities. I'm not a huge fan of Matisse, but I look more closely at his work since so many people suggested I resemble him.

In your case, too, you reached your Rothko-like paintings by a very similar route to the one he himself took. His favorite painter was Matisse, and Rothko eventually took as his subject the walls of Matisse's interiors. Rothko's most famous paintings are just extreme close-ups of a Matisse background. The connections between walls and abstracts, and landscapes, is undeniable.

Keep in mind, too, that you've got some Albers in there also. You should look him over. See what he can tell you. Not to put yourself in context, but as one craftsperson to another -- see what he's learned and expressed in his paintings, and see if you can learn from it, too.