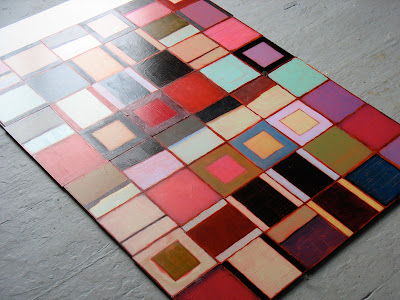 Plan D was actually the first project I had planned for my time at Vermont Studio Center. I have wanted to sit down and focus on my mark making for a long time so I merged that with an old concept that I had briefly worked on a few years ago involving small squares of colors. I lost interest in that as it didn't really do what I had imagined it would, but I kept thinking how I wanted to put tiles together. So when the scratching became a stronger element in my work, I combined the two ideas and saved it for Vermont.

Over the past year, I have had all kinds of plans about how to set up the project but eventually I simplified it as much as possible and decided to refocus on the mark making aspect. And because I wanted it to be all about process, meaning I wanted to expand my mark making skills without feeling compelled to refer to those marks in future work, I decided to make it a give away at the final open studio at VSC. In keeping with that I also decided not to document the pieces, and only took a few general photographs of the project as it progressed. I wanted this to be all about my internal process. 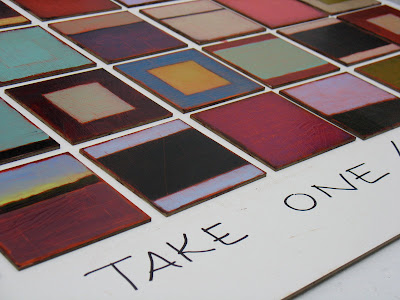 So, process. I stocked up on about a million 4 inch squares. Well actually only 120 but it seemed like more. Heh. I also had some larger squares which only made it to the underpainting stage. I had planned to have them all gessoed before I left for Vermont but things got crazy busy before I left and so I ended up having to do all the prep after I got there. Then it took me several chunks of time over a few days to do the underpaintings and I admit to being mighty sick of the whole thing by the time I finished all of those! I didn't have a specific plan about the composition on these and I did do a few that would end up being one color as in my original idea. But I then decided to incorporate some of the more abstract elements that I was also doing in the border paintings; small sections of color at the edges, borders, contrasting squares in the centers, etc. I did at least a dozen of each composition, knowing that color would differentiate them later. By the night of the first open studio, I had all the underpaintings finished along with the first layer of glaze. Unfortunately I don't have a photo of that but this one has a bunch of the underpaintings in progress as well as a few that already have color: 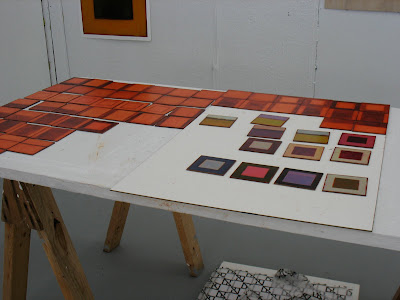 Things in general after that got pretty hectic, I had all the other work going on plus there were artist talks, readings, etc so unfortunately I put off doing the color and scratching on these for just a bit too long. I ended up doing far fewer of the squares than I had planned and on one memorable night I seriously considering bailing on the whole thing entirely. But the next morning life seemed was all bright and shiny again and I decided I could do it after all. (Note to self: Never make any decisions after 1am;) I counted out how many I needed to have finished so that all the residents and staff could each take one and just focused on doing those. I ended up finishing seventy-two of the 4"x4" squares. 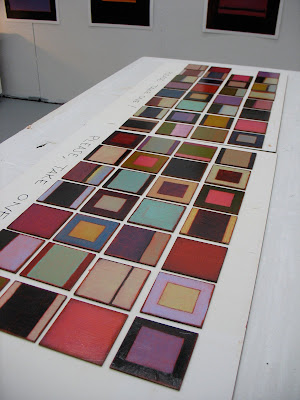 It was really a challenge to feel like I was varying the colors as well as the marks in each one. Um, especially after about #43. I settled on making very small shifts in color and by the end, both the marks and the color got pretty minimalist. There are a few squares floating around out there that only have one scratch running right down the center. Heh. I also learned that the most successful marks tended to be the random ones, marks that were not very representational, and that really carried over to the marks I made on the other paintings as well as what I have been doing since I have been home. I tried using some different tools to make the marks, but for various reasons I ended up preferring the little rubbery pointed tool that I was using in the first place.

My self imposed rules for Plan D were:

1. All the give away pieces would be on 4 inch square panels.

2. Because the project was to be all about process I would be giving away all the panels, without documenting them.

3. I also decided that I would stick with the initial colors that I chose for the glazes, no wiping off the paint to change the color and no working back into the painting later. Whatever I put down first, I had to make work. This was somewhat of a time saving rule;))

However, it turns out that the whole thing ended up being so much more than my process and it had such wonderful and unexpected results. In some ways, I think Plan D was really the most valuable project for me in Vermont and gave me some really good things to move forward with.

The unexpected things that happened here were:

1. They looked AWESOME all grouped together! I had always pictured this project as being only squares of solid color so I was very surprised to see how the small patterns on each square formed so many larger patterns. It was also interesting that the panels even worked together at all, considering they were all painted with no thought about how they would fit together later. 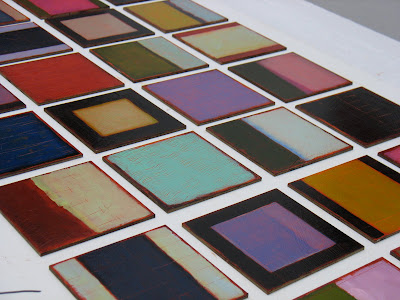 2. More than anything I wished I had been able to observe and possibly document the other residents as they were choosing and deciding on which one to take (I wanted to see the other resident's studios so I couldn't be in my studio the whole time). I was able to be there for awhile though and it was really interesting to watch a few people making their choices. Some people would pick out one, then change their mind a few more times before deciding on one, others connected with one particular piece right away. SO much more to do with this aspect of the project! 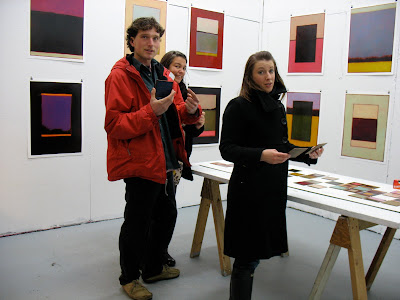 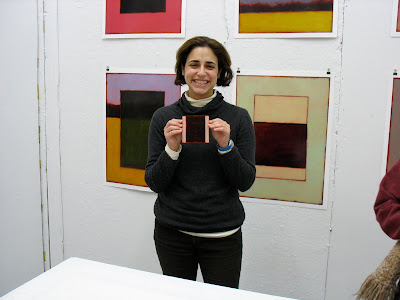 Marcie Kaufman showing me her choice.

3. As I was walking through the other studios, other residents were so excited to show me which square they selected and it was fascinating to find out why they picked a particular painting. I think this was the best part; immediately seeing hearing why and how a fellow artist chose something I had made. Sometimes I feel a bit removed from that aspect of my work; why someone finds a certain piece appealing.

4. I was secretly glad that the all black piece ended up as one of about 10 leftovers. It was my favorite and is now part of MY collection! 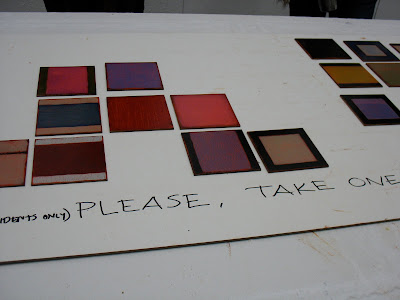 So Plan D gave me so much more than I had imagined it would. Now that I am home and eying the balance of the half finished 4 inch panels, I am working on some ways to incorporate these other elements into this fourth new direction that I have going.

Those all really do look well together. And, isn't it interesting how something you think will go one way, goes in another direction. I love all of the 4-inch paintings!

This is just too cool! Thank you for sharing the story of these little paintings. Very inspiring! I love that you got to keep your secret favorite one, too.

one more exellent series . and very consistent with your work .

Though the choices in your 50%-off sale last year weren't 4x4s, choosing one from the many was very much like this VSC project, i.e., a happy challenge. And once again, I'm struck by how your flat file drawerful of those paintings keeps showing up. It made a real impression on me; I guess on you, too. Crazy how the mind works, eh?
Some things bear repeating. You could say, they insist on it!

They look so great together - I really hope you think about incorporating this idea into your future work - it would be exciting to see! Thanks for sharing your residency experience.

Ted and I love our squares. We have them up in the kitchen.

These are great! I can see why someone would have a very hard time deciding which one to cherish!

Totally cool story. I also love how they looked all together...possibly a new direction for future project(s)?

you are a generous soul!! the paintings look fabulous too!

Thanks everyone! Glad you all appreciate this project and how fun it was despite the late nights;) And well, I love both sides of giveaways, so that was fun too!

Tracy, I've been enraptured with your whole residency project (and a little jealous) this whole time.

These are SO amazing! And you've really inspired me so I hope you don't mind if I steal you idea a bit and do some pieces to give away at my next open studio. I'm excited because it's my first in my new space, and the last event in a busy spring season. This could be so much fun to do. :)

Steal away Tina! I personally think EVERYONE should do art giveaways, especially when I am around, hehe;) Good luck!

I've identified mine in two of the photos!