Doug and I arrived in the Hamptons on Wednesday. We first stopped in Southampton so I could meet the gallery owner that is trying out my work. She shows some very nice work, mostly pretty realistic imagery. My paintings (she has two) looked good and she said they have received a lot of attention, however neither have sold yet. Of course it is a slow summer for sales (stupid economy) and I think they will do better if she decides to take a few more paintings, so that they will make more sense.

Anyway, we had some extra time before dinner and even though our reservation was for the next day, we decided to drive out the Pollock Krasner House. We found it easily, it is very close to the road and I have to say that we both were a bit overwhelmed to see it in real life. I guess that sounds silly, but we have both read the books about their life there and have seen the movie, so we feel close to it all somehow. And knowing that the art that was created there had a profound effect on the course of American art, well that was just amazing.

Turns out we brought the cold rainy weather with us to the Hamptons so my pictures look a bit dreary but I am putting up the photos that I took of the house and yard. No cameras are allowed inside the studio, so Doug and I posed for cheesy tourist photos outside the studio building: 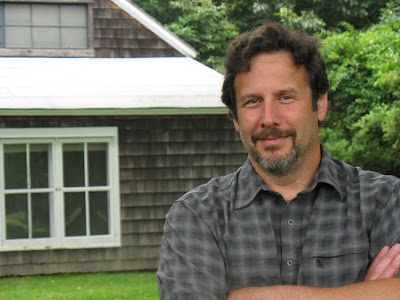 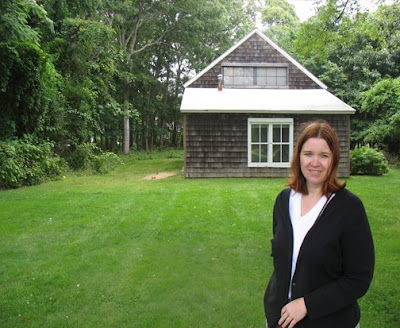 Images of the interior of the studio can be seen here.

So, like I said the house is pretty close to the road; there is a hedge in front and I was standing right at the end of the driveway when I took this one: 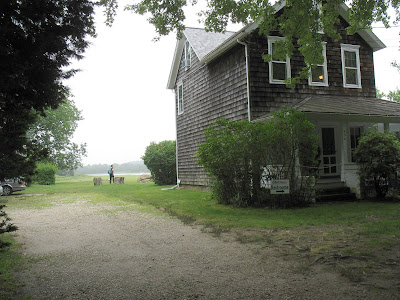 To the left of the driveway are several outbuildings (including the outhouse that they used for several years-the house had no plumbing or electric when they moved in). The studio is the wood shingled building: 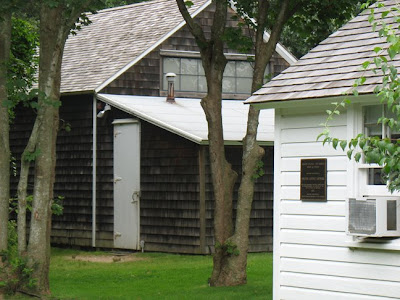 This is the view from the back of the house: 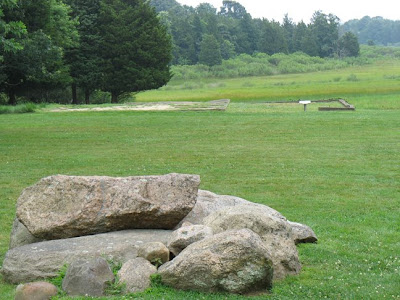 The boulders are the same ones where the photograph was taken of Jackson Pollock (with Ruth Kligman) on the last day of his life. Beyond the boulders you can see the previous foundation of the barn/studio, which was moved because it was blocking the view of the bay from the house. The foundation is also where Jackson was filmed while painting on glass so that his face could be seen while he worked; the event that set him off on a brutal drinking binge.

The back door of the house opens right into the kitchen: 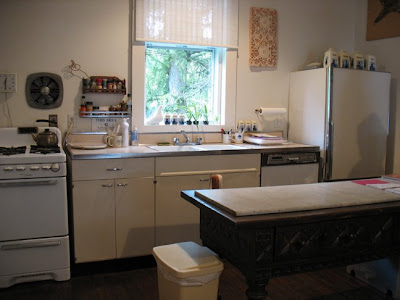 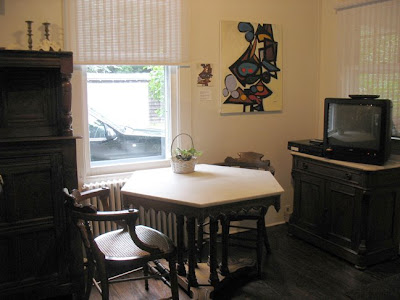 Evidently the house has been preserved pretty much as Lee Krasner left it. She lived and worked there until her death in 1984. She also worked in Pollock's studio after his death and bits of her colors and marks can be seen on the walls where she painted. Seeing that was awesome! As much as I appreciate Pollock's work, I actually like Lee Krasner's work better.

Anyway, the kitchen is open to the dining room where there is a huge round table (they had many guests out in the Springs): 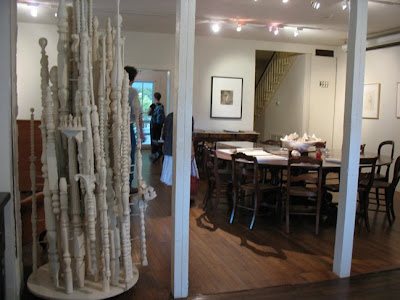 and to the left hangs the anchor they found on the beach. This is the spot where an iconic photo of Jackson and Lee was taken: 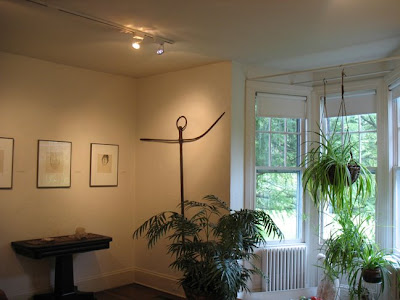 And beyond the dining room is a small living room. There are shelves filled with books and and Jackson's extensive jazz record collection. Unfortunately, I got rushed through that room, I would have liked to have spent more time looking at the books and records..... 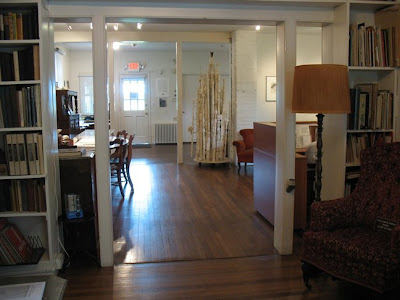 Upstairs are two bedrooms. This is the one that Jackson and Lee shared (they had twin beds!): 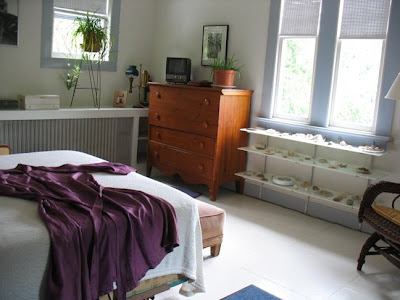 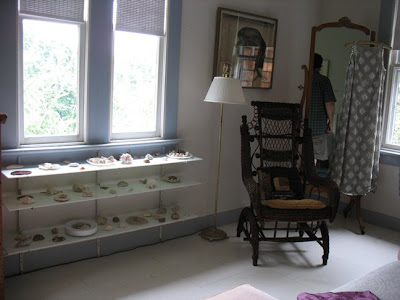 And Doug was intrigued by the old suitcases: 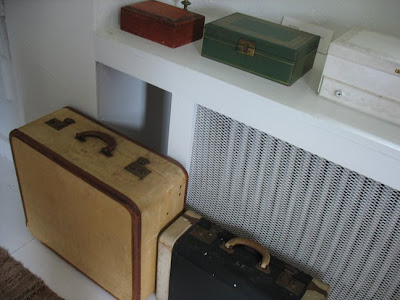 and when he looked closer, he insisted I photograph this: 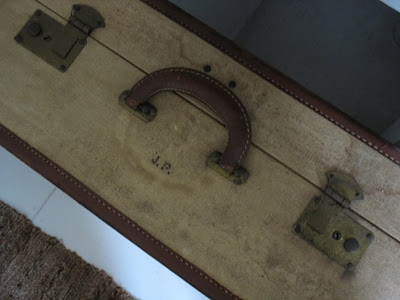 The other bedroom was initially Jackson's studio when they first moved into the house (Lee worked in the kitchen) and after he began working in the barn, Lee moved into the room. I wish I had gotten better photograph of this room. It looked as if it had been used as an office space later on by Lee, and was pretty basic. 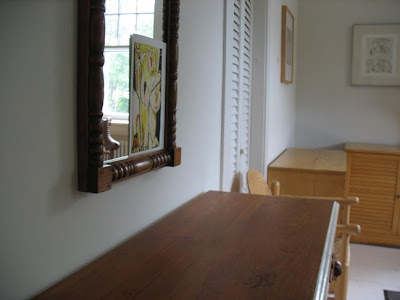 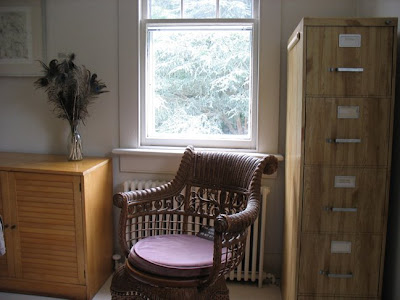 I liked the house quite a bit. The rooms are all open and it feels very spacious. It is very simple and spare and I envy that. I tend to want a lot of things around me, plus we have four kids so there is a natural clutter that follows us around. But someday I swear I will live in a clean, white sparse space. Well, maybe.

Our little tour group spent quite a bit of time in the studio. We all put on super fashionable foam slippers and walked on the actual floor that Pollock painted on. There was a written and pictorial history of both the working habits of Jackson and Lee. The light was amazing and the space really had a good feel to it. I wanted to stay and paint!!!

Seeing this house and property in person had a profound effect on both Doug and I. I wrote about the connection I felt to their move out to the country here. So funny to read this old post now but actually I still feel the same way about creating art on the beautiful farm where I live. Unfortunately, Doug has neglected his art in the years since we moved here and so we spent some time on the drive home making some plans concerning OUR barn for his use (seems like the separation is on hold, more on that another time).

Our day was not over but I think I will save the rest for another post. Must. Paint. Now.
Posted by Tracy Helgeson at 4:12 PM

Inspiration is a wonderful thing--paint on, Tracy!

Thank you for the tour! What a quiet, peaceful location and house. Quite different from Pollock's life. For some reason, that suitcase sent a little ripple of energy through me. Perhaps, one day, someone will want to photograph my suitcase.

Amazing post! I saw the Pollock movie with Ed Harris a few weeks ago and felt compelled to read his bio. I can't imagine the chills you felt being there after reading about them as well as seeing their story on the big screen. Thanks for sharing with us others who may never get the chance.

p.s. I also enjoyed Lee's work much more than Jackson's.

very cool post tracy. kind of got chills looking at all pictures. good but hard movie to watch, hard lives are never easy to look back on. what a cool thing to do.
was the krasner book interesting? i dont know anything about her. (what book was it?)

i loved seeing your photos!!

Kim, I admit to imagining people wanting to tour my home and studio after we did this ;) I should go get my luggage personalized just in case, hehe.

Melody, I LOVED the movie! And with the exception of some of the interiors (which were duplicated very accurately) the movie was actually filmed there on the property.

Also, Lee had much more time (and was sober) to really develop as an artist, which is partly why I respond more to her work I think. It has much more breadth to it than Jackson's, I think.

Paula, glad you liked it, love how everyone responds to seeing how and where artists work. I am not aware of a book specifically about Lee Krasner, although I suppose there may be one. I have one that shows her work and her life is discussed pretty thoroughly in Pollock, An American Saga, Pollock's biography. I highly suggest the book, if ya got a few months to plow through a big heavy duty book ;)

Thanks, Randel! And my secret may be out now, I actually can take really good photos if I have to ;)

Thanks for the tour! I loved seeing the photos. It sounds like a nice trip in many ways.

I have always loved to read your blog, although I never comment. (I think that is called lurking???) In this post your tour of Pollock's home and insights of his life were interesting.It made me want to read the biography. Your click back to your story and your sensitive, porous nature (on all your blog posts) is compelling. It's unusual to feel as if you know someone through her/his blog. Best of all your work is awesome. Thanks for taking the time to share. L