More Adventures in Painting (The Walls)

So a few weeks ago our oldest son finally moved out and into a residential home on the campus of the school that he goes too. Due to a variety of reasons, it took years to get him into a placement (he is 20, mentally disabled and will always need to live in a supervised setting) and by the time he moved, everyone's nerves were frayed from the waiting.

But his small, dark cave of a room turned into a good project to distract us (well me, really, I did most of the work). 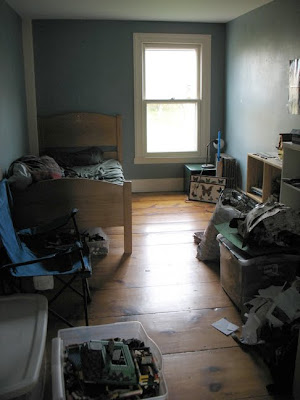 My daughters have always shared a room and were pretty happy for the opportunity to each have their own room. Actually, 'over the moon' comes to mind. Heh. It was decided that Ginger, the youngest, would get my son's old room and that Sophie would stay in the old one: 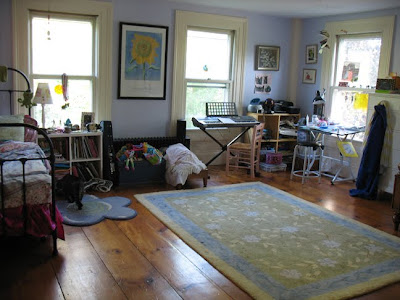 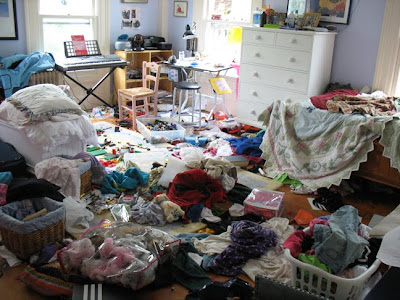 For the longest time Ginger wanted her new room to be lime green and so I was envisioning that too. At the last minute, like the day before we bought the paint, she decided on an aqua color. Ok. As I was rolling the aqua over the dark blue walls, I thought it looked great, but after I did the whole room, I thought I was gonna die: 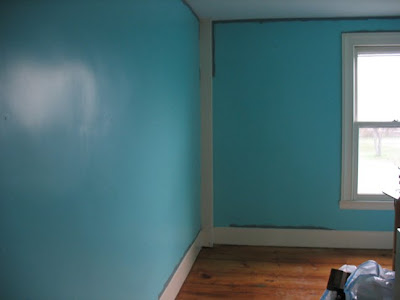 This picture does NOT express the full spectrum of that first color. It was like a hopped up, drug induced, blue light special version of Kmart blue/green. It was SO intense, the room seemed to vibrate. Even though the aqua was lighter than the previous wall color it was still too dark and way too vivid for the small room. I told Ginger that we would have to paint the room the lighter shade of the same color. She went all drama queen on me, but I put my foot down. That crazy color was spilling out of her room and making the whole hallway blue, I couldn't bear to look at it every time I walked up the stairs. So I did the second color and it was just right, even Ginger (eventually) agreed. 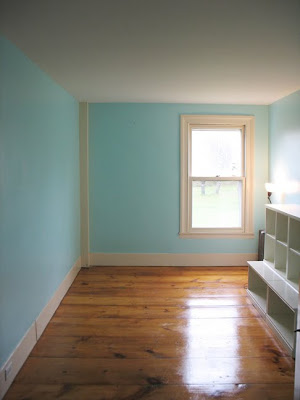 So we got her all moved in, a new rug from Pottery Barn, and a lot of shelving for her stuff (we put HER in the small room to help curb her hoarding tendencies;)) and viola! A bright, cute and shiny new bedroom in the house! 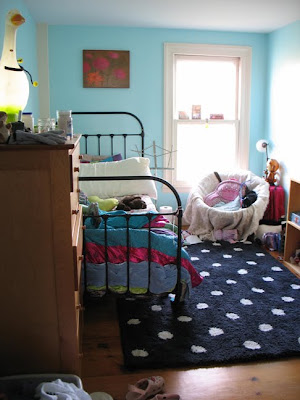 And naturally since she got a new room, the old room needed an update too. I loved the soft periwinkle/lavender color that the girls picked out when they were 4 and 6, but Sophie had visions of something different now. 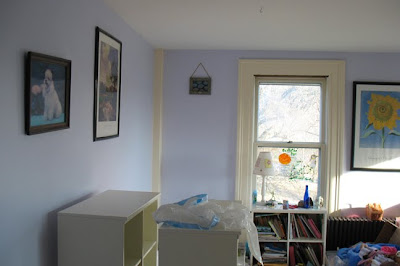 I talked her out of red, then out of black (!) and we settled on orange. She picked out a color card and I ok'd it. After our experience with the first version of aqua, I was a bit concerned that the orange was going to be prison jumpsuit or traffic cone orange once it was on the walls, but it turns out that is was a food kind of orange. White trash food, to be specific. Heh. Depending on the light I was thinking Velveeta, Cheetos, Cheez Whiz, Orange Creamsicles, etc. for the several days that it took to paint this room. And omg, I thought the painting in there would never end; it's a large room, about 17x17 and had four windows plus the doors. Lots of edges! And it turns out that that periwinkle was more intense than I thought. I had to paint three coats of the orange before it finally stopped showing through. Which means three times around all the edges. Gah!!! I guess I should have primed the walls first, but I still would have been painting that room three times so that wouldn't have made much of a difference.

I spent a whole day cleaning and sorting through the rubble that had been left (we are instituting new and very strict 'clean your room' rules), and rearranged the remaining furniture. Found a nifty new rug (at Target online) that reminds us all of the Yellow Submarine animation and viola! A second bright and shiny new room! 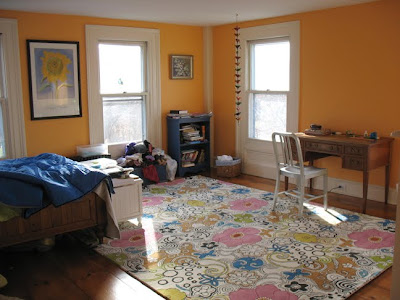 I am incredibly glad that this round of painting is over, there were no injuries, only a few pulled muscles, no major paint spills and no footprints or pawprints tracking the splatter throughout the rest of the house.

But now I notice that the kitchen could use a bit of brightening up too.......

And PS. Read here for what happened when I repainted my old studio/new living room. And here is the room all finished.
Posted by Tracy Helgeson at 9:23 AM

Love the "real" picture of the girls' room. I had a friend in high school whose house was burgled. When the police got to her room, they thought it had been ransacked.

OMG... Tracy what a fabulous post. I know well the trauma of picking colors for teen bedrooms... the spin it can create on the whole house. We are moving to a new house right now and I've been painting my heart out on the new rooms... covering pepto bismol pink in a few rooms! Gah! So far I've done 5 rooms (including a stairwell), so I can sympathize with the pulled muscles etc.
Since we are moving to acreage I've been enjoying your chicken posts! And the reality shot of the teen bedroom is the best ever!

haha, Meno, I have heard similar ransacking stories too! And hey, are you on FB yet???? Friend me!

Ruth, thanks and I am glad to hear fom someone who has also done so much wall painting! I painted the whole interior, trim and all before we moved in and was so traumatized by the end! 6 years later but it is still painful to pull out the supplies and start another room. I have great respect for those that do it for a living! PS. Sorry about the pepto-bismo pink, pink is always a struggle to enjoy;))

Too funny Robyn! Guess I should go back in and sign them to get the full effect, huh???

Delurking to say I like your landscape painting and the glimpse of your studio....as a fellow wall painter, one suggestion: tinted primer. It is a guarantee, but it helps.

The rooms turned out beautiful! I even noticed one of your paintings in Ginger's room.

Hey! WE are painting our living room, kitchen and bedroom... after 8 yrs of living with the other colors. Isn't it gross to discover your baseboards get THAT dirty??

And - I wanted yellow... but it looks very much like mac n' cheese ala Kraft cheese powder... just like your daughter's room. I hope I like it when it's done...

My favorite photo is the un- retouched way the room looked when allowed to "evolve". heheh
Our kids room look the SAME way.,

Her bedroom is gorgeous! Please, what color is that orange? I've been looking for an orange for my living room that doesn't make me feel nauseous and I think that might be it.